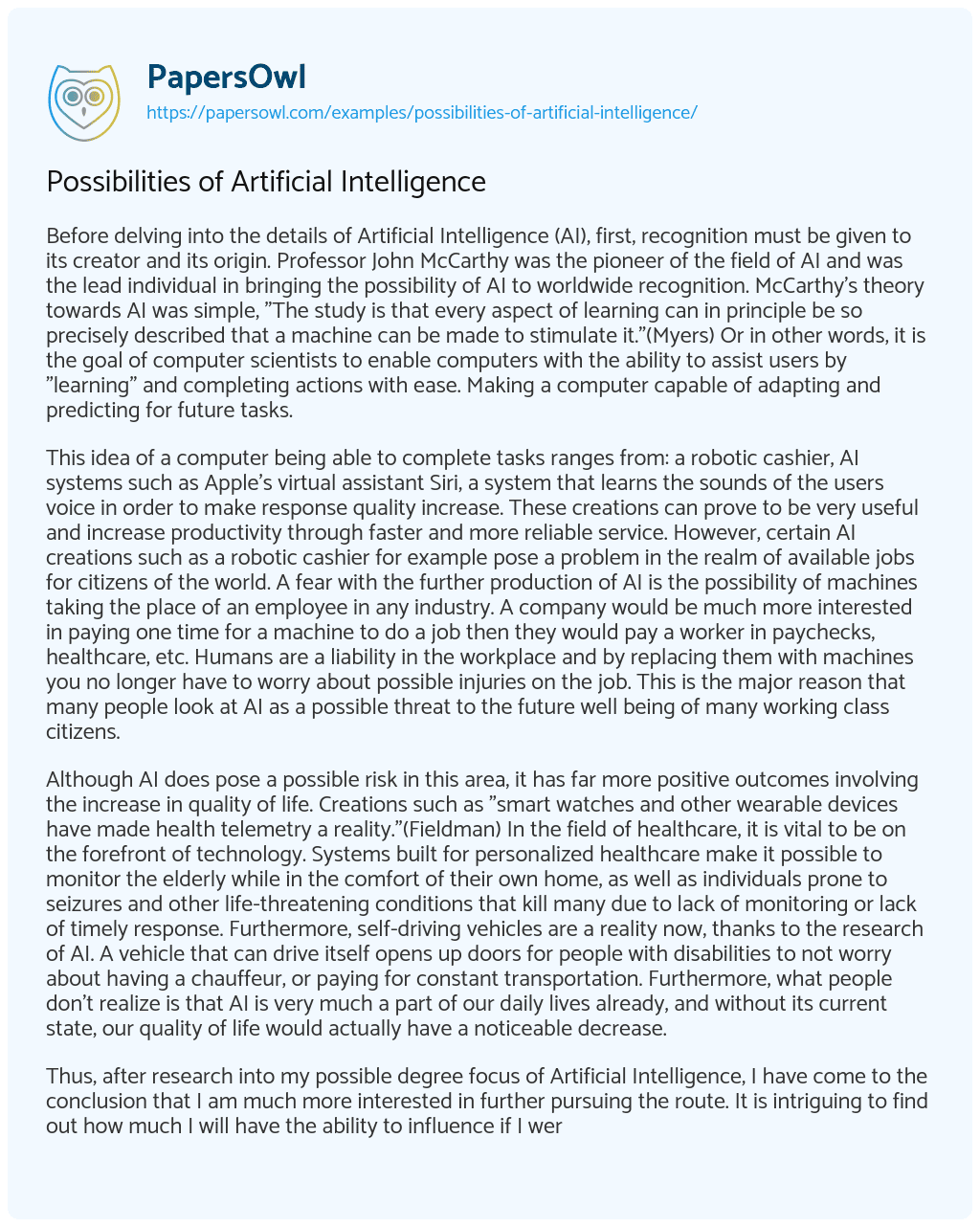 Before delving into the details of Artificial Intelligence (AI), first, recognition must be given to its creator and its origin. Professor John McCarthy was the pioneer of the field of AI and was the lead individual in bringing the possibility of AI to worldwide recognition. McCarthy’s theory towards AI was simple, “The study is that every aspect of learning can in principle be so precisely described that a machine can be made to stimulate it.”(Myers) Or in other words, it is the goal of computer scientists to enable computers with the ability to assist users by “learning” and completing actions with ease. Making a computer capable of adapting and predicting for future tasks.

This idea of a computer being able to complete tasks ranges from: a robotic cashier, AI systems such as Apple’s virtual assistant Siri, a system that learns the sounds of the users voice in order to make response quality increase. These creations can prove to be very useful and increase productivity through faster and more reliable service. However, certain AI creations such as a robotic cashier for example pose a problem in the realm of available jobs for citizens of the world. A fear with the further production of AI is the possibility of machines taking the place of an employee in any industry. A company would be much more interested in paying one time for a machine to do a job then they would pay a worker in paychecks, healthcare, etc. Humans are a liability in the workplace and by replacing them with machines you no longer have to worry about possible injuries on the job. This is the major reason that many people look at AI as a possible threat to the future well being of many working class citizens.

Although AI does pose a possible risk in this area, it has far more positive outcomes involving the increase in quality of life. Creations such as “smart watches and other wearable devices have made health telemetry a reality.”(Fieldman) In the field of healthcare, it is vital to be on the forefront of technology. Systems built for personalized healthcare make it possible to monitor the elderly while in the comfort of their own home, as well as individuals prone to seizures and other life-threatening conditions that kill many due to lack of monitoring or lack of timely response. Furthermore, self-driving vehicles are a reality now, thanks to the research of AI. A vehicle that can drive itself opens up doors for people with disabilities to not worry about having a chauffeur, or paying for constant transportation. Furthermore, what people don’t realize is that AI is very much a part of our daily lives already, and without its current state, our quality of life would actually have a noticeable decrease.

Thus, after research into my possible degree focus of Artificial Intelligence, I have come to the conclusion that I am much more interested in further pursuing the route. It is intriguing to find out how much I will have the ability to influence if I were to be a professional in the field. The main interest to me is the aspect of creation; I will be able to create whatever I want and give it a purpose. Artificial Intelligence has the potential to increase the quality of life for humans in a way never before seen. Advancements in the field already influence our day to day lives in ways that people don’t realize.

Use of Artificial Intelligence in Radiology