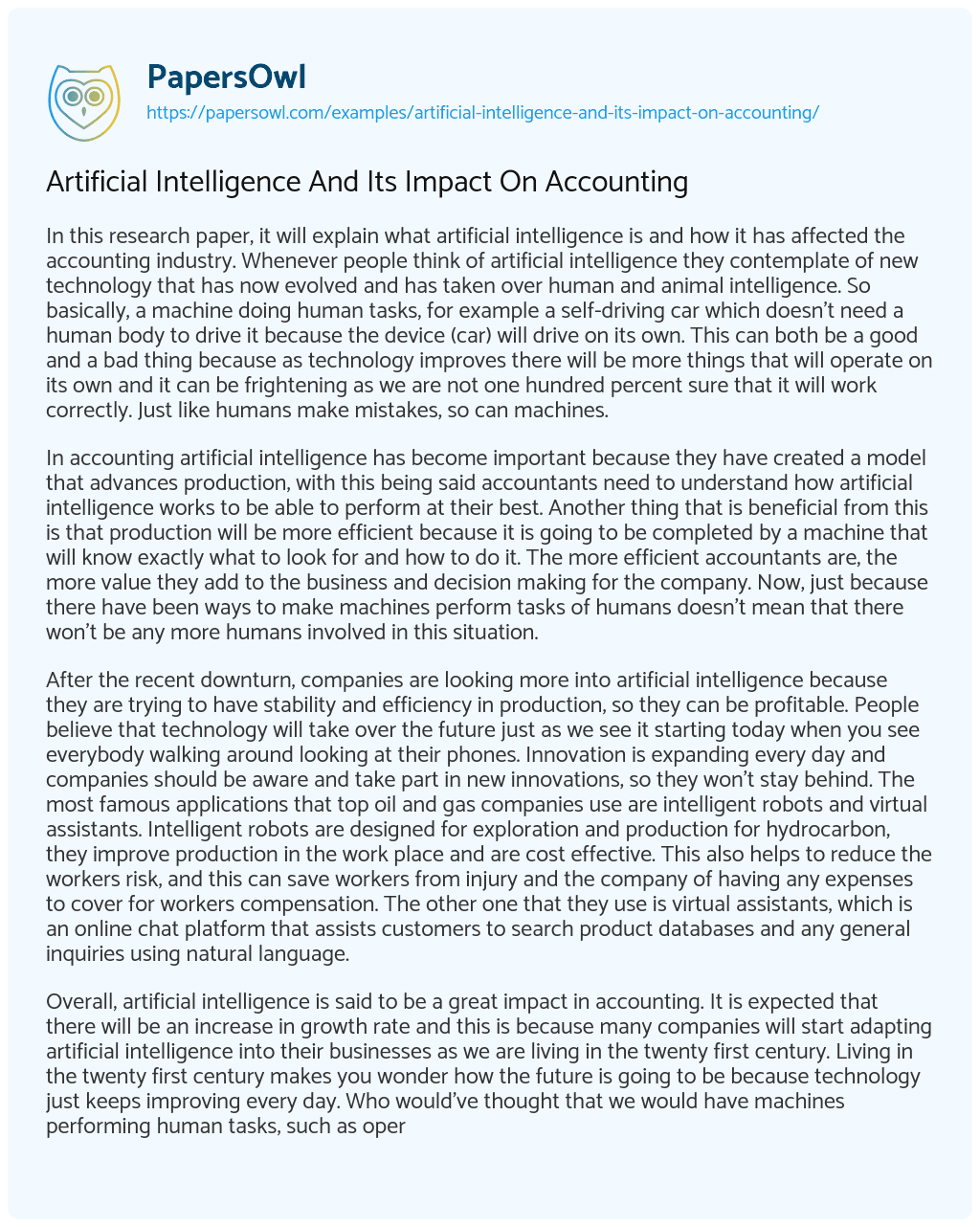 In this research paper, it will explain what artificial intelligence is and how it has affected the accounting industry. Whenever people think of artificial intelligence they contemplate of new technology that has now evolved and has taken over human and animal intelligence. So basically, a machine doing human tasks, for example a self-driving car which doesn’t need a human body to drive it because the device (car) will drive on its own. This can both be a good and a bad thing because as technology improves there will be more things that will operate on its own and it can be frightening as we are not one hundred percent sure that it will work correctly. Just like humans make mistakes, so can machines.

In accounting artificial intelligence has become important because they have created a model that advances production, with this being said accountants need to understand how artificial intelligence works to be able to perform at their best. Another thing that is beneficial from this is that production will be more efficient because it is going to be completed by a machine that will know exactly what to look for and how to do it. The more efficient accountants are, the more value they add to the business and decision making for the company. Now, just because there have been ways to make machines perform tasks of humans doesn’t mean that there won’t be any more humans involved in this situation.

After the recent downturn, companies are looking more into artificial intelligence because they are trying to have stability and efficiency in production, so they can be profitable. People believe that technology will take over the future just as we see it starting today when you see everybody walking around looking at their phones. Innovation is expanding every day and companies should be aware and take part in new innovations, so they won’t stay behind. The most famous applications that top oil and gas companies use are intelligent robots and virtual assistants. Intelligent robots are designed for exploration and production for hydrocarbon, they improve production in the work place and are cost effective. This also helps to reduce the workers risk, and this can save workers from injury and the company of having any expenses to cover for workers compensation. The other one that they use is virtual assistants, which is an online chat platform that assists customers to search product databases and any general inquiries using natural language.

Overall, artificial intelligence is said to be a great impact in accounting. It is expected that there will be an increase in growth rate and this is because many companies will start adapting artificial intelligence into their businesses as we are living in the twenty first century. Living in the twenty first century makes you wonder how the future is going to be because technology just keeps improving every day. Who would’ve thought that we would have machines performing human tasks, such as operating a car without anyone behind the wheel. It is something to think about and it is essential to keep up with new inventions no matter if you are just an employee at a company or is the owner of a company because it affects all of us.

Artificial Intelligence And Its Impact On Accounting. (2019, Jun 14). Retrieved from https://papersowl.com/examples/artificial-intelligence-and-its-impact-on-accounting/