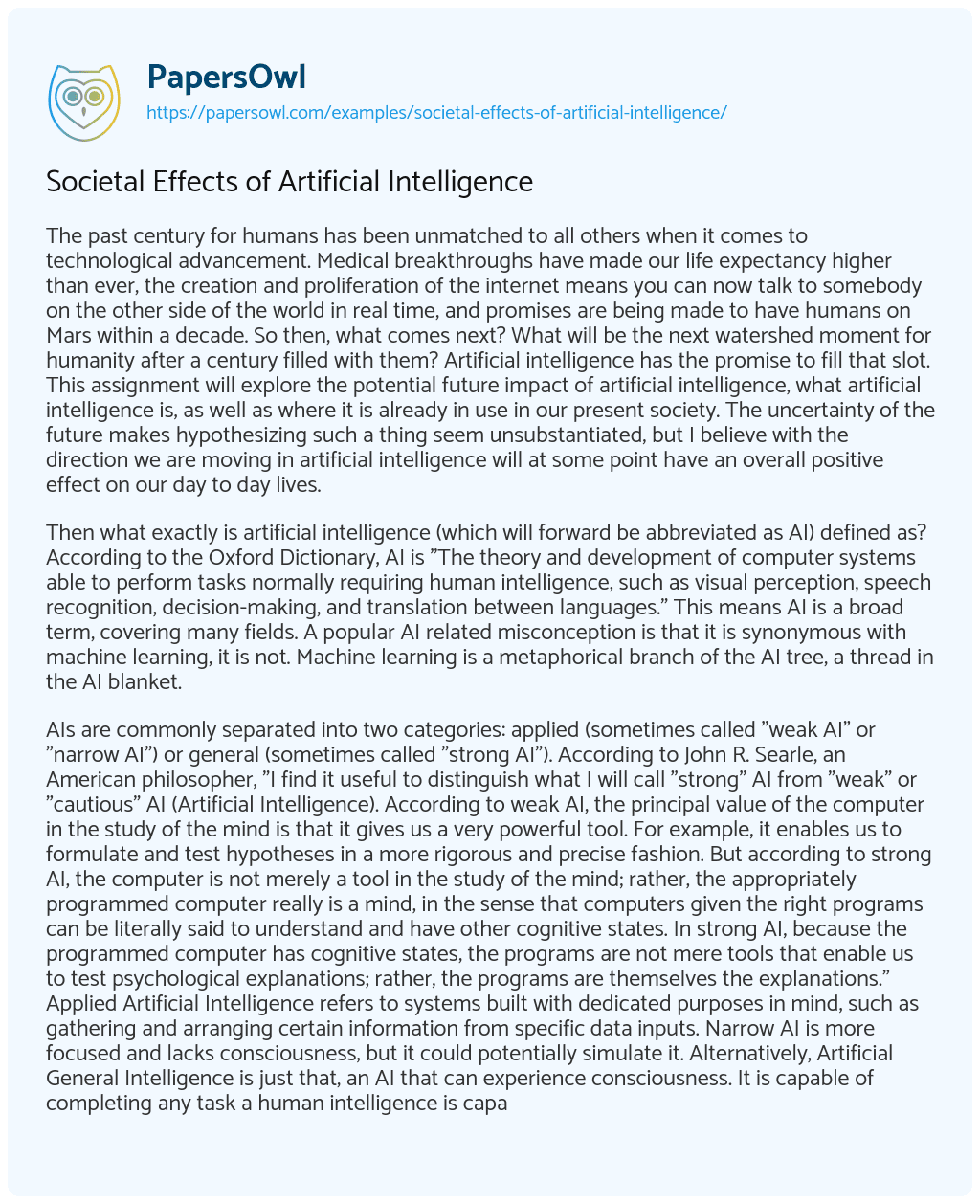 The past century for humans has been unmatched to all others when it comes to technological advancement. Medical breakthroughs have made our life expectancy higher than ever, the creation and proliferation of the internet means you can now talk to somebody on the other side of the world in real time, and promises are being made to have humans on Mars within a decade. So then, what comes next? What will be the next watershed moment for humanity after a century filled with them? Artificial intelligence has the promise to fill that slot. This assignment will explore the potential future impact of artificial intelligence, what artificial intelligence is, as well as where it is already in use in our present society. The uncertainty of the future makes hypothesizing such a thing seem unsubstantiated, but I believe with the direction we are moving in artificial intelligence will at some point have an overall positive effect on our day to day lives.

Then what exactly is artificial intelligence (which will forward be abbreviated as AI) defined as? According to the Oxford Dictionary, AI is “The theory and development of computer systems able to perform tasks normally requiring human intelligence, such as visual perception, speech recognition, decision-making, and translation between languages.” This means AI is a broad term, covering many fields. A popular AI related misconception is that it is synonymous with machine learning, it is not. Machine learning is a metaphorical branch of the AI tree, a thread in the AI blanket.

AIs are commonly separated into two categories: applied (sometimes called “weak AI” or “narrow AI”) or general (sometimes called “strong AI”). According to John R. Searle, an American philosopher, “I find it useful to distinguish what I will call “strong” AI from “weak” or “cautious” AI (Artificial Intelligence). According to weak AI, the principal value of the computer in the study of the mind is that it gives us a very powerful tool. For example, it enables us to formulate and test hypotheses in a more rigorous and precise fashion. But according to strong AI, the computer is not merely a tool in the study of the mind; rather, the appropriately programmed computer really is a mind, in the sense that computers given the right programs can be literally said to understand and have other cognitive states. In strong AI, because the programmed computer has cognitive states, the programs are not mere tools that enable us to test psychological explanations; rather, the programs are themselves the explanations.” Applied Artificial Intelligence refers to systems built with dedicated purposes in mind, such as gathering and arranging certain information from specific data inputs. Narrow AI is more focused and lacks consciousness, but it could potentially simulate it. Alternatively, Artificial General Intelligence is just that, an AI that can experience consciousness. It is capable of completing any task a human intelligence is capable of. Applied AI is a less exciting, more practical use of AI while general AI is elusive in present times and tied more to science fiction than reality. Despite general AI exceeding humanity’s grasp at the moment, there are some places where applied AI has already been successfully integrated into our society.

It is more than likely that most people have already experienced at least one interaction with a narrow AI in their life. Smartphone assistants, such as Amazon’s Alexa, Apple’s Siri, or Google Assistant, are not exactly AI but they are based on the concept. However, the image recognition software in smartphone cameras identifies certain objects (humans, plants, animals) through the aid of an AI. The automotive and energy company Tesla, along with several other companies like Google and Uber, have made tremendous strides over the past decade in the field of self-driving cars. Advancements in machine learning have made this possible. For example, all Tesla vehicles are connected. If a driver using the autonomous mode experiences a navigational anomaly, like an unexpected sharp turn, this is logged and when the system updates this will be included. With the advent of machine learning and AI, facial recognition software has rapidly advanced. This has enabled us to more effectively monitor security surveillance cameras. An AI’s ability to detect facial or object patterns causes the process of searching through hundreds of hours of video camera footage to be a more efficient process than even 10 years ago. While facial recognition software in its current state is not perfect, some such as FaceNet boast a greater than 95% accuracy (99.63% accuracy at its peak) when tested against major facial image databases.