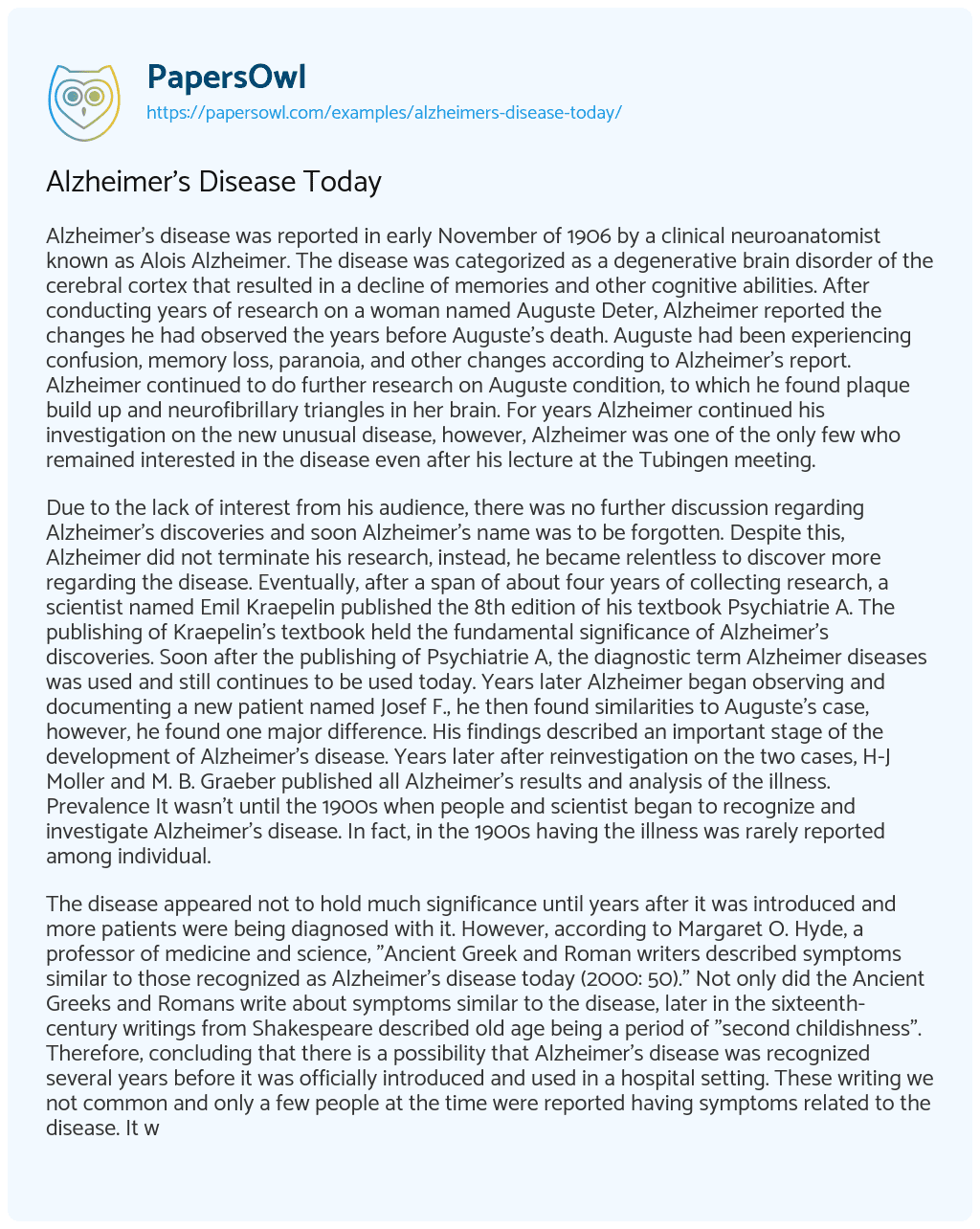 Alzheimer’s disease was reported in early November of 1906 by a clinical neuroanatomist known as Alois Alzheimer. The disease was categorized as a degenerative brain disorder of the cerebral cortex that resulted in a decline of memories and other cognitive abilities. After conducting years of research on a woman named Auguste Deter, Alzheimer reported the changes he had observed the years before Auguste’s death. Auguste had been experiencing confusion, memory loss, paranoia, and other changes according to Alzheimer’s report. Alzheimer continued to do further research on Auguste condition, to which he found plaque build up and neurofibrillary triangles in her brain. For years Alzheimer continued his investigation on the new unusual disease, however, Alzheimer was one of the only few who remained interested in the disease even after his lecture at the Tubingen meeting.

Due to the lack of interest from his audience, there was no further discussion regarding Alzheimer’s discoveries and soon Alzheimer’s name was to be forgotten. Despite this, Alzheimer did not terminate his research, instead, he became relentless to discover more regarding the disease. Eventually, after a span of about four years of collecting research, a scientist named Emil Kraepelin published the 8th edition of his textbook Psychiatrie A. The publishing of Kraepelin’s textbook held the fundamental significance of Alzheimer’s discoveries. Soon after the publishing of Psychiatrie A, the diagnostic term Alzheimer diseases was used and still continues to be used today. Years later Alzheimer began observing and documenting a new patient named Josef F., he then found similarities to Auguste’s case, however, he found one major difference. His findings described an important stage of the development of Alzheimer’s disease. Years later after reinvestigation on the two cases, H-J Moller and M. B. Graeber published all Alzheimer’s results and analysis of the illness. Prevalence It wasn’t until the 1900s when people and scientist began to recognize and investigate Alzheimer’s disease. In fact, in the 1900s having the illness was rarely reported among individual.

The disease appeared not to hold much significance until years after it was introduced and more patients were being diagnosed with it. However, according to Margaret O. Hyde, a professor of medicine and science, “Ancient Greek and Roman writers described symptoms similar to those recognized as Alzheimer’s disease today (2000: 50).” Not only did the Ancient Greeks and Romans write about symptoms similar to the disease, later in the sixteenth-century writings from Shakespeare described old age being a period of “second childishness”. Therefore, concluding that there is a possibility that Alzheimer’s disease was recognized several years before it was officially introduced and used in a hospital setting. These writing we not common and only a few people at the time were reported having symptoms related to the disease. It was not until the 21st century that Alzheimer’s disease became more common, especially in ages 60 and higher. Britannica School, an online website associated with the California State Library states that “an estimated 47.5 million people worldwide were reported living with dementia in 2016 and by 2030 there’s an expected increase of 75.6 million” (2018, February 6). According to this data, people being diagnosed with Alzheimer’s disease will continue to increase in the future to come.

Symptoms Alzheimer’s disease is recognized by three stages, these stages include preclinical, mild cognitive impairment, and Alzheimer’s dementia. In the first stage, known as preclinical, abnormal deposits of proteins occur, as well as the loss of function in neurons in the brain. In this stage no symptoms will be present and diagnostic testing will need to be done in order to enable a diagnosis of the disease. Once a person reaches mild cognitive impairment and the disease continues to progress, symptoms of memory loss, language, and motor skills will become more severe. As the process escalates and more plaque build up a person can experience depression, anxiousness, and instability over the course of time. Eventually, a person will enter the advanced stage of the disease known as Alzheimer’s dementia. Once in this stage, “unresponsiveness and loss of mobility and control of body functions results; then death ensues (Anon. 2018).” Over the course of time, people who suffer from his disease will seem as if they have become a child and then back to an infant. Their memories on how to perform daily actions will denigrate and soon they become unable to perform those daily functions until death results.

Treatment Unfortunately, a cure for Alzheimer’s disease is nonexistent and still on its way to being discovered. Despite ongoing research to find a cure, it may take several years before one will be discovered. After conducting various experiments researchers have found plenty of therapeutic agents that can be used to help slow the process of the disease and treat the symptoms associated with it. For example, acetylcholinesterase inhibitors can be used to slow the progression of the second stage of the disease known as mild cognitive impairment. Other drugs may also be used to treat the symptoms, such as memantine. Memantine works to decrease any abnormal brain activity which can help allow a person to become more engaged in daily activities. Another drug that has been proven to stop or slow the progression of cognitive decline is methylthioninium chloride. Methylthioninium chloride targets and dissolves the protein fibers that form neurofibrillary triangles in the brain. Currently, researchers are conducting additional research on vaccines, anti-cholesterol statin drugs, as well as anti-inflammatory medications to help prevent or slow the process of the disease (e.g., Mader and Windelspecht 2018). Prognosis As people grow older their body, as well as their mental state, will continue to decline every year that passes.

This means that the older a person gets, the higher their likelihood to get the disease becomes. Not only is age a factor to getting Alzheimer’s disease, but there are also plenty of other factors that can put a person more at risk. Some factors include lack of physical activity, poor diet habits, and experiencing high levels of stress. Other contributors are a person’s genes. If the disease runs in a person’s family then they may be more likely to have the disease in the future. Furthermore, other health problems like poor cardiovascular health, having high levels of homocysteine, diabetes, high cholesterol, and other health complications can make a person more prone to get the disease. Even a specific type of injury can increase a person’s risk, for instance, a concussion can later influence the onset of the disease. “Scientist have also studied how toxic chemicals, problems with bodily systems that turn food into energy, and the shapes and actions of nerve cells have all possibly posed a risk to getting the disease (Hyde and Setaro 2000).” There is a countless number of factors that can contribute to the likelihood of getting the disease. In fact, many people are unaware of the many contributors and as a result, may be putting themselves at risk.

Current Research With still so many unanswered questions regarding Alzheimer’s disease, researcher’s continue to conduct new never heard of experiment’s. Some that may even change how the world views, treats, and diagnosis the disease. One of today’s newest researchers has discovered that MRIs can be used to help predict Alzheimer’s disease. According to the report done by the Radiological Society of North America, MRIs can perform better at identifying Alzheimer’s disease than the common clinical test. The common clinical tends to fail to identify many people with the disease, and in the end, those who are not identified will continue to go on with the disease. In this study, diffusion tensor imaging is used to assess the condition of the white matter in the brain. By doing this scientist are able to see the movement of water molecules and white matter tracts. Being able to see the water molecule movement in the white matter helps to distinguish if there is any damage. This was used to compare water molecule movement in people with and without the disease. By using this type of testing scientist “achieved 89 percent accuracy in predicting who would go onto developing Alzheimer disease (Anon. 2018). Unfortunately, this technique will not be used in the hospital setting until further research is conducted, but once in use will help treat patients with Alzheimer’s disease sooner. Another new groundbreaking report on Alzheimer’s disease has identified a new possible treatment. This treatment includes gene recombination in neuron’s in the brain, targeting the specific gene APP that is linked to Alzheimer’s disease. In this experiment “the process required reverse transcription and reinsertion of the variants back into the original genome, producing permanent DNA sequence changes within the cell’s DNA blueprint (Anon. 2018)”. Since recombination is considered normal for the brain but is also identified as what goes wrong in Alzheimer’s disease, then using gene recombination can help stop the rise of amyloid plaques in the brain. These new finding can change how the world understands and treats Alzheimer’s disease.