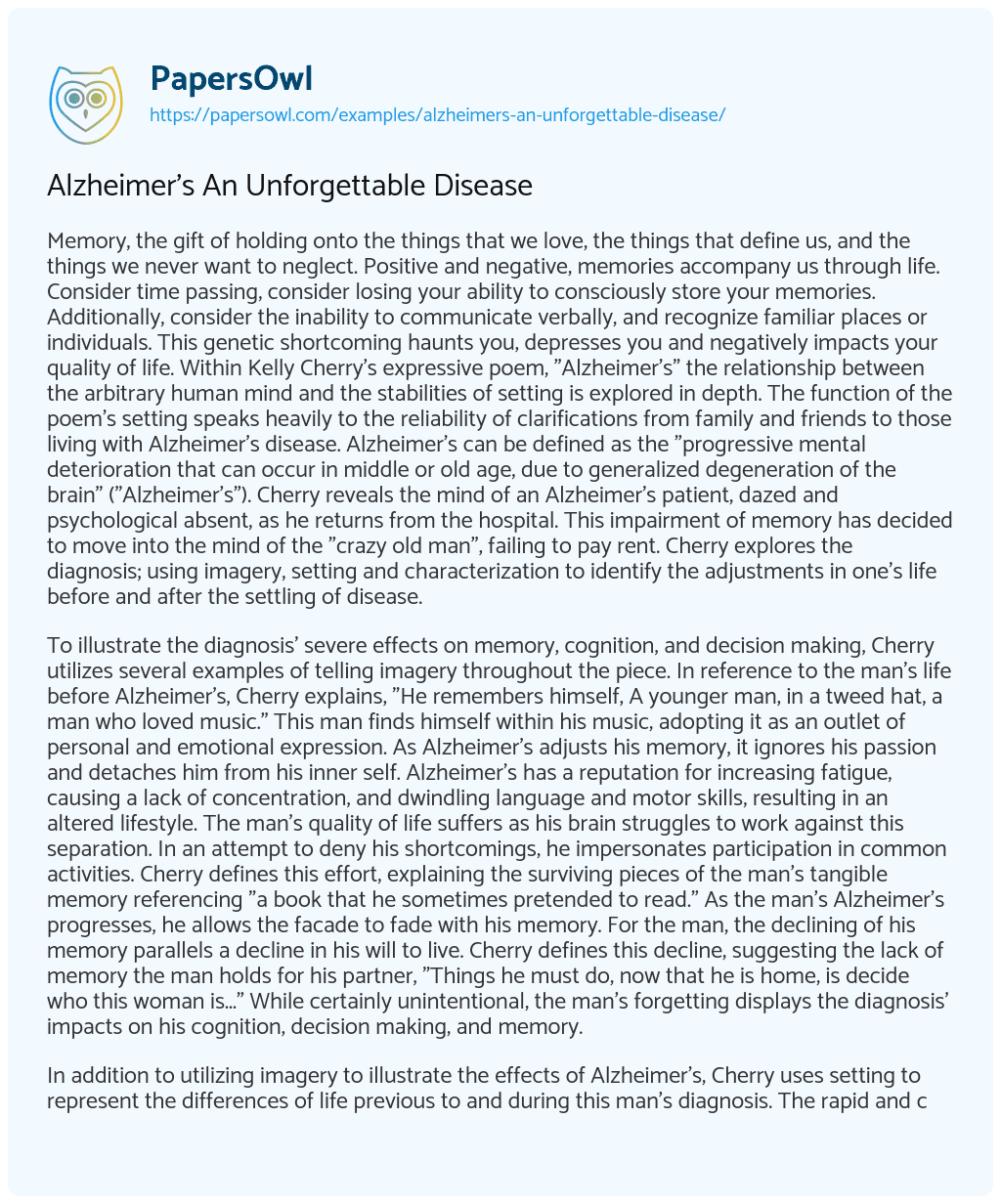 Memory, the gift of holding onto the things that we love, the things that define us, and the things we never want to neglect. Positive and negative, memories accompany us through life. Consider time passing, consider losing your ability to consciously store your memories. Additionally, consider the inability to communicate verbally, and recognize familiar places or individuals. This genetic shortcoming haunts you, depresses you and negatively impacts your quality of life. Within Kelly Cherry’s expressive poem, “Alzheimer’s” the relationship between the arbitrary human mind and the stabilities of setting is explored in depth. The function of the poem’s setting speaks heavily to the reliability of clarifications from family and friends to those living with Alzheimer’s disease. Alzheimer’s can be defined as the “progressive mental deterioration that can occur in middle or old age, due to generalized degeneration of the brain” (“Alzheimer’s”). Cherry reveals the mind of an Alzheimer’s patient, dazed and psychological absent, as he returns from the hospital. This impairment of memory has decided to move into the mind of the “crazy old man”, failing to pay rent. Cherry explores the diagnosis; using imagery, setting and characterization to identify the adjustments in one’s life before and after the settling of disease.

To illustrate the diagnosis’ severe effects on memory, cognition, and decision making, Cherry utilizes several examples of telling imagery throughout the piece. In reference to the man’s life before Alzheimer’s, Cherry explains, “He remembers himself, A younger man, in a tweed hat, a man who loved music.” This man finds himself within his music, adopting it as an outlet of personal and emotional expression. As Alzheimer’s adjusts his memory, it ignores his passion and detaches him from his inner self. Alzheimer’s has a reputation for increasing fatigue, causing a lack of concentration, and dwindling language and motor skills, resulting in an altered lifestyle. The man’s quality of life suffers as his brain struggles to work against this separation. In an attempt to deny his shortcomings, he impersonates participation in common activities. Cherry defines this effort, explaining the surviving pieces of the man’s tangible memory referencing “a book that he sometimes pretended to read.” As the man’s Alzheimer’s progresses, he allows the facade to fade with his memory. For the man, the declining of his memory parallels a decline in his will to live. Cherry defines this decline, suggesting the lack of memory the man holds for his partner, “Things he must do, now that he is home, is decide who this woman is…” While certainly unintentional, the man’s forgetting displays the diagnosis’ impacts on his cognition, decision making, and memory.

In addition to utilizing imagery to illustrate the effects of Alzheimer’s, Cherry uses setting to represent the differences of life previous to and during this man’s diagnosis. The rapid and chaotic nature of the poem mirrors the man’s feeling towards his house. The house represents the man’s past, the memories that have failed him as well as the few details he holds closely. He fails to acknowledge the amount he has lost, standing in a doorway that he used to know. Cherry guides the man into his home explaining, “This is his house. He remembers it as his.” Words nudge the man to recognize himself, bringing the house to life with memories of his past. Although he cannot identify definite memories, the man recovers elements of himself within the framework of the brick walls. He is able to place himself within his home as he, “remembers the walkway he built between the front room and the garage, the rhododendron he planted in back, the car he used to drive.” Returning to the structure in which he spent the majority of his adult life juxtaposes the man’s fear of fading time, while he relies on the stability of home. As the house can provide the man shelter from outside confusion, distress begins to seep through the “white wood trim.” Overwhelmed, the man’s mind is flooded with a collection of aimless details. Despite his recollection of his tweed hat, his green thumb and his ear for music, the man cannot recognize the “white-haired woman, standing here in the doorway, welcoming him in” as his wife.

While Cherry represents the man’s declining memory, cognitive ability, and quality of life through setting, characterization is applied to clarify the effects and probability of Alzheimer’s. The contrast of before and after characterizes the ravages of an Alzheimer’s diagnosis. The man is confronted with a dwindling sense of respect, for himself and from others. Prior to his diagnosis, he was identified as, “a younger man…a man who loved music.” He is currently described as, “a crazy old man, back from the hospital, his mind rattling.” This transition embodies the effects of Alzheimer’s on the man’s psychological ability, along with his weakening physical demeanor. Cherry additionally illustrates the use of characterization while dismissing the idea of naming his subjects; presenting them as “the man” and “the woman.” This open-ended depiction suggests that any man or woman is susceptible to Alzheimer’s. Cherry’s decision renders the characters more relatable to the reader, providing them the opportunity to substitute the nameless with a diagnosed parent, grandparent, or friend. This passionate and personalized connection challenges the priorities of its readers.

We must consider the gift of memory, additionally recognizing those memories which define us. How would a life-altering diagnosis redefine our quality of life? Ultimately, Kelly Cherry’s “Alzheimer’s”, utilizes forms of imagery, depictions of particular settings, and the characterization of the nameless to acknowledge the contrast of one’s life before and after Alzheimer’s. Explaining one’s change of values following such a diagnosis, Cherry clarifies, “Other things have become more urgent. Other matters are now of greater import, have more consequence.” Alzheimer’s pushes individuals to reconsider their obligations and priorities, Cherry advises readers to consider life for what it is, creating memories that we want to accompany us throughout life.