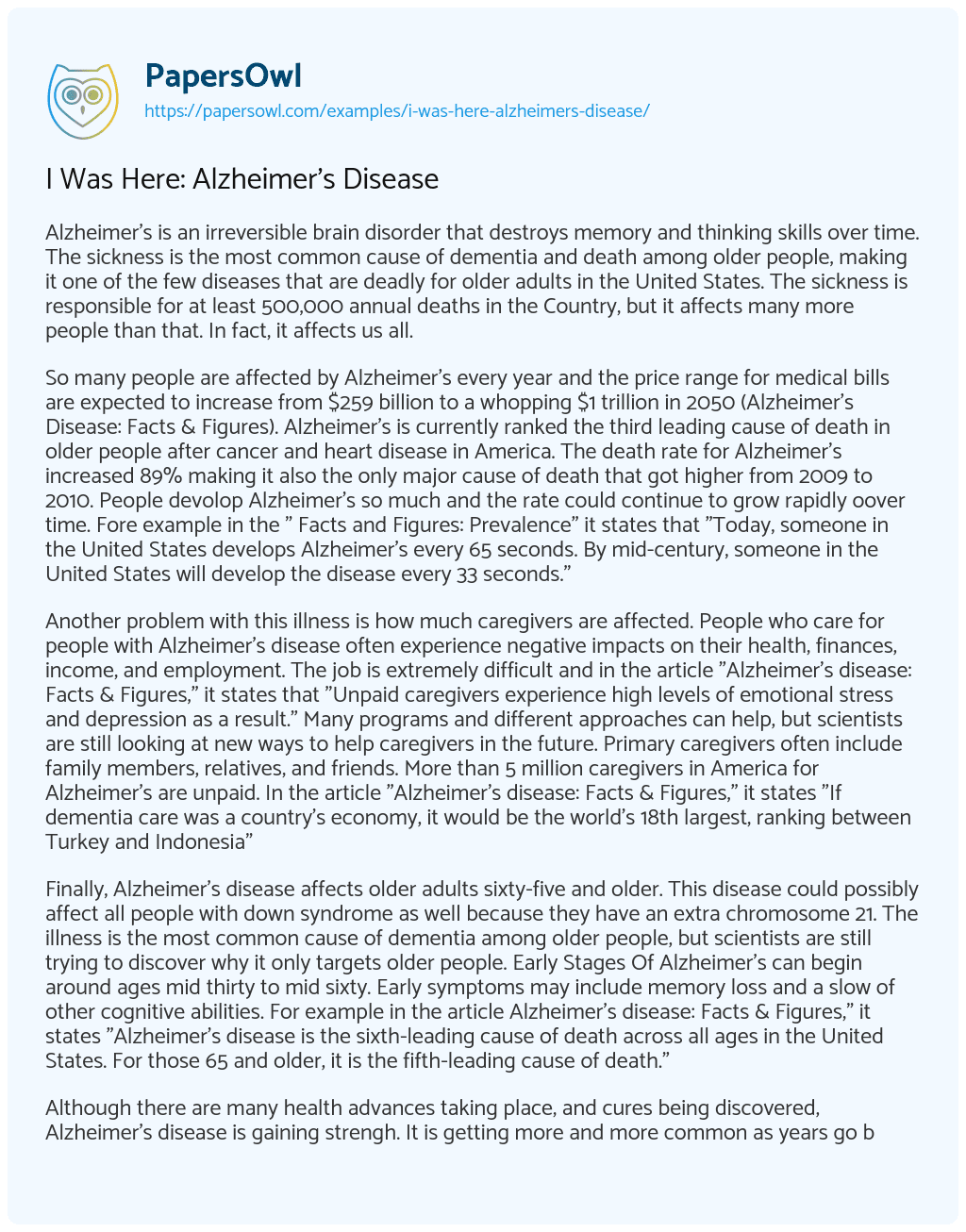 Alzheimer’s is an irreversible brain disorder that destroys memory and thinking skills over time. The sickness is the most common cause of dementia and death among older people, making it one of the few diseases that are deadly for older adults in the United States. The sickness is responsible for at least 500,000 annual deaths in the Country, but it affects many more people than that. In fact, it affects us all.

So many people are affected by Alzheimer’s every year and the price range for medical bills are expected to increase from $259 billion to a whopping $1 trillion in 2050 (Alzheimer’s Disease: Facts & Figures). Alzheimer’s is currently ranked the third leading cause of death in older people after cancer and heart disease in America. The death rate for Alzheimer’s increased 89% making it also the only major cause of death that got higher from 2009 to 2010. People devolop Alzheimer’s so much and the rate could continue to grow rapidly oover time. Fore example in the ” Facts and Figures: Prevalence” it states that “Today, someone in the United States develops Alzheimer’s every 65 seconds. By mid-century, someone in the United States will develop the disease every 33 seconds.”

Another problem with this illness is how much caregivers are affected. People who care for people with Alzheimer’s disease often experience negative impacts on their health, finances, income, and employment. The job is extremely difficult and in the article “Alzheimer’s disease: Facts & Figures,” it states that “Unpaid caregivers experience high levels of emotional stress and depression as a result.” Many programs and different approaches can help, but scientists are still looking at new ways to help caregivers in the future. Primary caregivers often include family members, relatives, and friends. More than 5 million caregivers in America for Alzheimer’s are unpaid. In the article “Alzheimer’s disease: Facts & Figures,” it states “If dementia care was a country’s economy, it would be the world’s 18th largest, ranking between Turkey and Indonesia”

Finally, Alzheimer’s disease affects older adults sixty-five and older. This disease could possibly affect all people with down syndrome as well because they have an extra chromosome 21. The illness is the most common cause of dementia among older people, but scientists are still trying to discover why it only targets older people. Early Stages Of Alzheimer’s can begin around ages mid thirty to mid sixty. Early symptoms may include memory loss and a slow of other cognitive abilities. For example in the article Alzheimer’s disease: Facts & Figures,” it states “Alzheimer’s disease is the sixth-leading cause of death across all ages in the United States. For those 65 and older, it is the fifth-leading cause of death.”

Although there are many health advances taking place, and cures being discovered, Alzheimer’s disease is gaining strengh. It is getting more and more common as years go by, and scientists are still working hard to find a cure and ways to prevent it. It is such a deadly disease that even the caregivers of patients with Alzheimer’s are suffering. Hopefully in the future we will find a cure and never need to worry about getting it as time passes, or losing family members and friends

I Was Here: Alzheimer's Disease. (2019, Oct 01). Retrieved from https://papersowl.com/examples/i-was-here-alzheimers-disease/

Alzheimer’s Disease is a Growing Problem

A Research Paper on Alzheimer’s Disease