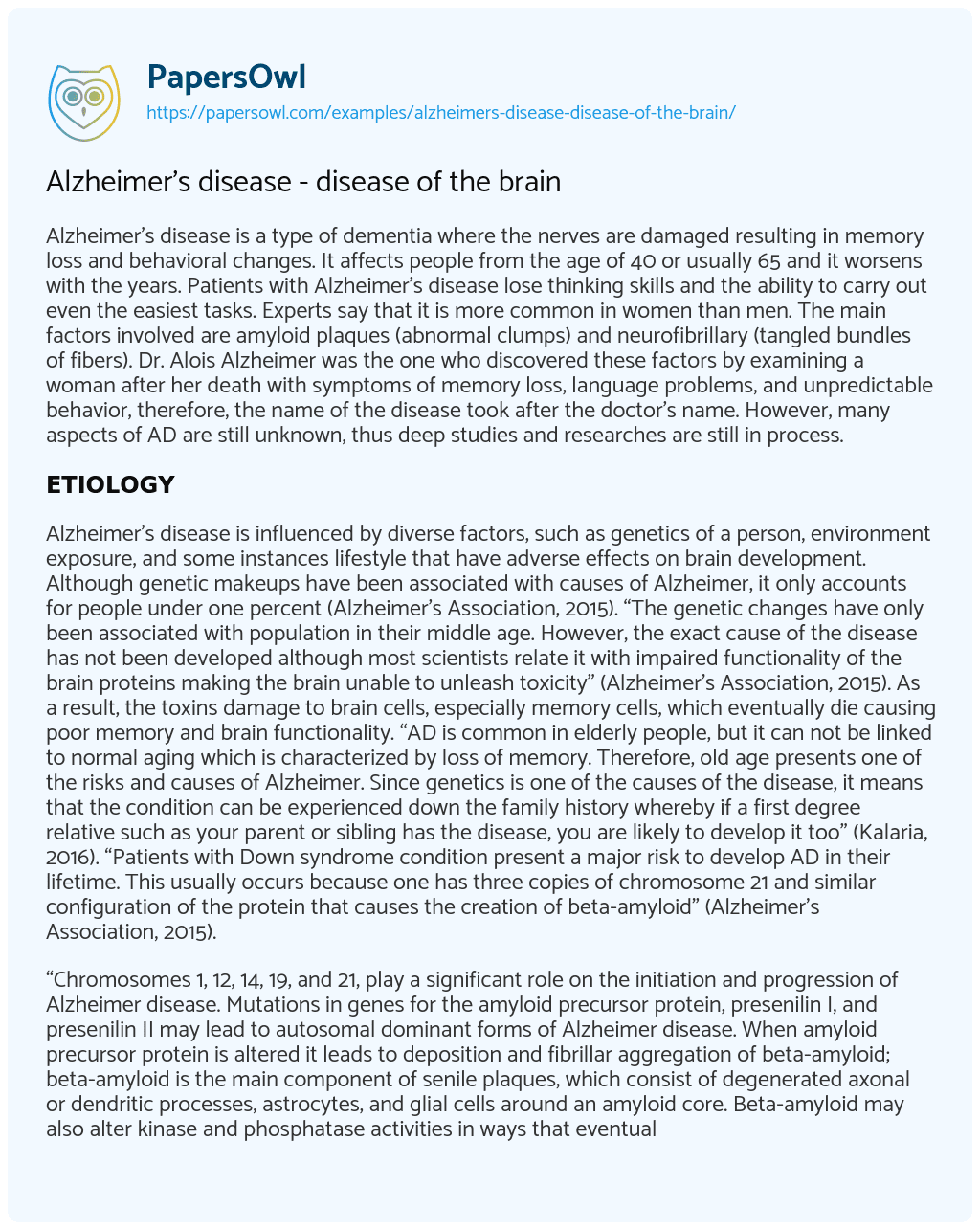 Alzheimer’s disease is a type of dementia where the nerves are damaged resulting in memory loss and behavioral changes. It affects people from the age of 40 or usually 65 and it worsens with the years. Patients with Alzheimer’s disease lose thinking skills and the ability to carry out even the easiest tasks. Experts say that it is more common in women than men. The main factors involved are amyloid plaques (abnormal clumps) and neurofibrillary (tangled bundles of fibers). Dr. Alois Alzheimer was the one who discovered these factors by examining a woman after her death with symptoms of memory loss, language problems, and unpredictable behavior, therefore, the name of the disease took after the doctor’s name. However, many aspects of AD are still unknown, thus deep studies and researches are still in process.

Alzheimer’s disease is influenced by diverse factors, such as genetics of a person, environment exposure, and some instances lifestyle that have adverse effects on brain development. Although genetic makeups have been associated with causes of Alzheimer, it only accounts for people under one percent (Alzheimer’s Association, 2015). “The genetic changes have only been associated with population in their middle age. However, the exact cause of the disease has not been developed although most scientists relate it with impaired functionality of the brain proteins making the brain unable to unleash toxicity” (Alzheimer’s Association, 2015). As a result, the toxins damage to brain cells, especially memory cells, which eventually die causing poor memory and brain functionality. “AD is common in elderly people, but it can not be linked to normal aging which is characterized by loss of memory. Therefore, old age presents one of the risks and causes of Alzheimer. Since genetics is one of the causes of the disease, it means that the condition can be experienced down the family history whereby if a first degree relative such as your parent or sibling has the disease, you are likely to develop it too” (Kalaria, 2016). “Patients with Down syndrome condition present a major risk to develop AD in their lifetime. This usually occurs because one has three copies of chromosome 21 and similar configuration of the protein that causes the creation of beta-amyloid” (Alzheimer’s Association, 2015).

“Chromosomes 1, 12, 14, 19, and 21, play a significant role on the initiation and progression of Alzheimer disease. Mutations in genes for the amyloid precursor protein, presenilin I, and presenilin II may lead to autosomal dominant forms of Alzheimer disease. When amyloid precursor protein is altered it leads to deposition and fibrillar aggregation of beta-amyloid; beta-amyloid is the main component of senile plaques, which consist of degenerated axonal or dendritic processes, astrocytes, and glial cells around an amyloid core. Beta-amyloid may also alter kinase and phosphatase activities in ways that eventually lead to hyperphosphorylation of tau and formation of neurofibrillary tangles. Other genetic determinants include the apolipoprotein (apo) E alleles (?). Apo E proteins influence beta-amyloid deposition, cytoskeletal integrity, and efficiency of neuronal repair. Risk of Alzheimer disease is substantially increased in people with 2 ?4 alleles and may be decreased in those who have the ?2 allele. The influence of other factors in causing AD is under study (Huang, 2018).

Memory problems are typically the first signs of cognitive impairment related to Alzheimer’s disease, but they can vary from person to person. There are three stages were the disease worsens gradually. First, mild Alzheimer’s disease. It consists in short-term memory and behavior changes. They include patients asking repetitive questions, frequently misplacing objects or being unable to remember appointments. Second, moderate Alzheimer’s disease. At this stage people present poor reasoning, struggle handling complex tasks, and reduced judgment, such as being unable to manage bank account or making poor financial decisions. Also, hallucinations, visuospatial disfunctions (e.g. failure to recognize faces or common objects), and language disfunctions such as difficulty thinking of common words, and errors when speaking or writing are very frequent. Third, severe Alzheimer’s disease. The brain shrinks considerably due to plaques and tangles which spread throughout the brain. This prevent patients to do any physical activity and to communicate. Patients are completely dependent on others and one may be in bed most of the time (NIH, 2017).

Considering that Alzheimer’s disease is a type of dementia it is required a careful analysis to distinguish it by using different methods and tools. The diagnosis consists in physical examination, evaluation of patient’s family history and the point of view of family members concerning the patient’s behaviors. Also, the diagnosis implies formal mental status examination, where the patient comes assessed on mood and affect, speech and thought process. Laboratory testing, analysis of cerebrospinal fluid (CSF), positron emission tomography (PET) and neuroimaging present 85% of the criteria used in confirming the disease. If CSF analysis reveals a low level of beta-amyloid and if PET scans show amyloid deposits in the brain, the diagnosis is more likely to be Alzheimer disease. However, the confirmation of AD is possible only after a patient death by removing a sample of the brain tissue and being examined under a microscope.

Unfortunately, there is no treatment for AD, but the diagnosis in an early stage helps to slow down the progress of the disease. A drug that seems to delay the advancement of AD is Memantine. It treats moderate to severe forms of AD. Memantine adjusts an important brain chemical which if in excessive amounts causes brain cell death. However, many others are in the studying process, but none of them appear to be effective. Patients with AD may present decreased levels of neurotransmitters acetylcholine in the brain, thus drugs such as donepezil, galantamine, and rivastigmine are used to temporarily improve mental function, including memory, but they do not slow the progression of the disease. Approaches in the treatment of AD besides drugs include a safe environment. The environment should be bright, cheerful, safe, stable, and designed to help with orientation. Some stimulation, such as a radio or television, is helpful, but excessive stimulation should be avoided (Huang, 2018).

Patient with AD tend to be anxious and upset thus, it is frequent that they start yelling, throw things, or attempt to hit others, therefore, it is important to keep their surroundings quiet. New things in their lives such as traveling, new gusets, or any changes make them nervous, thus it is preferable to develop a routine in order to keep them calm. Certain situations such as the need to use the bathroom, also can cause an outburst in AD patients. When the disease grows more severe patients have bladder and bowels issues. To prevent these problems the care giver should take she or he every few hours to the restroom and be aware of the signs of needing to go. Depression is another factor in AD people. Drugs, performing regular exercises, and staying close to the beloved ones would improve their phycological state. AD patients are inclined to lose their balance. Physical activity would help to strengthen the muscles and prevent them to fall. Objects that may cause them to trip over, such as rugs, or extension cords should be removed. Many patients with AD die of other problems, including bladder infection, flu and pneumonia. To avoid this, patients should visit their doctor more often and get flu shots. Sleep problems and wandering present as well a burden. Patients should avoid sleeping during the day and never be let home alone by themselves (Smith, 2013).

The preclinical stage of Alzheimer’s disease is unremarkable and there are almost no reliable and valid symptoms and signs which would allow an early diagnosis before the manifestation of permanent deficits. To detect AD, cognitive impairment has to be severe enough to compromise the activities of daily living. In the mild dementia stage, forgetting things are usually prominent and apparition of depressive symptoms are frequent, but the patient usually manages to live alone. Supervision is needed in the moderate dementia stage, when other mental domains are affected in a more obvious manner and non-cognitive disturbances of thought, perception, affect, and behavior put increasing stress on the caregivers. Complete dependence of the patients, who frequently develop neurological disturbances, is typical of the late stage of illness. The life expectancy of patients with a clinical diagnosis of Alzheimer’s disease is significantly reduced. On average, people with Alzheimer’s disease live between three and 11 years after diagnosis, but some survive 20 years or more. It depends on age, gender, and level of disability (NIH, 2017).

2. National Institute on Aging. (2018, April 01). How is Alzheimer’s disease treated?. Retrieved from https://www.nia.nih.gov/health/how-alzheimers-disease-treated

[bookmark: _Hlk534569945]4. Huang, J. (2018, March). Alzheimer Disease: Alzheimer disease is a progressive loss of mental function, characterized by degeneration of brain tissue, including loss of nerve cells, the accumulation of an abnormal protein called beta-amyloid, and the development of neurofibrillary tangles. Retrieved from https://www.merckmanuals.com/home/brain,-spinal-cord,-and-nerve-disorders/delirium-and-dementia/alzheimer-disease

Alzheimer’s disease - disease of the brain. (2019, Jan 01). Retrieved from https://papersowl.com/examples/alzheimers-disease-disease-of-the-brain/