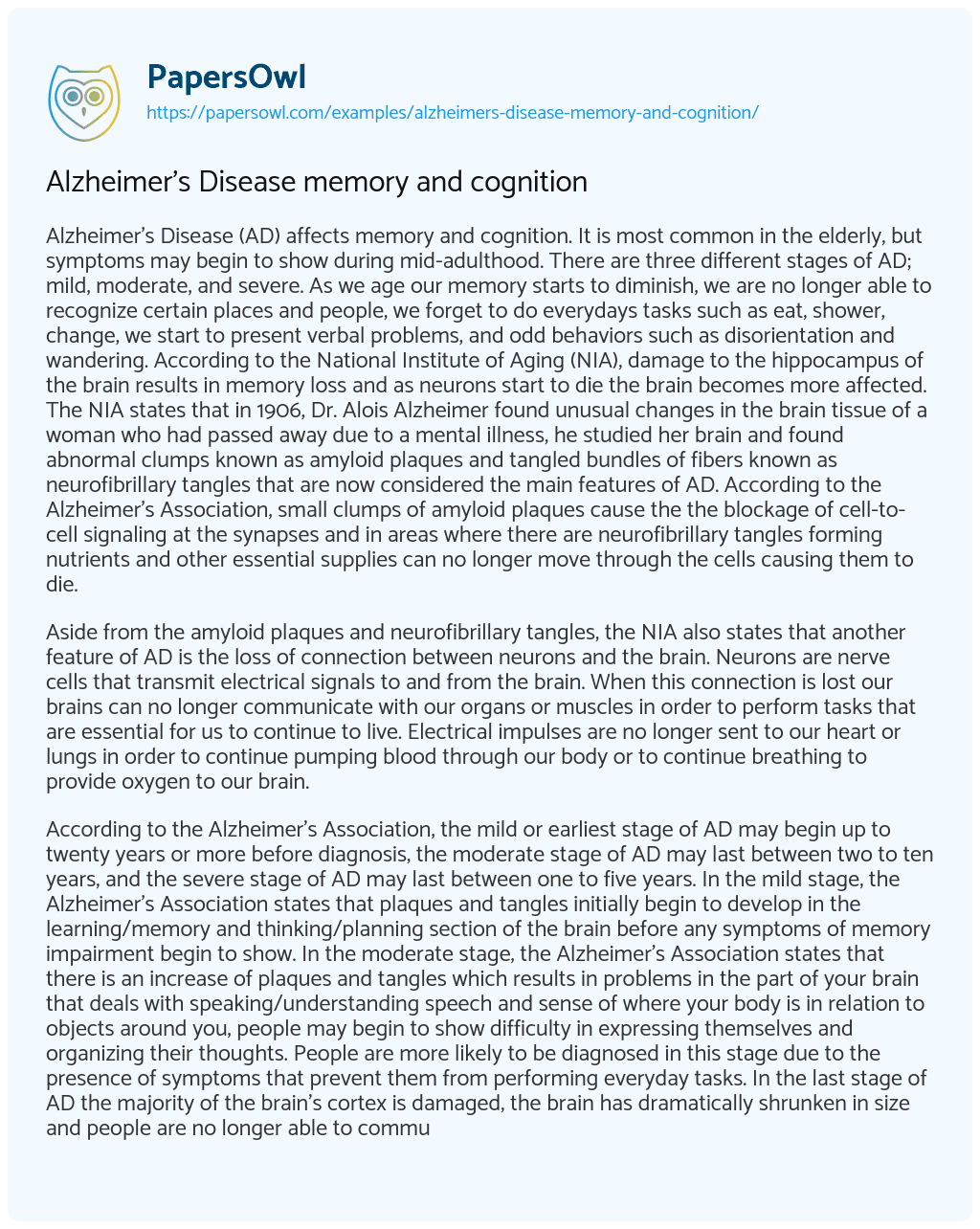 Alzheimer’s Disease (AD) affects memory and cognition. It is most common in the elderly, but symptoms may begin to show during mid-adulthood. There are three different stages of AD; mild, moderate, and severe. As we age our memory starts to diminish, we are no longer able to recognize certain places and people, we forget to do everydays tasks such as eat, shower, change, we start to present verbal problems, and odd behaviors such as disorientation and wandering. According to the National Institute of Aging (NIA), damage to the hippocampus of the brain results in memory loss and as neurons start to die the brain becomes more affected. The NIA states that in 1906, Dr. Alois Alzheimer found unusual changes in the brain tissue of a woman who had passed away due to a mental illness, he studied her brain and found abnormal clumps known as amyloid plaques and tangled bundles of fibers known as neurofibrillary tangles that are now considered the main features of AD. According to the Alzheimer’s Association, small clumps of amyloid plaques cause the the blockage of cell-to-cell signaling at the synapses and in areas where there are neurofibrillary tangles forming nutrients and other essential supplies can no longer move through the cells causing them to die.

Aside from the amyloid plaques and neurofibrillary tangles, the NIA also states that another feature of AD is the loss of connection between neurons and the brain. Neurons are nerve cells that transmit electrical signals to and from the brain. When this connection is lost our brains can no longer communicate with our organs or muscles in order to perform tasks that are essential for us to continue to live. Electrical impulses are no longer sent to our heart or lungs in order to continue pumping blood through our body or to continue breathing to provide oxygen to our brain.

According to the Alzheimer’s Association, the mild or earliest stage of AD may begin up to twenty years or more before diagnosis, the moderate stage of AD may last between two to ten years, and the severe stage of AD may last between one to five years. In the mild stage, the Alzheimer’s Association states that plaques and tangles initially begin to develop in the learning/memory and thinking/planning section of the brain before any symptoms of memory impairment begin to show. In the moderate stage, the Alzheimer’s Association states that there is an increase of plaques and tangles which results in problems in the part of your brain that deals with speaking/understanding speech and sense of where your body is in relation to objects around you, people may begin to show difficulty in expressing themselves and organizing their thoughts. People are more likely to be diagnosed in this stage due to the presence of symptoms that prevent them from performing everyday tasks. In the last stage of AD the majority of the brain’s cortex is damaged, the brain has dramatically shrunken in size and people are no longer able to communicate, recognize others, or care for themselves (Alzheimer’s Association, 2018).

When it comes to race and gender, AD does not discriminate, however we have seen a more prevalent increase of the disease in women and African Americans more than any other race; two thirds of people with AD are women, African Americans are twice as likely to develop AD or other dementias as older whites, hispanics are one and one-half times more likely to develop AD or other dementias as older whites (Alzheimer’s Association, 2018). According to the NIA, 5.5 million Americans age 65 or older may suffer with AD today. AD is on the rise and has become number 6 in the leading cause of death in the United States according the Alzheimer’s Association. Those at risk of developing AD are mid to low income families, people who are obese/overweight, alcohol consumers, people with hypertension, diabetes, and cardiovascular disease (Qiu, Chengxuan et al 2009).

Alzheimer’s disease is becoming more common as the years go by, yet it is one of the diseases that receives minimal federal funding for research. According to Insurance Business Weekly, “the National Institute for Health (NIH) spent $504 million for Alzheimer’s Disease, while $5.2 billion went to cancer research; $2.9 billion for HIV/AIDS; $2 billion for cardiovascular disease; $1.2 billion for heart disease; and more than $1billion for diabetes.” The less money spent on research for AD the more the disease will continue to increase in the nation and more money will have to go to medical expenses. According to the Alzheimer’s Association, the total cost of expenses to care for people with AD today is estimated to be $277 billion and by 2050 it will increase more than $1.1trillion if something is not done to prevent the disease. Charles J. Fuschillo from the Alzheimer’s Foundation of America (AFA) states , “Without the same investment in combating dementia, costs will continue to rise at unprecedented rates and promising research will remain unfunded, slowing scientific progress and putting Americans at risk for this terminal disease” (Insurance Business Weekly). People do not realize the magnitude of this disease and how it can negatively impact us in the future if we do not support our scientists and provide them with the funds to further their research which could lead to new medical advances in order to prevent the development of AD.

New Treatments that scientists have been studying/testing and believe can stop the development of AD include; Disease Modifying Therapies (DMTs) which are designed to reduce existing brain amyloid levels or to decrease its production, Passive Immunotherapies that are intravenously injected antibody solutions designed to target and remove beta amyloid from the blood and/or brain, BACE inhibitors inhibit the activity on an enzyme called beta amyloid cleaving enzyme designed to reduce the production of beta amyloid in the spinal fluid and brain, and non medical treatments like Light Therapy, Transcranial Direct Neural Stimulation, Acupuncture and Electro-acupuncture, etc (Ellison, James M). According to Insurance Business Weekly, early detection of AD through memory screenings can result in individuals receiving therapy earlier when most available treatments for the disease are most helpful.

Alzheimer’s Disease is a mental disease on the rise. It can impact us tremendously in the next thirty years if we do not make it a priority to further invest in research and find a solution to stop its development. The earlier we are able to detect changes in brain activity and symptoms the less at risk we will be to develop it ourselves. We should not put it off or ignore the disease just because it mainly affects the elderly. It should be prioritized the same way other diseases like diabetes and cardiovascular diseases are. We need to fight for more investment and research of AD because it is a mental disease that not only affects the individual but also their loved ones.