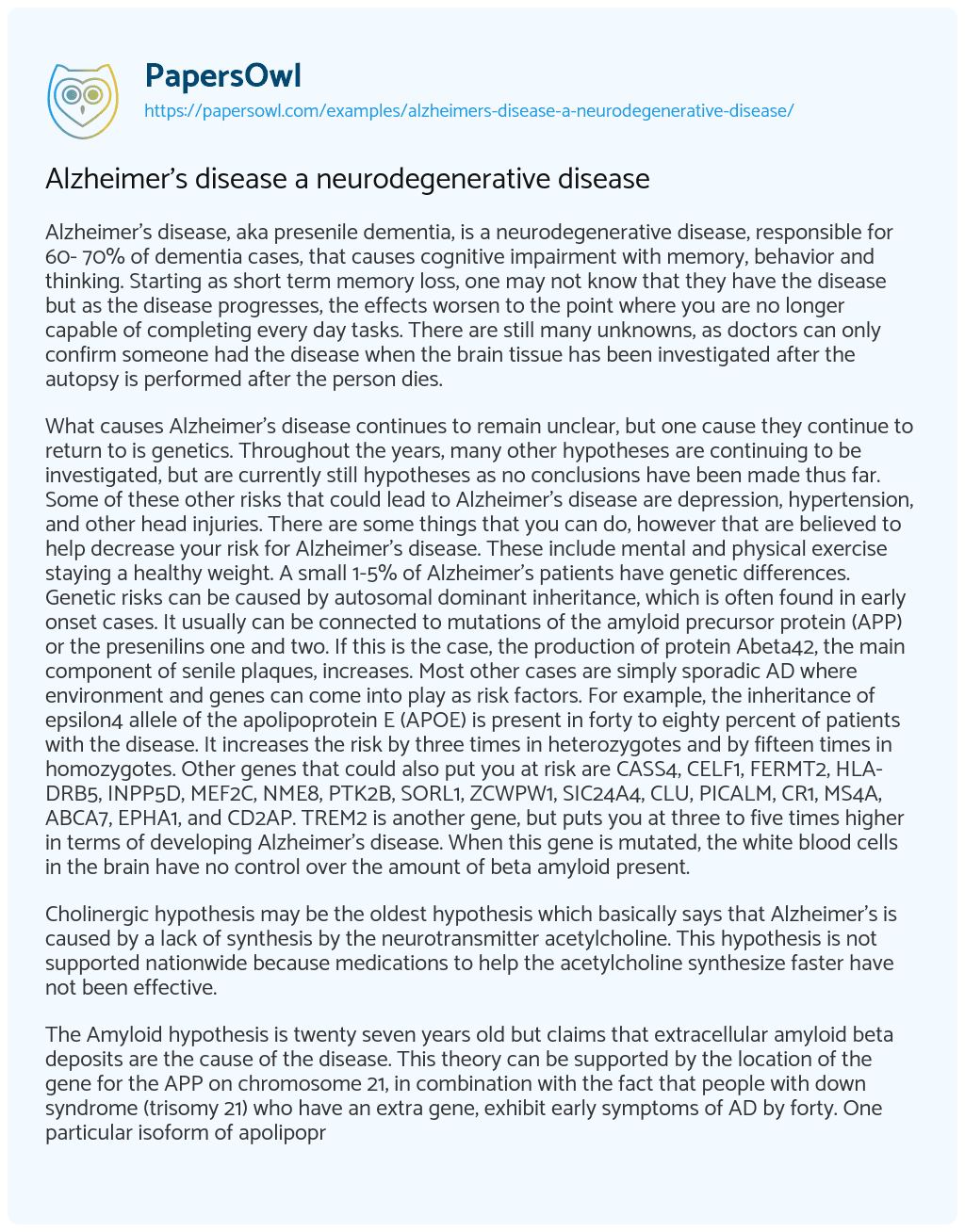 Alzheimer’s disease, aka presenile dementia, is a neurodegenerative disease, responsible for 60- 70% of dementia cases, that causes cognitive impairment with memory, behavior and thinking. Starting as short term memory loss, one may not know that they have the disease but as the disease progresses, the effects worsen to the point where you are no longer capable of completing every day tasks. There are still many unknowns, as doctors can only confirm someone had the disease when the brain tissue has been investigated after the autopsy is performed after the person dies.

What causes Alzheimer’s disease continues to remain unclear, but one cause they continue to return to is genetics. Throughout the years, many other hypotheses are continuing to be investigated, but are currently still hypotheses as no conclusions have been made thus far. Some of these other risks that could lead to Alzheimer’s disease are depression, hypertension, and other head injuries. There are some things that you can do, however that are believed to help decrease your risk for Alzheimer’s disease. These include mental and physical exercise staying a healthy weight. A small 1-5% of Alzheimer’s patients have genetic differences. Genetic risks can be caused by autosomal dominant inheritance, which is often found in early onset cases. It usually can be connected to mutations of the amyloid precursor protein (APP) or the presenilins one and two. If this is the case, the production of protein Abeta42, the main component of senile plaques, increases. Most other cases are simply sporadic AD where environment and genes can come into play as risk factors. For example, the inheritance of epsilon4 allele of the apolipoprotein E (APOE) is present in forty to eighty percent of patients with the disease. It increases the risk by three times in heterozygotes and by fifteen times in homozygotes. Other genes that could also put you at risk are CASS4, CELF1, FERMT2, HLA-DRB5, INPP5D, MEF2C, NME8, PTK2B, SORL1, ZCWPW1, SIC24A4, CLU, PICALM, CR1, MS4A, ABCA7, EPHA1, and CD2AP. TREM2 is another gene, but puts you at three to five times higher in terms of developing Alzheimer’s disease. When this gene is mutated, the white blood cells in the brain have no control over the amount of beta amyloid present.

Cholinergic hypothesis may be the oldest hypothesis which basically says that Alzheimer’s is caused by a lack of synthesis by the neurotransmitter acetylcholine. This hypothesis is not supported nationwide because medications to help the acetylcholine synthesize faster have not been effective.

The Amyloid hypothesis is twenty seven years old but claims that extracellular amyloid beta deposits are the cause of the disease. This theory can be supported by the location of the gene for the APP on chromosome 21, in combination with the fact that people with down syndrome (trisomy 21) who have an extra gene, exhibit early symptoms of AD by forty. One particular isoform of apolipoprotein, is another major risk factor for Alzheimer’s because it may not be as effective at breaking down the beta amyloid, which then leads to excess buildup around the neurons, causing Alzheimer’s. Furthermore, evidence has been found in transgenic mice that have a mutation of the APP gene which develops fibrillar amyloid plaques. When finding these plaques, they also observed similar spatial deficits that are also found in Alzheimer’s patients.

The Physiology and Genetics Behind Alzheimer Disease