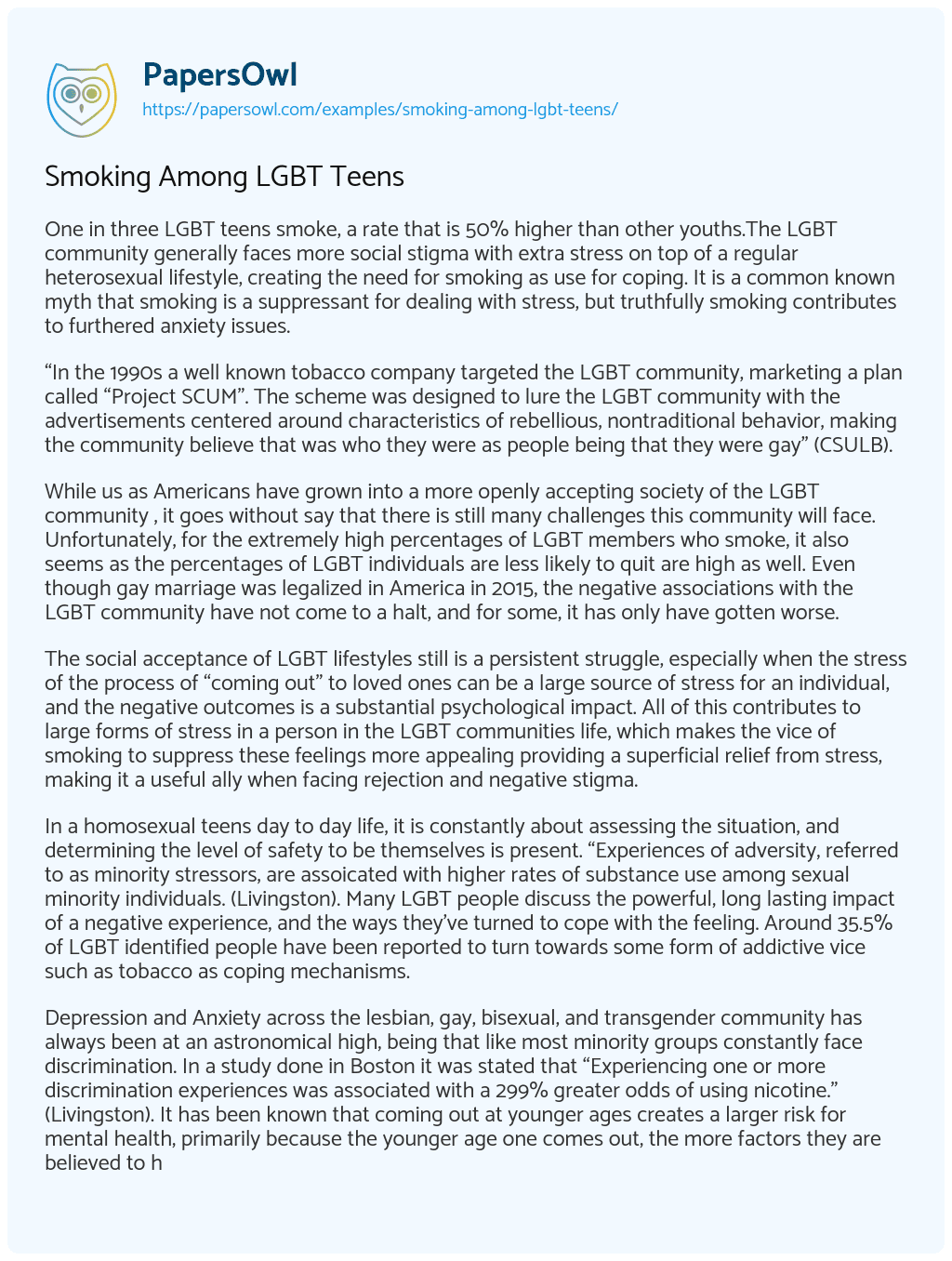 One in three LGBT teens smoke, a rate that is 50% higher than other youths.The LGBT community generally faces more social stigma with extra stress on top of a regular heterosexual lifestyle, creating the need for smoking as use for coping. It is a common known myth that smoking is a suppressant for dealing with stress, but truthfully smoking contributes to furthered anxiety issues.

“In the 1990s a well known tobacco company targeted the LGBT community, marketing a plan called “Project SCUM”. The scheme was designed to lure the LGBT community with the advertisements centered around characteristics of rebellious, nontraditional behavior, making the community believe that was who they were as people being that they were gay” (CSULB).

While us as Americans have grown into a more openly accepting society of the LGBT community , it goes without say that there is still many challenges this community will face. Unfortunately, for the extremely high percentages of LGBT members who smoke, it also seems as the percentages of LGBT individuals are less likely to quit are high as well. Even though gay marriage was legalized in America in 2015, the negative associations with the LGBT community have not come to a halt, and for some, it has only have gotten worse.

The social acceptance of LGBT lifestyles still is a persistent struggle, especially when the stress of the process of “coming out” to loved ones can be a large source of stress for an individual, and the negative outcomes is a substantial psychological impact. All of this contributes to large forms of stress in a person in the LGBT communities life, which makes the vice of smoking to suppress these feelings more appealing providing a superficial relief from stress, making it a useful ally when facing rejection and negative stigma.

In a homosexual teens day to day life, it is constantly about assessing the situation, and determining the level of safety to be themselves is present. “Experiences of adversity, referred to as minority stressors, are assoicated with higher rates of substance use among sexual minority individuals. (Livingston). Many LGBT people discuss the powerful, long lasting impact of a negative experience, and the ways they’ve turned to cope with the feeling. Around 35.5% of LGBT identified people have been reported to turn towards some form of addictive vice such as tobacco as coping mechanisms.

Depression and Anxiety across the lesbian, gay, bisexual, and transgender community has always been at an astronomical high, being that like most minority groups constantly face discrimination. In a study done in Boston it was stated that “Experiencing one or more discrimination experiences was associated with a 299% greater odds of using nicotine.” (Livingston). It has been known that coming out at younger ages creates a larger risk for mental health, primarily because the younger age one comes out, the more factors they are believed to have to face, being that is America gay marriage is legal, people in the LGBT community come out at all ages.

Mental Health and Tobacco usage have been shown to directly correlate being that it is providing a form of relief one may be lacking due to the negative associations of them as a person. The outside stress is not the only factor, there is also the factor of internalized struggle. Commonly it is overlooked what the strength a teen as young as fourteen has to have in order to come out, and if this goes negatively for them it creates interlized and external issues. All the more reason why the reach for a substance, such as tobacco becomes more appealing.

Tobacco companies tend to market in highly attended LGBT youth events such as pride parades, and LGBT advocacy marches. The smoking rates of LGBT teens are just as high as those of adults, the percentage being just under 50% for gay men and women. Tobacco companies also have sponsored pride events, and given money to LGBT HIV/AIDS organization, misleading you to think they are an ally.

The industry openly targets the LGBT community placing ads in LGBT populated areas. These ads twice cherished LGBT values, like freedom, choice and pride, manipulating them to make smoking seem appealing. Being that this false sense of support was created throughout the community, the lack of knowledge from individuals about this matter creates for a dangerous environment. The tobacco industry has been after the LGBT community since 1991, when a campaign of famous homosexual individuals were depicted smoking cigarettes, and how they were role models for younger LGBT youths. Depending on where you are raised, the level of support very much varies.

The idea tobacco companies market is “solidarity”, this being a huge attraction to potentially unsupported or closeted LGBT youths being that they can find relief in the form of nicotine. Other ad campaigns have targeted the community more secretly by labeling there ads with sentences like “freedom to choose” “freedom to marry” “freedom to inhale.” Tobacco companies are known for researching major predictors of tobacco use and going after those groups knowing of only profit. LGBT Teens have plenty reason for rebellion from a society that has ostracized them. “A cigarette is not a delivery system for nicotine. It’s a delivery system for rebellion” (Livingston).

Aside from the rebellious culture homosexual teens feel there is another attraction to nicotine, which is centered around the disrespect and counterculture towards conservative norms. LGBT youths have been known for speaking out on the matter of support lacking from this community, being that in these conservative cultures it is more than frequently that they are labeled as abnormal humans. The tobacco industry has directly played its role to many young LGBT youths experience of oppression. For the big tobacco companies, the LGBT teen is simply another convenient group of consumers.

Despite existing protections, the LGBT community faces disturbing rates of health care discrimination. Recently there has been a bigger push towards the alarming numbers in the LGBT youth community surrounding nicotine, but even in all its efforts numbers are still high. Even though there also been a spike in younger coming outs, and transitioning for the community, there is still many individuals that remain closeted. For those teens who are still not out, the idea of being outed is far more terrifying. Anti smoker advocates have worked there efforts to put plenty of free resources and hotlines for teens to call to seek help, but this is not specific to the LGBT community.

Being that the forms of cessation are not specific to the community LGBT teens are often afraid to reach out being that they are then at risk of being outed. In teens ranging from ages 14-19 more than half of them are still not out yet, and if this is the case that is still hald the community that is missing the opportunity to be able to quit. LGBT youths often face a lot more issues due to the fact they are so young and most likely are still in non secondary educations yet, and live at home with parental guidance.

Even though anti-smoking campaigns have recently spiked in television ads and printed throughout various media outlets, there is no guarantee that an individual can receive these forms of help without it going unnoticed. “LGBT youths are 5 times more likely to never contact a smoking cessation quitline” (CDC). Most teens have health care that is a teen has it provided through their parental guidance. LGBT teens deal with a large form of discriminatory healthcare practices, driving them away from all forms of healthcare, creating the stigma of smoking cessation harder.

Lesbian, gay, bisexual, and transgender teens smoke at a considerably higher rate than the general population. The driving factors behind LGBT disparities in tobacco use are stress due to social stigma, discrimination and aggressive marking by the tobacco industry. Being that the social stigma is not always positive, negative peer pressure comes into effect and creates the idea that one in the LGBT community rather deal with tobacco rather to not receive judgements from their peers, creating a the negative association of confronting an external source for help.

In recent years LGBT advocacy groups have begun to create LGBT friendly pro-quitting programs in effort that the community will recognize the safety behind them, and reach out. Companies like This Free Life have recently released campaigns showcasing an LGBT tobacco free lifestyle, with there slogan “We own our labels, our identities are beautifully complex, so we refuse to let cigarettes damage our bodies, or any later of who we are (This Free Life).

In order to fully change the way the LGBT smoking statistics are, they are going to have to directly engage with the community themselves to offer these cessation efforts and present them in a way that is culturally competent. LGBT youths have already exposed to many different forms of negative culture, in order to protect them we have to learn how to market them by influencing them positively.

A lot of younger LGBT teens don’t have the knowledge or education to support them. It is a matter of research and advocacy in order to create effective tobacco control policies that become an ally the LGBT youths. With the recent spike in counter-marketing campaign it speaks to these teens through channels and form of social media they understand and trust. Even though targeting youths has become a priority among the anti-smoking advocates, we have to reach everyone, the LGBT youths need someone to advocate for them as well.

Smoking Among LGBT Teens. (2021, May 14). Retrieved from https://papersowl.com/examples/smoking-among-lgbt-teens/

Effects of Smoking on Teens

The Negative Effects of Smoking in the US

A Problem of Teen Smoking

Effects of Smoking in Modern World