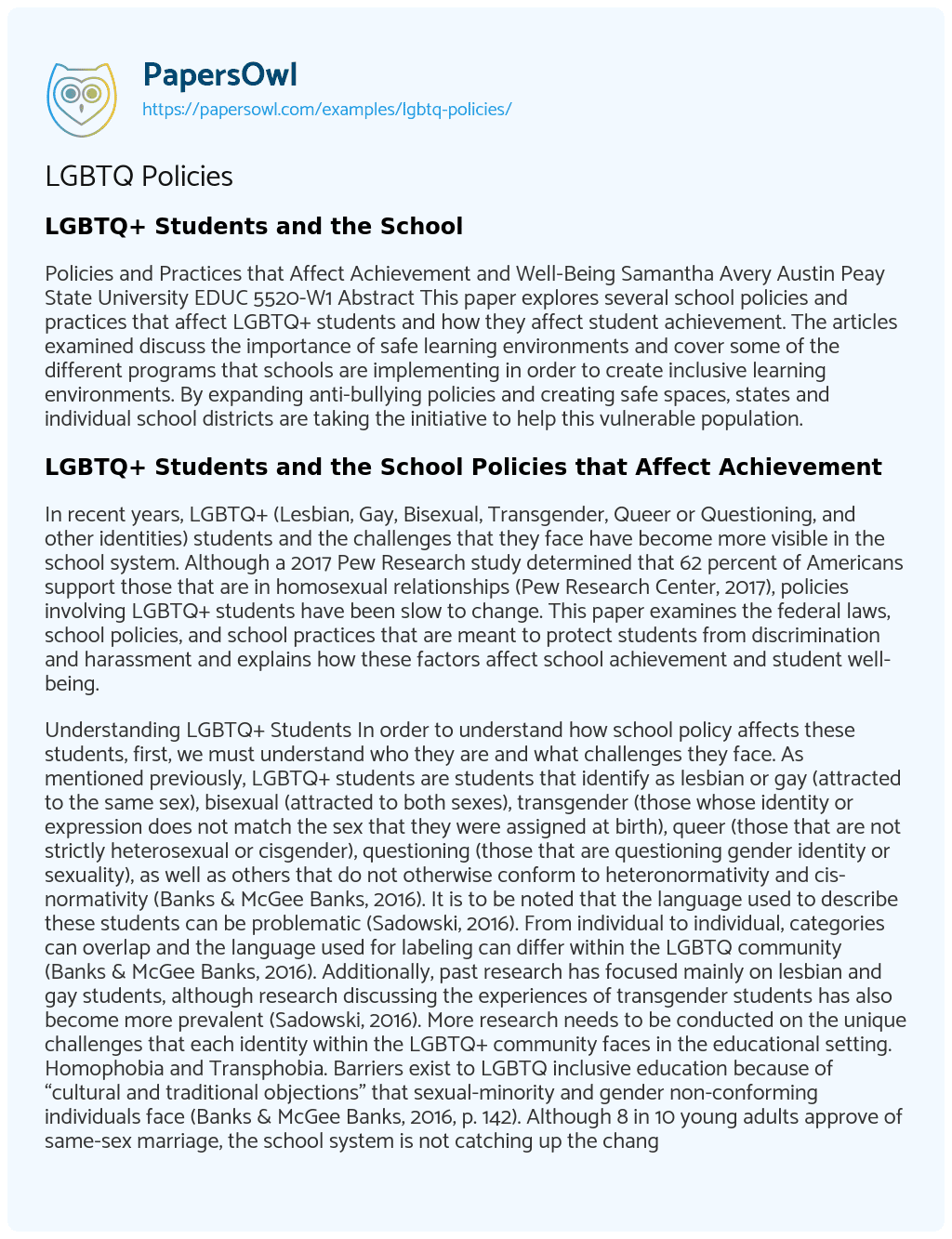 LGBTQ+ Students and the School

Policies and Practices that Affect Achievement and Well-Being Samantha Avery Austin Peay State University EDUC 5520-W1 Abstract This paper explores several school policies and practices that affect LGBTQ+ students and how they affect student achievement. The articles examined discuss the importance of safe learning environments and cover some of the different programs that schools are implementing in order to create inclusive learning environments. By expanding anti-bullying policies and creating safe spaces, states and individual school districts are taking the initiative to help this vulnerable population.

LGBTQ+ Students and the School Policies that Affect Achievement

In recent years, LGBTQ+ (Lesbian, Gay, Bisexual, Transgender, Queer or Questioning, and other identities) students and the challenges that they face have become more visible in the school system. Although a 2017 Pew Research study determined that 62 percent of Americans support those that are in homosexual relationships (Pew Research Center, 2017), policies involving LGBTQ+ students have been slow to change. This paper examines the federal laws, school policies, and school practices that are meant to protect students from discrimination and harassment and explains how these factors affect school achievement and student well-being.

Understanding LGBTQ+ Students In order to understand how school policy affects these students, first, we must understand who they are and what challenges they face. As mentioned previously, LGBTQ+ students are students that identify as lesbian or gay (attracted to the same sex), bisexual (attracted to both sexes), transgender (those whose identity or expression does not match the sex that they were assigned at birth), queer (those that are not strictly heterosexual or cisgender), questioning (those that are questioning gender identity or sexuality), as well as others that do not otherwise conform to heteronormativity and cis-normativity (Banks & McGee Banks, 2016). It is to be noted that the language used to describe these students can be problematic (Sadowski, 2016). From individual to individual, categories can overlap and the language used for labeling can differ within the LGBTQ community (Banks & McGee Banks, 2016). Additionally, past research has focused mainly on lesbian and gay students, although research discussing the experiences of transgender students has also become more prevalent (Sadowski, 2016). More research needs to be conducted on the unique challenges that each identity within the LGBTQ+ community faces in the educational setting. Homophobia and Transphobia. Barriers exist to LGBTQ inclusive education because of “cultural and traditional objections” that sexual-minority and gender non-conforming individuals face (Banks & McGee Banks, 2016, p. 142). Although 8 in 10 young adults approve of same-sex marriage, the school system is not catching up the change in public opinion (Banks & McGee Banks, 2016). Policies and practices are still driven by traditionalist notions and misunderstandings of LGBTQ students. This misunderstanding and anxiety around gender non-conformity is also what fuels some of the harassment that LGBTQ+ youth face. Homophobia can manifest as dislike, harassment, and even physical violence against LGB students (Banks & McGee Banks, 2016).

Transgender students face transphobia through the dismissal of their identity from teachers, fellow students, and administrators refusing to use their preferred names and pronouns (National Center for Transgender Equality, 2019). The issue surrounding the usage of public restrooms has also been a point of contention. Transgender students are often made to use the restrooms of the sex that they were assigned at birth, which can cause anxiety and embarrassment (National Center for Transgender Equality, 2019). Challenges Faced in School. LGBTQ+ students are often subjected to harassment and bullying by fellow students, faculty, and other members of the community. According to the Centers for Disease Control (CDC) in a 2015 Youth Risk Behavior Survey, 10 percent of LGB youth had been threatened with or injured by a weapon on school property (CDC, 2017).

Thirty- four percent were bullied on school property, and 28 percent of students were bullied electronically (through social media, email, web applications, etc.) (CDC, 2017). Transgender students are at an even higher risk than LGB students. According to the National Center for Transgender Equality (2019), 75 percent of transgender students report not feeling safe at school (National Center for Transgender Equality, 2019). The Importance of Safe Learning Environments. In order for students to learn, they must have a safe learning environment (Corbat, 2017; Sadowski, 2016). Schools with positive climates have shown to increase student engagement and academic performance (Konold, Cornell, Jia, & Malone, 2018). LGBTQ+ students suffer from “academic, health, and mental health problems” from the harassment and bullying that they face in school (Sadowski, 2016, p. 5). Transgender students, for example, have lower GPA’s, miss more school, and are more likely to drop out of school because of their lack of safety (National Center for Transgender Equality, 2019). Federal Law LGBTQ+ people are not considered to be a protected class under federal law (EEOC, 2019).

Currently, the seven protected classes are as follows: race, color, national origin, religion, sex, age, and disability (EEOC, 2019). There have been efforts to try to change this, however. In April 2019, the Supreme Court accepted to hear court cases that ask the question of whether or not employers can discriminate on the basis of sexual orientation and gender identity (NPR, 2019). This means that soon the federal law could also recognize LGBTQ individuals as a protected class. There are also no federal policies that directly protect LGBTQ students. However, states are beginning to recognize the problems that LGBTQ+ students face. They are beginning to implement policies and follow certain practices that help create a more inclusive school environment.

A Brief History of LGBT School Policies and Practices Because of the bullying and harassment that LGBTQ+ students face, states and individual school districts have started acknowledging their lapses in anti-discrimination and anti-bullying policies and practices. The New York City Board of Education was one of the first districts to “recognize sexual orientation as a protected class” in 1985 (Banks & McGee Banks, 2016, p. 137). Massachusetts was the first state to address the conditions that LGBTQ+ students were facing in school (Sadowski, 2016). In 1989, they established the Governors’ Commission on Gay and Lesbian Youth, which addressed the issues of lesbian and gay suicides (Sadowski, 2016). This commission eventually led to the United States’ first state-funded program to help gay and lesbian students (Sadowski, 2016). Since then, other states have begun to follow suit. Modern Day Anti-Bullying Policies In recent years, nearly every U.S state has expanded or created new anti-bullying policies due to the rise in high-profile cases of harassment and bullying of students in schools (Sadowski, 2016).

Twenty-eight percent of students experience bullying in schools with policies that are LGBTQ+ inclusive compared to 36 percent of students in schools without any anti-bullying policy (Kull, Kosciw, & Greytak, 2015). So, in order to promote the safety of LGBTQ+ students, specific language must be used in future anti-bullying policies (Kull, Kosciw, & Greytak, 2015). LGBTQ+ “Safe Zones” Another practice that schools are adopting is the implementation of safe zones (Sadowski, 2016) Safe zones are meant to improve the school climate for sexual and gender minority students in a school. These “safe zones” are often labeled with a sticker or a sign in order to communicate that a classroom or office is a place where students can talk about LGBTQ+ topics with someone without being made to feel uncomfortable or face the fear of being “outed” by the adult that they are speaking with (Sadowski, 2016). Educators that make safe zones for LGBTQ+ students want to “challenge anti-LGBTQ language and harassment when it occurs” and are open to having these conversations; they are also often a member of the LGBTQ community themselves (Sadowski, 2016, p. 7).

LGBTQ+ students’ inability to feel safe in their schools hurts their potential for academic achievement and overall wellbeing. Progress is continuing to be made to help LGBTQ+ students achieve in school, but policies have been slow to change. Many states are taking initiative and making considerable strides in making policies with explicit language that helps students know their rights and helps educators ensure that those rights are not violated. Continued research needs to be done on the long-term impacts of LGBTQ inclusive curricula. Additionally, federal laws need to catch up with the progress that states are making in ensuring the safety and well-being of LGBTQ+ students.