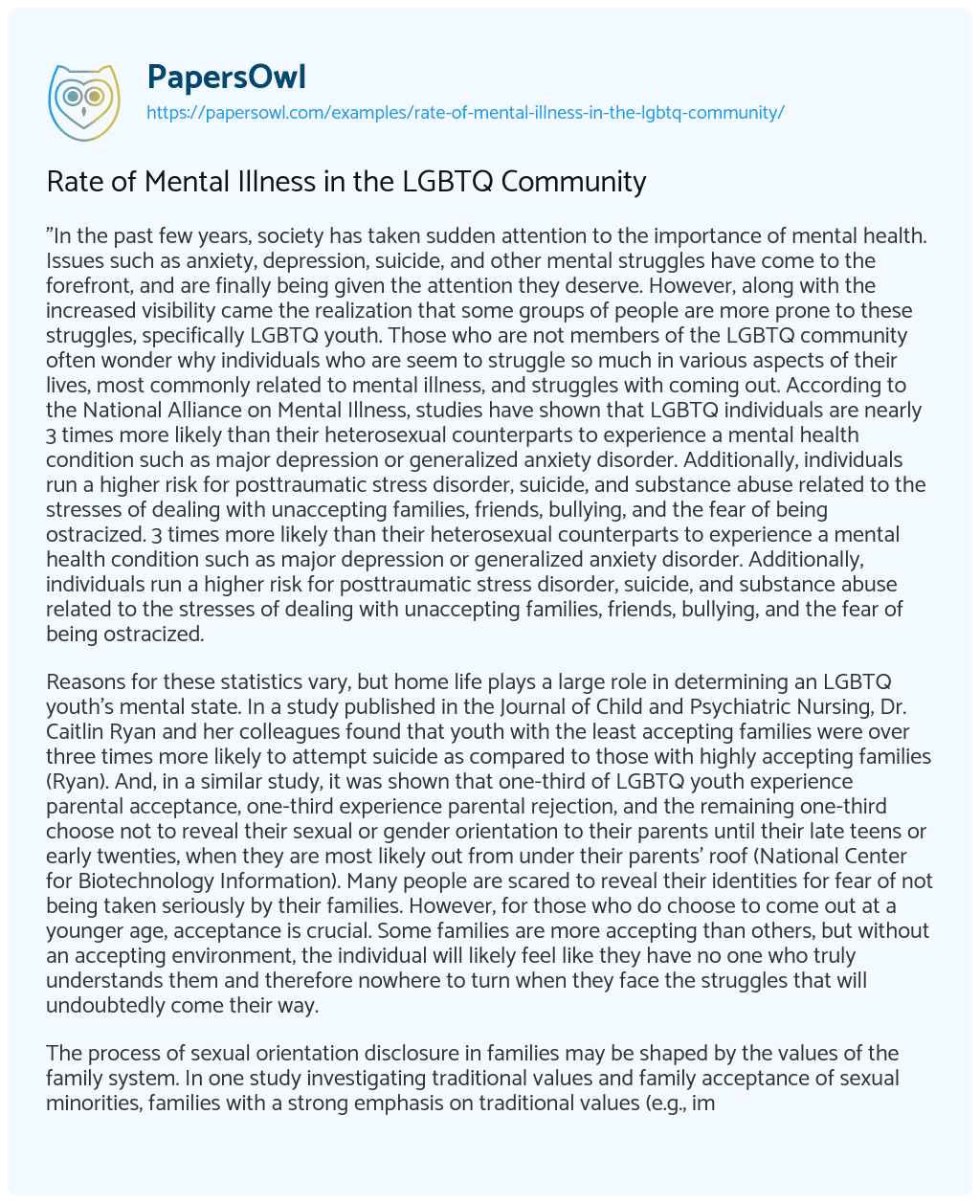 Reasons for these statistics vary, but home life plays a large role in determining an LGBTQ youth’s mental state. In a study published in the Journal of Child and Psychiatric Nursing, Dr. Caitlin Ryan and her colleagues found that youth with the least accepting families were over three times more likely to attempt suicide as compared to those with highly accepting families (Ryan). And, in a similar study, it was shown that one-third of LGBTQ youth experience parental acceptance, one-third experience parental rejection, and the remaining one-third choose not to reveal their sexual or gender orientation to their parents until their late teens or early twenties, when they are most likely out from under their parents’ roof (National Center for Biotechnology Information). Many people are scared to reveal their identities for fear of not being taken seriously by their families. However, for those who do choose to come out at a younger age, acceptance is crucial. Some families are more accepting than others, but without an accepting environment, the individual will likely feel like they have no one who truly understands them and therefore nowhere to turn when they face the struggles that will undoubtedly come their way.

Simply stated, families who are more deeply rooted in strict religious views or families with a more rigid or conservative set of values will be less likely to be accepting. In another study by the NCBI, it was found that LGBTQ youth with higher levels of family rejection were more likely to report attempted suicide, high levels of depression, illegal drug use, and engagement in unprotected sex. Not to mention household tension adding a new level of stressors, which further increases the already-high risk.

At school, LGBTQ youth face the struggles that come from not conforming to the norm. Being out as an adult is often associated with positive social adjustment, and is very beneficial and healthy for those who have struggled with discrimination in the past. Studies show it can be very beneficial for youth as well when faced with positive reinforcement. However, results from the 2017 Youth Risk Behavior Survey show that thirty three percent of LGBTQ students, or even those perceived as such, have reported being bullied on school property, and twenty seven percent have been bullied online. Bullying, amongst other factors, puts LGBTQ youth at an increased risk for depression, suicide ideation, misuse of drugs and alcohol, and can even affect academics (StopBullying.gov). Oftentimes, LGBTQ youth feel rejected and are looking for someone who will come to them with understanding, not judgement. By acting as a non judgemental confidant for those who need it, teachers, parents, and even other students can help decrease these risks, and be the stability that those individuals crave.

Unsurprisingly, involvement in religion is often a controversial and sometimes dangerous factor for LGBTQ youth. Many religious groups are known to be unsupportive of gay rights, and tend to view homosexuality as unnatural, or against their religious beliefs. Though generalizations cannot be made and not all religious people are unaccepting, a large majority is perceived to be. Accepting churches and pastors can be an influential resource for gay youth who have nowhere else to go. Oftentimes though, LGBTQ people, youth especially, feel unaccepted in their churches, or even in their homes. According to the religious institute, up to fourteen percent of religious teenagers identify as LGBTQ. However, only a fraction of those are open about their sexual or gender identity with their clergy (Clapp, Helbert, Zizak).

Despite some exceptions, however, society as a whole has massively increased acceptance and awareness in the last ten years, therefore creating a much safer environment for LGBTQ individuals to be themselves. However, this was not always the case. In the past, when the LGBTQ community was less accepted in society, same-sex attraction was considered a mental illness, and even listed in the Diagnostic and Statistical Manual for Mental Disorders. Reparative or conversion therapy was a fairly common practice most often conducted by religious groups to eradicate homosexual tendencies in individuals.

Conversion therapy began in 1899, when Albert von Schrenck-Notzing, a German psychiatrist, claimed that he had made a gay man straight through “hypnosis and a few trips to a brothel” (Blakemore). In the late nineteenth century, same-sex attraction became recognized by doctors and psychiatrists who then started looking for a ‘cure.’ From there, conversion therapy grew, becoming a cruel and common practice throughout the twentieth century. Though it was oftentimes ineffective, by using aversion therapy, shock therapy, and many other forms of physical and mental manipulation, people were tortured by religious and medical organizations in an effort to pressure them to revert to a heterosexual lifestyle. According to Blakeman, “Though the concept of gay conversion still exists today, a growing tide has turned against the practice. Today, 13 states and the District of Columbia have laws that ban gay conversion therapy practices.” When taken into account where society’s mentality was back then, huge strides have been made to show acceptance and love to all people. However, it is easy to see where the fear is rooted for LGBTQ people, because if society was once so hateful, what is stopping them from being that way again?

As with many things, people who are not affected by an issue oftentimes do not understand it. And with the sudden rise in support, only fifty five percent of Americans believe that lesbian and gay people still face discrimination, which has decreased from sixty eight percent in 2013. Additionally, fifty four percent of the population feels satisfied with the level of acceptance currently displayed (Cox). Some people believe that because there have been increased levels of support, there is no longer a struggle. However, they lack the personal experience that is necessary to realize how false that statement is. While they may have faced issues similar to those LGBTQ people have to face, it may not be enough for them to understand.

Issues such as unaccepting parents, harsh schoolmates, the political climate, and people all around them questioning and judging them for something they cannot change or control takes a huge toll on a young person. And, for adults, being legally unable to be married or to have children is a heartbreaking issue that many do not seem to take into account. Facing adult-level stressors while still at an age of development and growth is the main reason why the youth of the LGBTQ community is at such a higher risk for mental illness. And for adults as well, these stresses only grow. Simply put, life is hard.

For individuals who choose not to disclose their sexual or gender orientation, life can be even harder. According to Mental Health America, “LGBT individuals that keep their sexuality hidden are at an increased risk of psychological distress. This also prevents them from accessing group-based coping resources that buffer against the negative effects of stigma.” When people choose not to express who they truly are, they constantly feel as though they are putting up a front, or pretending to be someone they aren’t. This can lead to feeling distanced in social situations, growing apart from friends and family, and an increased sense of loneliness or isolation, which is especially dangerous given the already high rate of depression, anxiety, and suicide. Feeling as though they are constantly putting on a show, it is likely that anxiety will be more severe for these individuals because of the stress of fearing someone will discover what they likely view as their biggest secret.

Bisexuals experience high rates of being ignored, discriminated against, demonized, or rendered invisible by both the heterosexual world and the lesbian and gay communities. Often, the entire sexual orientation is branded as invalid, immoral, or irrelevant. Despite years of activism, the needs of bisexuals still go unaddressed and their very existence is still called into question (San Francisco Human Rights Commission).

Essentially, bisexuals are discredited by the heterosexual community for not being fully straight, and also by the lesbian and gay communities for not being fully gay. And, despite making up roughly half of the LGBTQ community, their sexuality is often not taken as seriously. All of these factors result in bisexuals having even more of a predisposition for anxiety or depression.

According to Taylor & Francis Online, “Over the past decade, evidence has accumulated to suggest that bisexual people experience higher rates of poor mental health outcomes compared to both heterosexual and gay/lesbian individuals.” Essentially, the lowest rates of depression and anxiety are among heterosexual people, while the highest rates are most often exhibited by bisexual people, even in comparison to lesbian and gay people. The proposed causes of these statistics are “experiences of sexual orientation-based discrimination, bisexual invisibility/erasure, and lack of bisexual-affirmative support” (Taylor and Francis Online).

With the sudden wave of attention being paid to mental health and its importance, more has been learned about the chronically high rates of struggles in the LGBTQ community. More research has been done to better understand the increased rates of depression, anxiety, and suicide that the community faces, and to learn what can be done about it. The LGBTQ community, youth especially, faces being 3 times more likely than their heterosexual counterparts to experience a mental health condition such as major depression or generalized anxiety disorder, not to mention the much higher risk they face for posttraumatic stress disorder, suicide, and substance abuse.

Whether the source be a lack of family acceptance, feelings of not fitting in, religion or otherwise-based discrimination, or even lack of bisexual-affirmative support, the mental state of the LGBTQ community is an issue not often addressed. However, its significance should not be ignored. At this exact moment in this rapidly-accelerating world, so many people are struggling with things they choose to keep hidden. As society moves forward in its progressiveness, a change in dialogue is necessary to be inclusive of all people in a way that was never possible before. Mental health should not be taken lightly, and a change is needed to make an effort to recognize individuals’ struggles and needs, and to provide a helping hand to anyone who needs it, regardless of their differences.”

Rate of Mental Illness in the LGBTQ Community. (2021, May 27). Retrieved from https://papersowl.com/examples/rate-of-mental-illness-in-the-lgbtq-community/

How do the Tenets of Christianity and Islam Affect Teens in the LGBTQ Community ?

Racism and Mental Illness in America