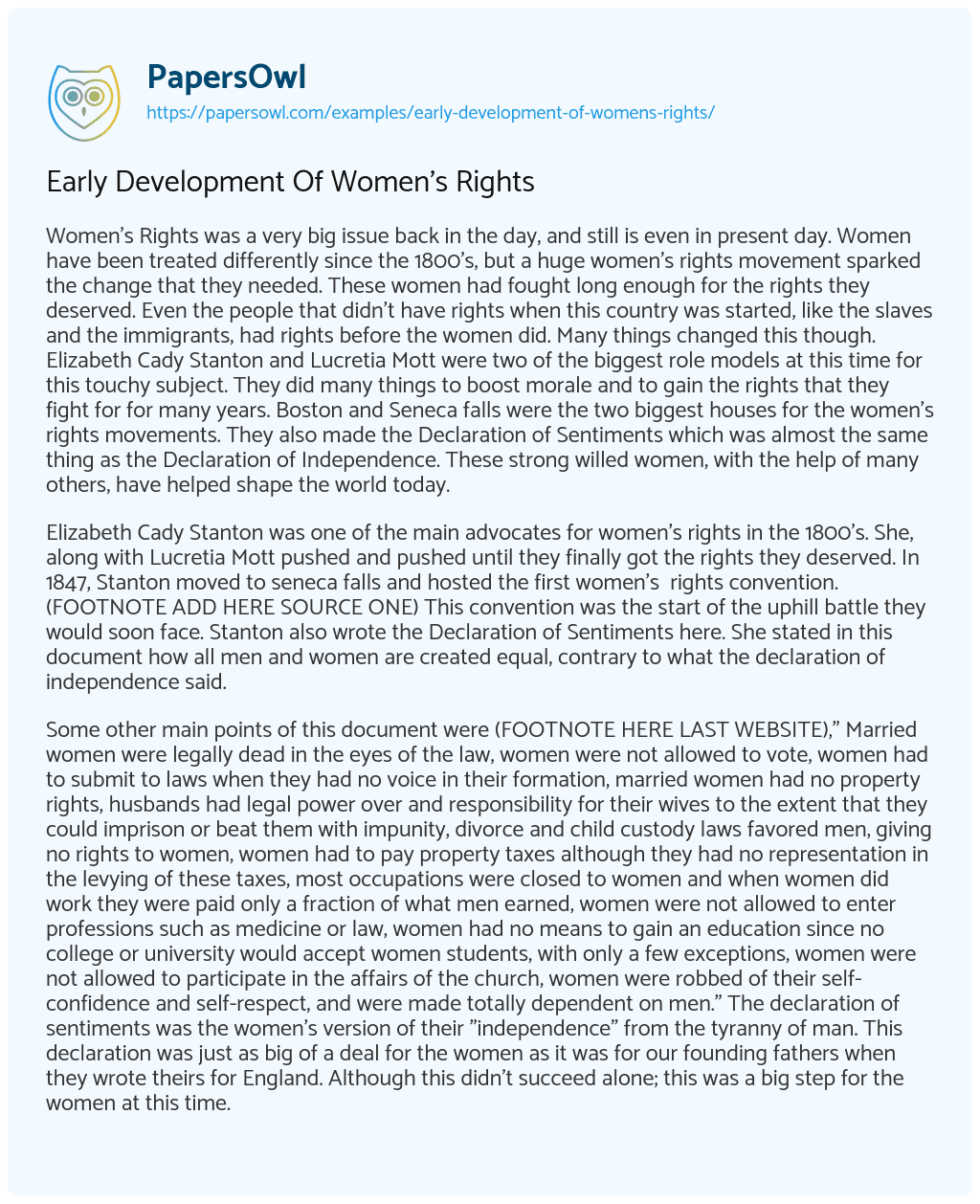 Women’s Rights was a very big issue back in the day, and still is even in present day. Women have been treated differently since the 1800’s, but a huge women’s rights movement sparked the change that they needed. These women had fought long enough for the rights they deserved. Even the people that didn’t have rights when this country was started, like the slaves and the immigrants, had rights before the women did. Many things changed this though. Elizabeth Cady Stanton and Lucretia Mott were two of the biggest role models at this time for this touchy subject. They did many things to boost morale and to gain the rights that they fight for for many years. Boston and Seneca falls were the two biggest houses for the women’s rights movements. They also made the Declaration of Sentiments which was almost the same thing as the Declaration of Independence. These strong willed women, with the help of many others, have helped shape the world today.

Elizabeth Cady Stanton was one of the main advocates for women’s rights in the 1800’s. She,  along with Lucretia Mott pushed and pushed until they finally got the rights they deserved. In 1847, Stanton moved to seneca falls and hosted the first women’s  rights convention. (FOOTNOTE ADD HERE SOURCE ONE) This convention was the start of the uphill battle they would soon face. Stanton also wrote the Declaration of Sentiments here. She stated in this document how all men and women are created equal, contrary to what the declaration of independence said.

Some other main points of this document were (FOOTNOTE HERE LAST WEBSITE),” Married women were legally dead in the eyes of the law, women were not allowed to vote, women had to submit to laws when they had no voice in their formation, married women had no property rights, husbands had legal power over and responsibility for their wives to the extent that they could imprison or beat them with impunity, divorce and child custody laws favored men, giving no rights to women, women had to pay property taxes although they had no representation in the levying of these taxes, most occupations were closed to women and when women did work they were paid only a fraction of what men earned, women were not allowed to enter professions such as medicine or law, women had no means to gain an education since no college or university would accept women students, with only a few exceptions, women were not allowed to participate in the affairs of the church, women were robbed of their self-confidence and self-respect, and were made totally dependent on men.” The declaration of sentiments was the women’s version of their “independence” from the tyranny of man. This declaration was just as big of a deal for the women as it was for our founding fathers when they wrote theirs for England. Although this didn’t succeed alone; this was a big step for the women at this time.

Women Rights in all Countries

An Issue of Women’s International Rights