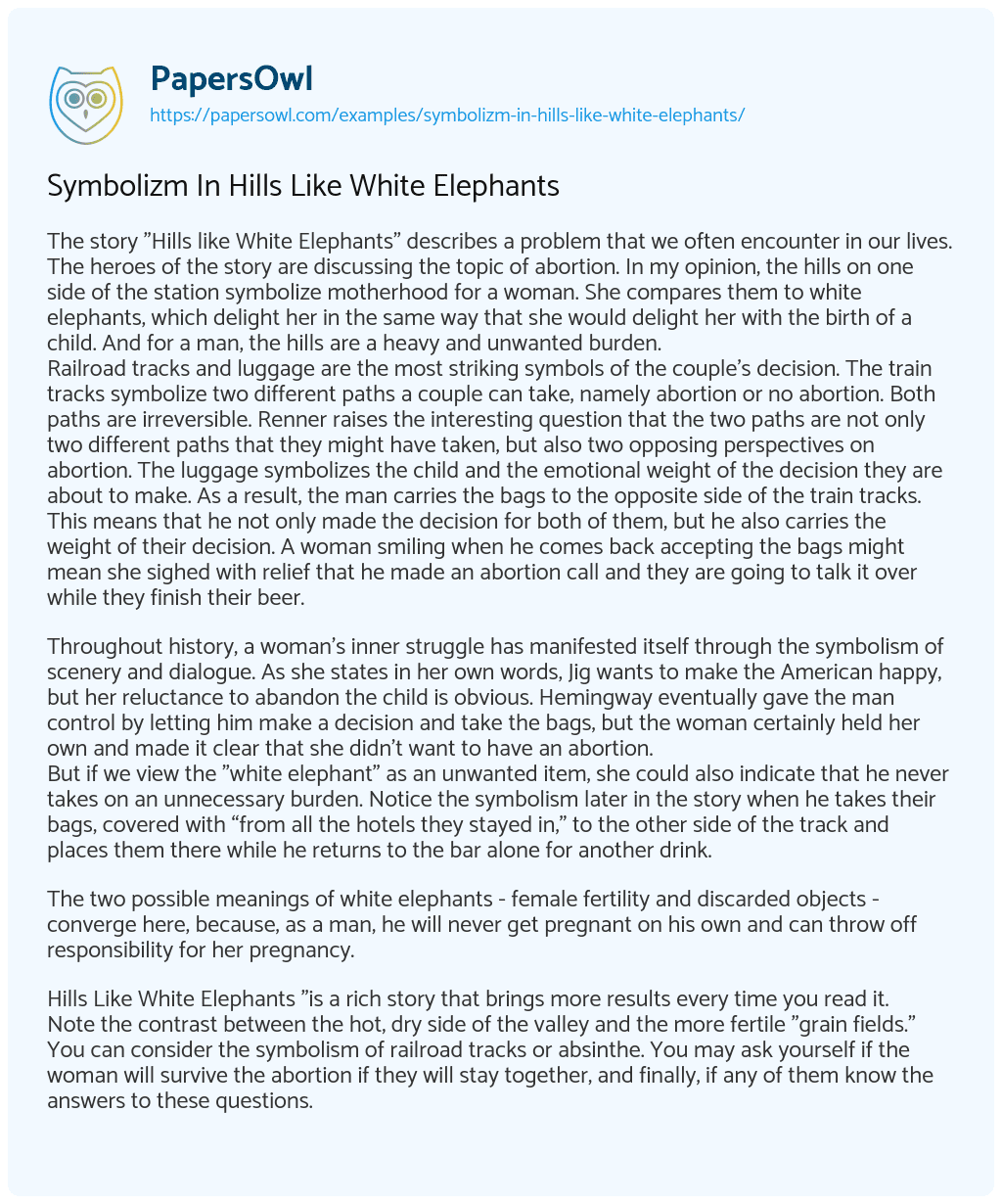 The story “Hills like White Elephants” describes a problem that we often encounter in our lives. The heroes of the story are discussing the topic of abortion. In my opinion, the hills on one side of the station symbolize motherhood for a woman. She compares them to white elephants, which delight her in the same way that she would delight her with the birth of a child. And for a man, the hills are a heavy and unwanted burden.
Railroad tracks and luggage are the most striking symbols of the couple’s decision. The train tracks symbolize two different paths a couple can take, namely abortion or no abortion. Both paths are irreversible. Renner raises the interesting question that the two paths are not only two different paths that they might have taken, but also two opposing perspectives on abortion. The luggage symbolizes the child and the emotional weight of the decision they are about to make. As a result, the man carries the bags to the opposite side of the train tracks. This means that he not only made the decision for both of them, but he also carries the weight of their decision. A woman smiling when he comes back accepting the bags might mean she sighed with relief that he made an abortion call and they are going to talk it over while they finish their beer.

Throughout history, a woman’s inner struggle has manifested itself through the symbolism of scenery and dialogue. As she states in her own words, Jig wants to make the American happy, but her reluctance to abandon the child is obvious. Hemingway eventually gave the man control by letting him make a decision and take the bags, but the woman certainly held her own and made it clear that she didn’t want to have an abortion.
But if we view the “white elephant” as an unwanted item, she could also indicate that he never takes on an unnecessary burden. Notice the symbolism later in the story when he takes their bags, covered with “from all the hotels they stayed in,” to the other side of the track and places them there while he returns to the bar alone for another drink.

The two possible meanings of white elephants – female fertility and discarded objects – converge here, because, as a man, he will never get pregnant on his own and can throw off responsibility for her pregnancy.

Hills Like White Elephants ”is a rich story that brings more results every time you read it.
Note the contrast between the hot, dry side of the valley and the more fertile “grain fields.” You can consider the symbolism of railroad tracks or absinthe. You may ask yourself if the woman will survive the abortion if they will stay together, and finally, if any of them know the answers to these questions.

Symbolizm In Hills Like White Elephants. (2021, Jul 13). Retrieved from https://papersowl.com/examples/symbolizm-in-hills-like-white-elephants/