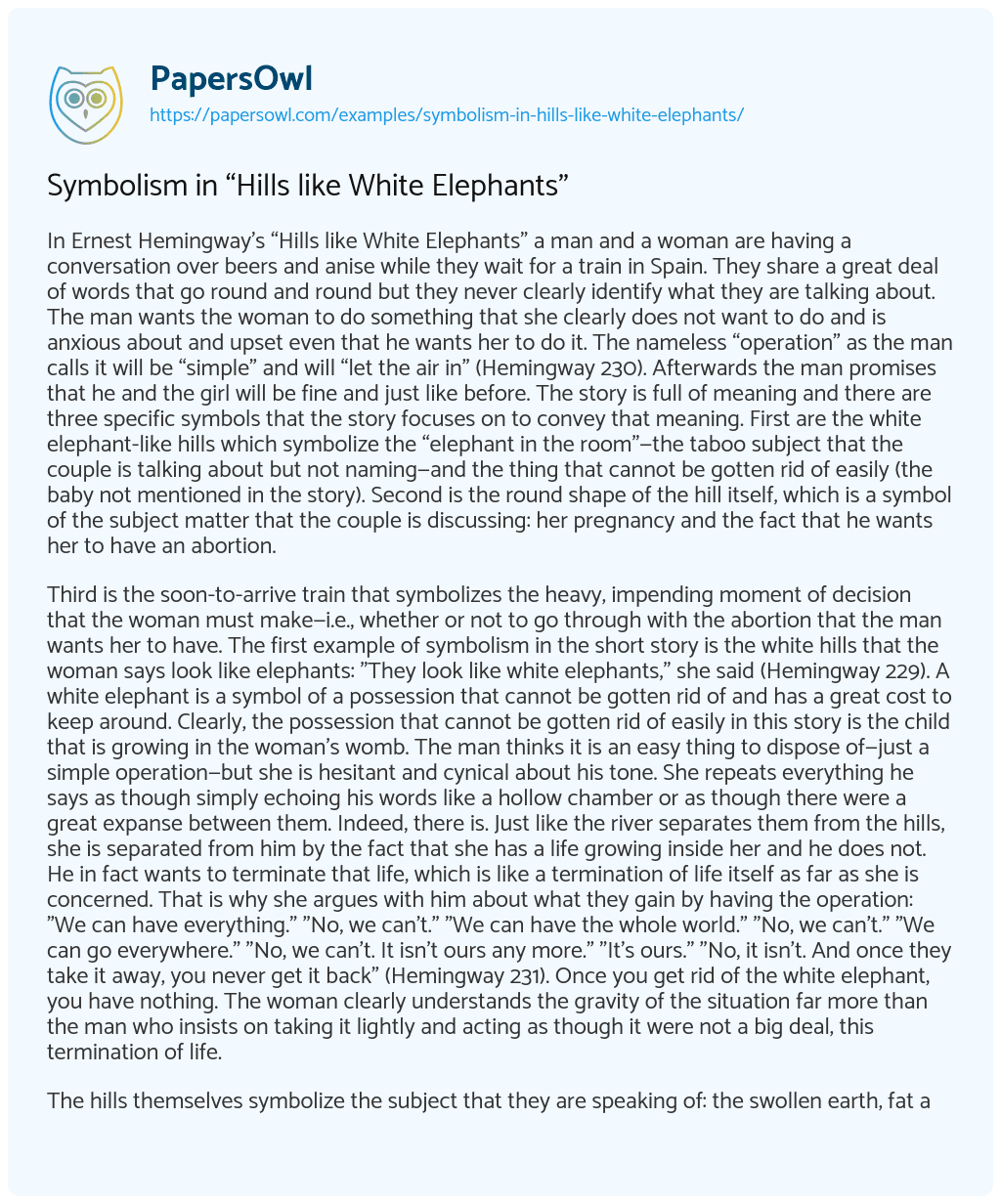 In Ernest Hemingway’s “Hills like White Elephants” a man and a woman are having a conversation over beers and anise while they wait for a train in Spain. They share a great deal of words that go round and round but they never clearly identify what they are talking about. The man wants the woman to do something that she clearly does not want to do and is anxious about and upset even that he wants her to do it. The nameless “operation” as the man calls it will be “simple” and will “let the air in” (Hemingway 230). Afterwards the man promises that he and the girl will be fine and just like before. The story is full of meaning and there are three specific symbols that the story focuses on to convey that meaning. First are the white elephant-like hills which symbolize the “elephant in the room”—the taboo subject that the couple is talking about but not naming—and the thing that cannot be gotten rid of easily (the baby not mentioned in the story). Second is the round shape of the hill itself, which is a symbol of the subject matter that the couple is discussing: her pregnancy and the fact that he wants her to have an abortion.

Third is the soon-to-arrive train that symbolizes the heavy, impending moment of decision that the woman must make—i.e., whether or not to go through with the abortion that the man wants her to have. The first example of symbolism in the short story is the white hills that the woman says look like elephants: “They look like white elephants,” she said (Hemingway 229). A white elephant is a symbol of a possession that cannot be gotten rid of and has a great cost to keep around. Clearly, the possession that cannot be gotten rid of easily in this story is the child that is growing in the woman’s womb. The man thinks it is an easy thing to dispose of—just a simple operation—but she is hesitant and cynical about his tone. She repeats everything he says as though simply echoing his words like a hollow chamber or as though there were a great expanse between them. Indeed, there is. Just like the river separates them from the hills, she is separated from him by the fact that she has a life growing inside her and he does not. He in fact wants to terminate that life, which is like a termination of life itself as far as she is concerned. That is why she argues with him about what they gain by having the operation: “We can have everything.” “No, we can’t.” “We can have the whole world.” “No, we can’t.” “We can go everywhere.” “No, we can’t. It isn’t ours any more.” “It’s ours.” “No, it isn’t. And once they take it away, you never get it back” (Hemingway 231). Once you get rid of the white elephant, you have nothing. The woman clearly understands the gravity of the situation far more than the man who insists on taking it lightly and acting as though it were not a big deal, this termination of life.

The hills themselves symbolize the subject that they are speaking of: the swollen earth, fat and round like a swollen womb, fat with life—they symbolize her pregnancy. Though she is not described in these terms, when connected to the white elephant symbol and the operation the man speaks of the hills take on a symbolic meaning. Hemingway shows that the girl is enamored of the hills and is not opposed to the idea of being pregnant in the same way the man is by having her say, “They’re lovely hills” (230). She looks at them numerous times throughout the story and keeps talking about them. The man does not want to look at them or acknowledge what they look like. He keeps trying to push her in a gentle way towards accepting the idea. She is resistant, reluctant, and alternately passive and aggressive towards him. She wants to be fat like the earth and grow swollen like the hills, it is clear. She knows that after the abortion she will be bone dry and brown like the rest of the scorched earth around the hills. The hills represent the moral quandary that she is facing. If she goes through with the abortion, she will be deprived of life and grace and that is why she argues with him that the world will be taken away from them if they go through with it.

Finally, the train arriving within minutes is the symbol of the impending decision that must be made. The couple has danced round and round the topic. They have traveled together all over the map as their suitcase stickers show. They have lived together as husband and wife and now they have a child growing inside the woman’s womb. What to do? Let it live and let the woman’s love bear fruit, or kill it and let the man’s ego and desire for no responsibility turn the world brown and barren? The woman resists his egotistical impulses—but at the same time she has a desire to please him, to love him. She is torn, conflicted. She does not know to whom she owes the most duty—to him or to the child growing inside her. The only voice of conscience seems to emanate from the white hills, that tell her what is pure and good. The train all this time is fast approaching and will be there in a matter of moments. They argue back and forth never arriving at a decision—but life is coming and a decision must be made. The train will be there to take them one way or another—either to more drinks and more rounds of endless looking at things, which the girl says is all they ever do, or to a child and life and love and responsibility. One way or another they must decide. The operation will take them into brown, dry country. The child will take them to the white hills, where there will be work and labor but potentially new happiness and life. The train is the insistent reminder that they must decide and must decide now: “The train comes in five minutes,” says the barista (Hemingway 232). There is no time to stall any longer.

This short story, “Hills like White Elephants” is full of symbolism. The white elephant image symbolizes the thing that cannot easily be gotten rid of and that comes with a great cost. The hills represent pregnancy. The arriving train represents decision time. Each are full of significance and meaning, though the taboo subject is never mentioned by name, each symbol reflects the urgency palpable in every word of the story.

Symbolism in “Hills like White Elephants”. (2021, May 20). Retrieved from https://papersowl.com/examples/symbolism-in-hills-like-white-elephants/