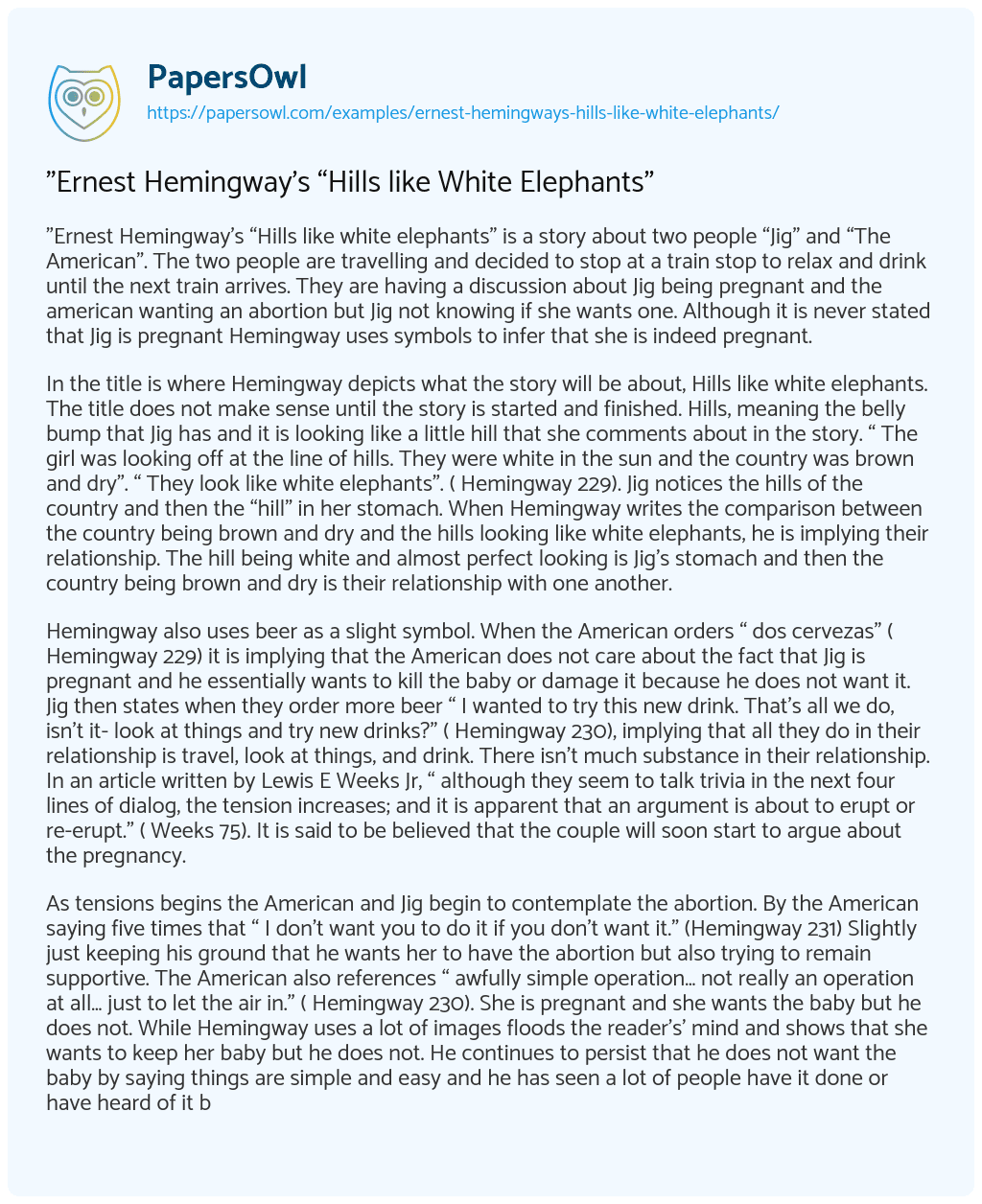 “Ernest Hemingway’s “Hills like white elephants” is a story about two people “Jig” and “The American”. The two people are travelling and decided to stop at a train stop to relax and drink until the next train arrives. They are having a discussion about Jig being pregnant and the american wanting an abortion but Jig not knowing if she wants one. Although it is never stated that Jig is pregnant Hemingway uses symbols to infer that she is indeed pregnant.

In the title is where Hemingway depicts what the story will be about, Hills like white elephants. The title does not make sense until the story is started and finished. Hills, meaning the belly bump that Jig has and it is looking like a little hill that she comments about in the story. “ The girl was looking off at the line of hills. They were white in the sun and the country was brown and dry”. “ They look like white elephants”. ( Hemingway 229). Jig notices the hills of the country and then the “hill” in her stomach. When Hemingway writes the comparison between the country being brown and dry and the hills looking like white elephants, he is implying their relationship. The hill being white and almost perfect looking is Jig’s stomach and then the country being brown and dry is their relationship with one another.

Hemingway also uses beer as a slight symbol. When the American orders “ dos cervezas” ( Hemingway 229) it is implying that the American does not care about the fact that Jig is pregnant and he essentially wants to kill the baby or damage it because he does not want it. Jig then states when they order more beer “ I wanted to try this new drink. That’s all we do, isn’t it- look at things and try new drinks?” ( Hemingway 230), implying that all they do in their relationship is travel, look at things, and drink. There isn’t much substance in their relationship. In an article written by Lewis E Weeks Jr, “ although they seem to talk trivia in the next four lines of dialog, the tension increases; and it is apparent that an argument is about to erupt or re-erupt.” ( Weeks 75). It is said to be believed that the couple will soon start to argue about the pregnancy.

As tensions begins the American and Jig begin to contemplate the abortion. By the American saying five times that “ I don’t want you to do it if you don’t want it.” (Hemingway 231) Slightly just keeping his ground that he wants her to have the abortion but also trying to remain supportive. The American also references “ awfully simple operation… not really an operation at all… just to let the air in.” ( Hemingway 230). She is pregnant and she wants the baby but he does not. While Hemingway uses a lot of images floods the reader’s’ mind and shows that she wants to keep her baby but he does not. He continues to persist that he does not want the baby by saying things are simple and easy and he has seen a lot of people have it done or have heard of it being done before.

While it is not an easy operation and at the time in Spain abortion was illegal and very little Doctors would perform the surgery to have it done. The man also attempts to trivialize the abortion by making it sound simple, but abortion in Spain was not legal at the time. It wasn’t made legal in Spain until 1985, and sometimes women died. Many doctors were not willing to risk their careers on being caught performing illegal abortions. Many times, the only doctors who performed them were doctors who weren’t very good or whose offices were less than sanitary. The man wants Jig to have the abortion, but she looks at the situation realistically. The man might leave her anyway, and she might be physically and psychologically scarred from the abortion, even if nothing goes wrong. Again stated by Wyche “ As the more “grounded” of the two, she knows that the mechanical dilation of the cervix, causing the uterus to spontaneously void itself, followed by curettage, a scraping procedure, is far from “perfectly natural.” Perhaps she is beginning to realize, at this point, that whether or not she terminates her pregnancy, they can never again be “like we were before.” When the American states that her pregnancy is “the only thing that bothers us…the only thing that’s made us unhappy,” she is again silent, thoughtfully fondling two strings of beads from the curtain.” ( wyche, 1) .

When, with the train “coming in five minutes,” the American moves the couple’s bags “to the other side of the station”, some decision has been reached—at least tentatively. We can hypothesize about the nature of the decision, but in light of the numerous plausible scenarios offered by serious readers, we simply cannot know. Jig’s smile might indicate gratitude for his concession , satisfaction that “she has decided to have the abortion” but leave her partner, or, as Renner says of her final insistence, after yet another smile, that “I feel fine” , “just a hint of smug triumph” (Renner 37). Whatever motivates the American to transfer the bags, and whatever causes Jig to smile, we can be certain about the dissolution of the relationship. The American’s looking down the tracks, straining to glimpse a future moving toward him as inexorably as the approaching train, certainly indicates a degree of uneasiness on his part, as does his stopping to have another drink, alone, before returning to Jig.”