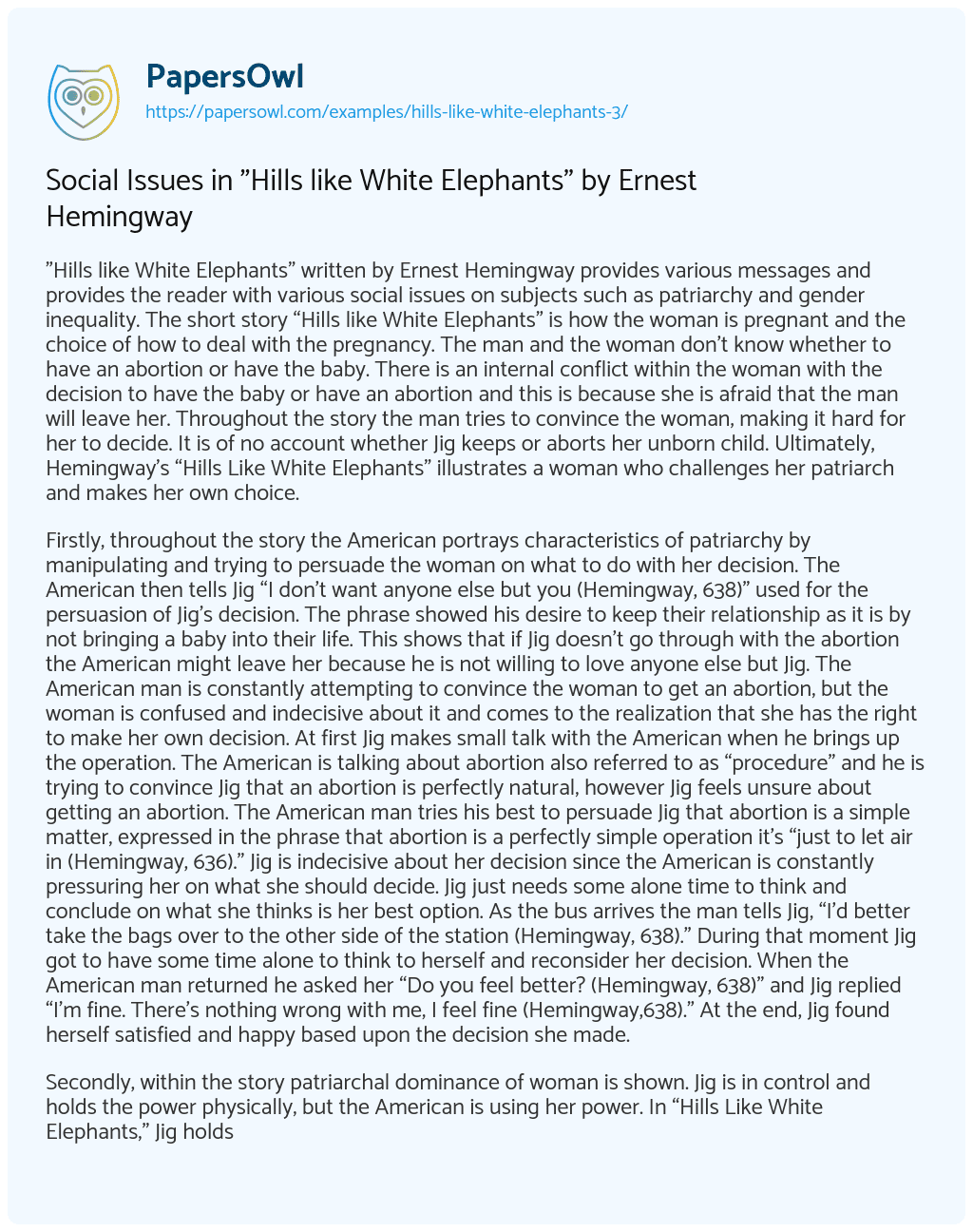 “Hills like White Elephants” written by Ernest Hemingway provides various messages and provides the reader with various social issues on subjects such as patriarchy and gender inequality. The short story “Hills like White Elephants” is how the woman is pregnant and the choice of how to deal with the pregnancy. The man and the woman don’t know whether to have an abortion or have the baby. There is an internal conflict within the woman with the decision to have the baby or have an abortion and this is because she is afraid that the man will leave her. Throughout the story the man tries to convince the woman, making it hard for her to decide. It is of no account whether Jig keeps or aborts her unborn child. Ultimately, Hemingway’s “Hills Like White Elephants” illustrates a woman who challenges her patriarch and makes her own choice.

Firstly, throughout the story the American portrays characteristics of patriarchy by manipulating and trying to persuade the woman on what to do with her decision. The American then tells Jig “I don’t want anyone else but you (Hemingway, 638)” used for the persuasion of Jig’s decision. The phrase showed his desire to keep their relationship as it is by not bringing a baby into their life. This shows that if Jig doesn’t go through with the abortion the American might leave her because he is not willing to love anyone else but Jig. The American man is constantly attempting to convince the woman to get an abortion, but the woman is confused and indecisive about it and comes to the realization that she has the right to make her own decision. At first Jig makes small talk with the American when he brings up the operation. The American is talking about abortion also referred to as “procedure” and he is trying to convince Jig that an abortion is perfectly natural, however Jig feels unsure about getting an abortion. The American man tries his best to persuade Jig that abortion is a simple matter, expressed in the phrase that abortion is a perfectly simple operation it’s “just to let air in (Hemingway, 636).” Jig is indecisive about her decision since the American is constantly pressuring her on what she should decide. Jig just needs some alone time to think and conclude on what she thinks is her best option. As the bus arrives the man tells Jig, “I’d better take the bags over to the other side of the station (Hemingway, 638).” During that moment Jig got to have some time alone to think to herself and reconsider her decision. When the American man returned he asked her “Do you feel better? (Hemingway, 638)” and Jig replied “I’m fine. There’s nothing wrong with me, I feel fine (Hemingway,638).” At the end, Jig found herself satisfied and happy based upon the decision she made.

Secondly, within the story patriarchal dominance of woman is shown. Jig is in control and holds the power physically, but the American is using her power. In “Hills Like White Elephants,” Jig holds the power because she is physically the one carrying the fetus, so she has the final say in keeping or aborting the baby. The American can try to have full control all he wants, but Jig is the one who really has the final say in this decision. Jig uses her power when she and the American are having a conversation about the operation. The American tries to gain control in the situation by constantly bringing up the abortion, while Jig tries to ignore the subject by asking him to not talk about it. She asks him, “Can’t we maybe stop talking (Hemingway, 637)?”. When he then still continues to talk about it, she asks again, “Would you please please please please please please please stop talking (Hemingway, 638)?” This shows how Jig is getting upset and frustrated by the confusion brought by the man, so she demands that the man should stop talking. She defies the term patriarch as she tells him to stop and she realizes that it isn’t his choice to make when it comes to her unborn child. Even after she asks him twice to stop talking, he still continues going on about the abortion, so she finally gains the authority of the situation by threatening the man saying, “I’ll scream (Hemingway, 638)”. Jig threaten to scream in order for the man to stop talking. At this point Jig realized that they are not comfortable conversing over the procedure. This is another instance where Jig acts as a decision maker. Forcing the man to stop talking and threatening him shows a theme of female domination. Instead of listening to the man, she goes against what the American wants, which is for her to have the abortion, but she doesn’t quickly agree with his decision. By standing up for herself and making her own decision shows the power and liberation of women.

Thirdly, a gender role is illustrated throughout the story. The American is a very dominant man in the story, he is trying to make his girlfriend follow his order. He doesn’t care about others opinion and only cares about himself. The main events of the story are what gives us an idea of male domination throughout the story. The American being the protagonist, is able to gain a lot of attention and the main point in the story is based only on what he desires. His main focus is to persuade Jig that she should get an abortion, but she is against this idea, making her seem weak causing her to be the antagonist. She tries hard to make her point, but the man continuously keeps shutting her down. This demonstrates that the actual plot of the story provides us with the idea of male empowerment. The narrator states, “The American and the girl with him sat at the table in the shade, outside the building (Hemingway, 635)”. The fact that the man can be referred to as “the American” and the female as simply, “the girl” and not woman, comes to show this major theme of gender inequality.

In conclusion, Jig’s objection to her patriarch’s input demonstrates her growth as a person and emphasizes the importance of making her own choice, regardless of gender. Jig has the right to do what she pleases with her own body, after all she is the one that will carry the baby in her belly. Jig made her decision and stood up for herself defying patriarchy. Though we may not know the outcome of her decision, she was pleased with it.