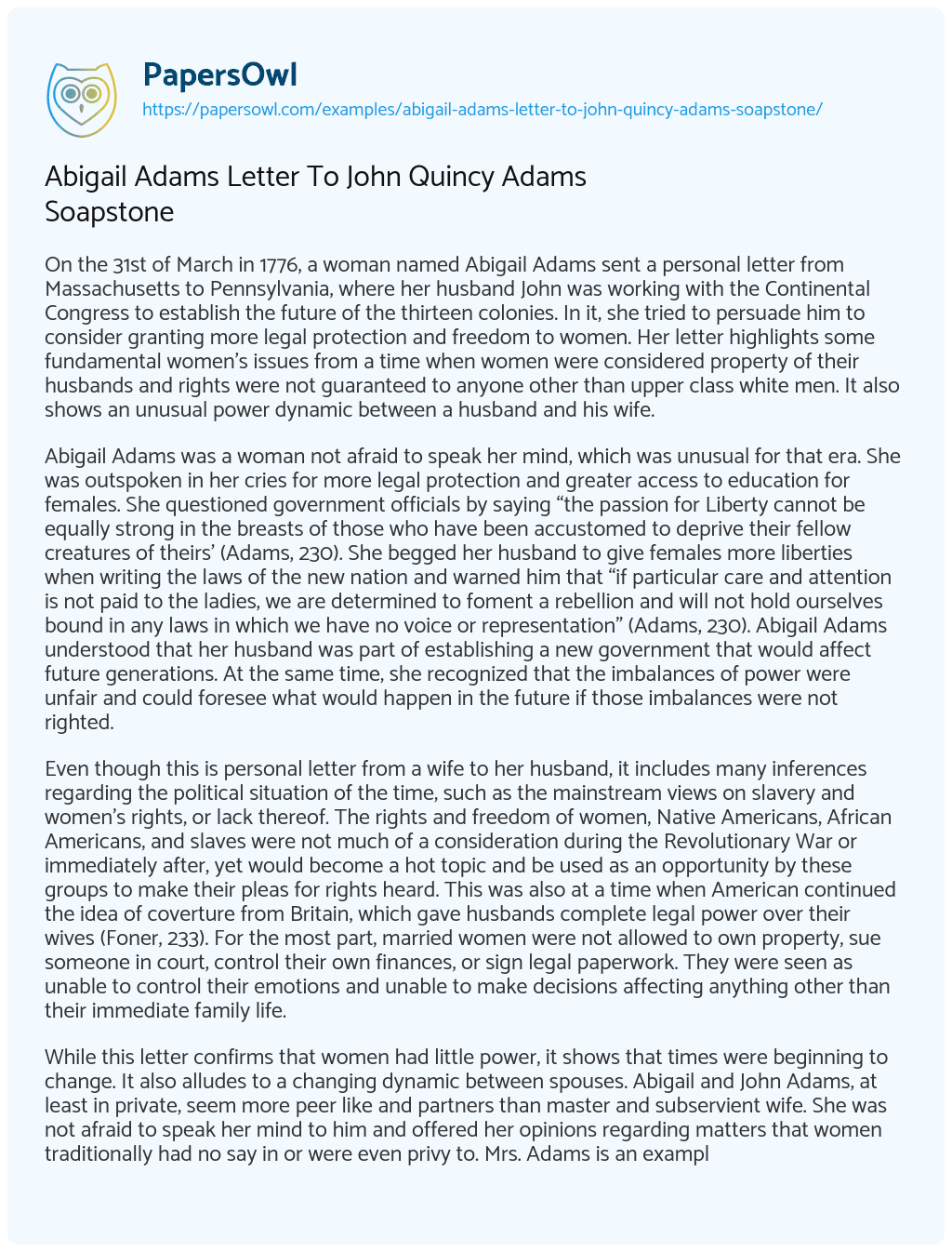 On the 31st of March in 1776, a woman named Abigail Adams sent a personal letter from Massachusetts to Pennsylvania, where her husband John was working with the Continental Congress to establish the future of the thirteen colonies. In it, she tried to persuade him to consider granting more legal protection and freedom to women. Her letter highlights some fundamental women’s issues from a time when women were considered property of their husbands and rights were not guaranteed to anyone other than upper class white men. It also shows an unusual power dynamic between a husband and his wife.

Abigail Adams was a woman not afraid to speak her mind, which was unusual for that era. She was outspoken in her cries for more legal protection and greater access to education for females. She questioned government officials by saying “the passion for Liberty cannot be equally strong in the breasts of those who have been accustomed to deprive their fellow creatures of theirs’ (Adams, 230). She begged her husband to give females more liberties when writing the laws of the new nation and warned him that “if particular care and attention is not paid to the ladies, we are determined to foment a rebellion and will not hold ourselves bound in any laws in which we have no voice or representation” (Adams, 230). Abigail Adams understood that her husband was part of establishing a new government that would affect future generations. At the same time, she recognized that the imbalances of power were unfair and could foresee what would happen in the future if those imbalances were not righted.

Even though this is personal letter from a wife to her husband, it includes many inferences regarding the political situation of the time, such as the mainstream views on slavery and women’s rights, or lack thereof. The rights and freedom of women, Native Americans, African Americans, and slaves were not much of a consideration during the Revolutionary War or immediately after, yet would become a hot topic and be used as an opportunity by these groups to make their pleas for rights heard. This was also at a time when American continued the idea of coverture from Britain, which gave husbands complete legal power over their wives (Foner, 233). For the most part, married women were not allowed to own property, sue someone in court, control their own finances, or sign legal paperwork. They were seen as unable to control their emotions and unable to make decisions affecting anything other than their immediate family life.

While this letter confirms that women had little power, it shows that times were beginning to change. It also alludes to a changing dynamic between spouses. Abigail and John Adams, at least in private, seem more peer like and partners than master and subservient wife. She was not afraid to speak her mind to him and offered her opinions regarding matters that women traditionally had no say in or were even privy to. Mrs. Adams is an example of a woman who loved her husband and considered him an equal. She was content to be a homemaker and a wife, but understood her worth beyond preparing her sons for future political and governmental roles. She was a traditional woman, but knew the damage that would occur if men continued to view their wives as property. Whether in jest or not, her comment concerning a rebellion speaks directly to that. She lived through the revolution where the colonists rose up and fought because of their perceived lack of rights, so to her it may have seemed peculiar that the founding fathers would ignore such large groups of people while standing up a new government.

Despite this note being a historical document, it is still a personal letter and only allows the reader to see one person’s personal viewpoint. It also shows showcases stereotypes and broad generalizations about men and their alleged inability to control themselves. Mrs. Adams warned her husband to not allow men to hold total power because, as she says, “all men would be tyrants if they could” and calls the male sex “naturally tyrannical” (Adams, 230). Ironically, she was asking her husband to make the argument against women’s stereotypes while doing just that while speaking of men. This is hardly an unbiased historical source, but rather an opinion of a woman likely fed up with mistreatment.

Abigail Adams’ letter to her husband John Adams is a peek into the personal life of a wife and her husband during a time of enormous transition. It is not a neutral historical document that has been reviewed and edited numerous times, but a natural communication between two partners seeming to reveal a private relationship that may have been more equal than what was normal for the time period and shows that what is presented as fact in public may not have been the norm in private. It also shows that change, including that of the mindset of women’s rights, were not necessarily as drastic and immediate as they might appear, but instead the culmination of hundreds of years of adjustment. In order to gain a complete and accurate depiction of this time in history, one would need access to the local and federal laws of the time, as well as insight into the opinions and relationships between married women and their husbands. It is difficult to determine whether the majority of women in the colonial states were asking for the same rights as she, and whether their husbands privately agreed that they should be granted more freedoms or not. Whether or not this letter is an accurate depiction of the opinions and private lives of couples or the founding fathers themselves, it is still a fascinating glimpse into the lives of colonial America.