Control and Feminism in the Yellow Wallpaper 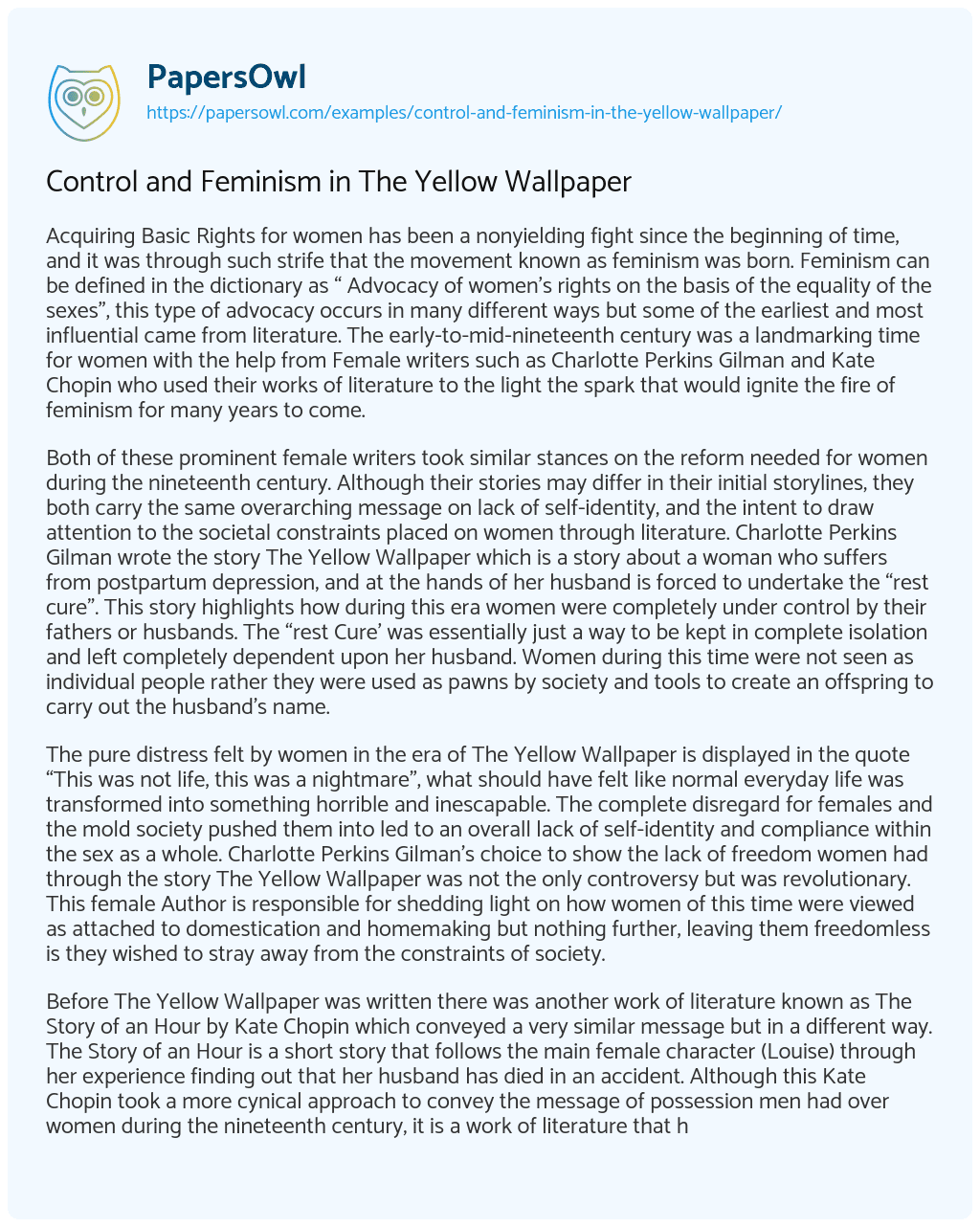 Acquiring Basic Rights for women has been a nonyielding fight since the beginning of time, and it was through such strife that the movement known as feminism was born. Feminism can be defined in the dictionary as “ Advocacy of women’s rights on the basis of the equality of the sexes”, this type of advocacy occurs in many different ways but some of the earliest and most influential came from literature. The early-to-mid-nineteenth century was a landmarking time for women with the help from Female writers such as Charlotte Perkins Gilman and Kate Chopin who used their works of literature to the light the spark that would ignite the fire of feminism for many years to come.

Both of these prominent female writers took similar stances on the reform needed for women during the nineteenth century. Although their stories may differ in their initial storylines, they both carry the same overarching message on lack of self-identity, and the intent to draw attention to the societal constraints placed on women through literature. Charlotte Perkins Gilman wrote the story The Yellow Wallpaper which is a story about a woman who suffers from postpartum depression, and at the hands of her husband is forced to undertake the “rest cure”. This story highlights how during this era women were completely under control by their fathers or husbands. The “rest Cure’ was essentially just a way to be kept in complete isolation and left completely dependent upon her husband. Women during this time were not seen as individual people rather they were used as pawns by society and tools to create an offspring to carry out the husband’s name.

The pure distress felt by women in the era of The Yellow Wallpaper is displayed in the quote “This was not life, this was a nightmare”, what should have felt like normal everyday life was transformed into something horrible and inescapable. The complete disregard for females and the mold society pushed them into led to an overall lack of self-identity and compliance within the sex as a whole. Charlotte Perkins Gilman’s choice to show the lack of freedom women had through the story The Yellow Wallpaper was not the only controversy but was revolutionary. This female Author is responsible for shedding light on how women of this time were viewed as attached to domestication and homemaking but nothing further, leaving them freedomless is they wished to stray away from the constraints of society.

Before The Yellow Wallpaper was written there was another work of literature known as The Story of an Hour by Kate Chopin which conveyed a very similar message but in a different way. The Story of an Hour is a short story that follows the main female character (Louise) through her experience finding out that her husband has died in an accident. Although this Kate Chopin took a more cynical approach to convey the message of possession men had over women during the nineteenth century, it is a work of literature that hits home with many of the social issues women faced, and continue to face. The most memorable and impactful aspect of Kate Chopin’s work is the emotional and chaotic journey it takes the reader on that mirrors the turmoil the women of the era faced on a day to day basis. The overwhelming sense of confinement is shown in the quote “A little-whispered word escaped her slightly parted lips. She said it over and over under her breath: ‘free, free, free!”. This highlights the denial to self-expression Louise even instilled in herself cared to fully speak up for herself in both the literal and metaphorical sense. This work of literature was both a cautionary tale and a visionary tale for feminism all hidden within a story of cynical humor.

The true strife faced by the women’s suffrage movement in the nineteenth century was displayed through Kate Chopin’s Character’s death that shortly followed the death of her husband. Although the character Louise’s husband death finally meant she would finally receive freedom she promptly died after, mirroring how although women in this era may escape the confinement from their marriage, they will not be free within society. The works of literature The Yellow Wallpaper and The Story of an Hour are both responsible for having a monumental impact on the women’s suffrage movement as well as making strides in literature inspiring many females to pursue self-expression through writing. Both short stories were written by females and had a main female protagonist. Although the stories differed in there plot one dealing with the loss of freedom through the “rest cure”, and the other dealing with new found freedom from death, both stories contain the overarching theme of confinement and loss of self-identity. The similarity of the stories even goes into the lives of the authors themselves that is reflecting into their writings.

The stories were written and took place in the nineteen hundreds which were very hard times for women when it came to the lack of representation for females in society. These stories displayed the social issues in the real world through the cynical storytelling, revealing the darker side to what everyday life was like for women during this era. The most striking similarities between Charlotte perkin Gilman’s story The Yellow Wallpaper, and Kate Chopin’s Story of an Hour is the message of female oppression they delivered, and the impact their literature had feminism, translating into the present day. Feminism as we know it today has been shaped and formed by the women in the past who use their Literature to take a stand and reclaim their own voice.

Control and Feminism in The Yellow Wallpaper. (2022, Feb 10). Retrieved from https://papersowl.com/examples/control-and-feminism-in-the-yellow-wallpaper/

Feminism in the Yellow Wallpaper and the Story of an Hour