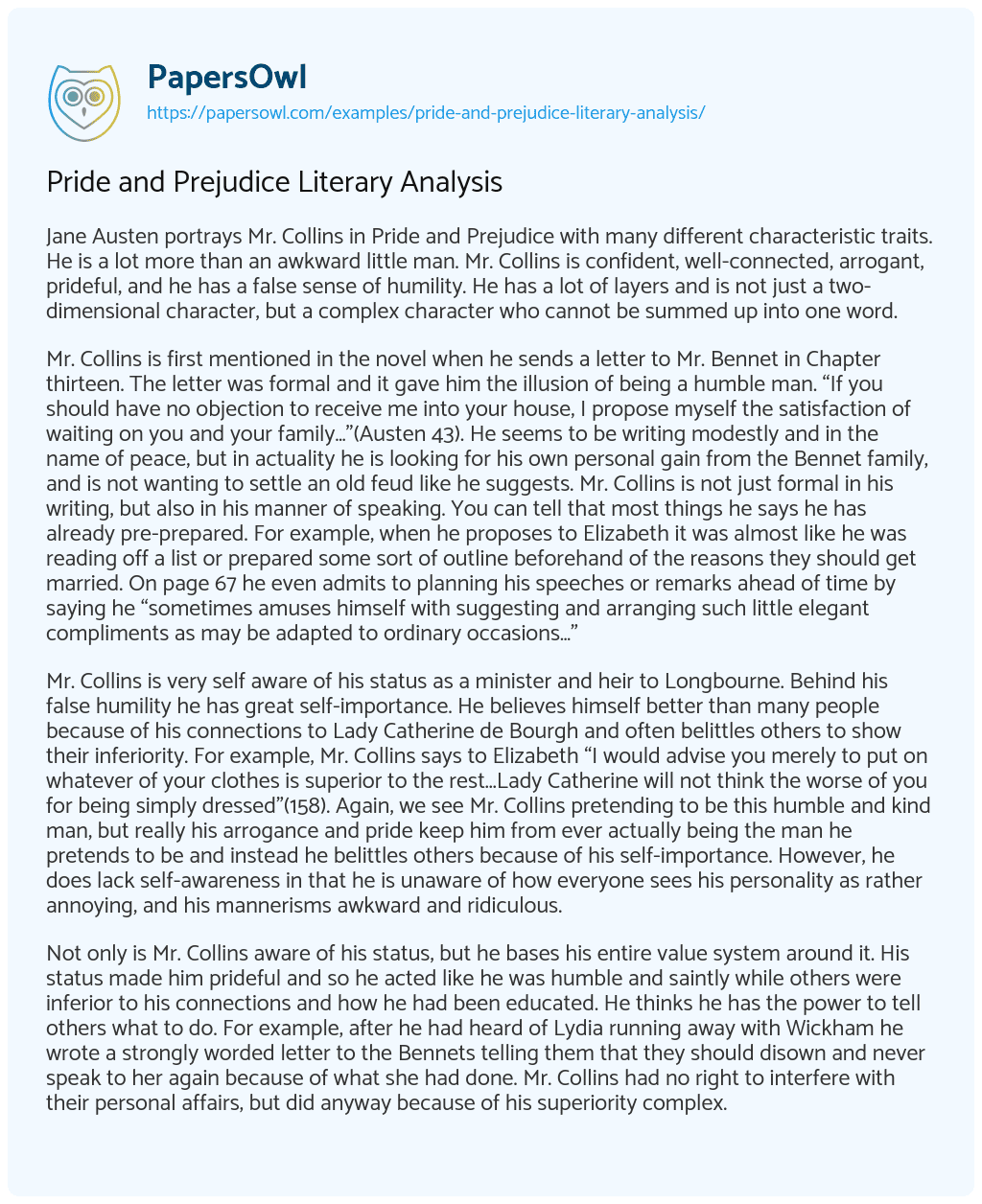 Jane Austen portrays Mr. Collins in Pride and Prejudice with many different characteristic traits. He is a lot more than an awkward little man. Mr. Collins is confident, well-connected, arrogant, prideful, and he has a false sense of humility. He has a lot of layers and is not just a two-dimensional character, but a complex character who cannot be summed up into one word.

Mr. Collins is first mentioned in the novel when he sends a letter to Mr. Bennet in Chapter thirteen. The letter was formal and it gave him the illusion of being a humble man. “If you should have no objection to receive me into your house, I propose myself the satisfaction of waiting on you and your family…”(Austen 43). He seems to be writing modestly and in the name of peace, but in actuality he is looking for his own personal gain from the Bennet family, and is not wanting to settle an old feud like he suggests. Mr. Collins is not just formal in his writing, but also in his manner of speaking. You can tell that most things he says he has already pre-prepared. For example, when he proposes to Elizabeth it was almost like he was reading off a list or prepared some sort of outline beforehand of the reasons they should get married. On page 67 he even admits to planning his speeches or remarks ahead of time by saying he “sometimes amuses himself with suggesting and arranging such little elegant compliments as may be adapted to ordinary occasions…”

Mr. Collins is very self aware of his status as a minister and heir to Longbourne. Behind his false humility he has great self-importance. He believes himself better than many people because of his connections to Lady Catherine de Bourgh and often belittles others to show their inferiority. For example, Mr. Collins says to Elizabeth “I would advise you merely to put on whatever of your clothes is superior to the rest…Lady Catherine will not think the worse of you for being simply dressed”(158). Again, we see Mr. Collins pretending to be this humble and kind man, but really his arrogance and pride keep him from ever actually being the man he pretends to be and instead he belittles others because of his self-importance. However, he does lack self-awareness in that he is unaware of how everyone sees his personality as rather annoying, and his mannerisms awkward and ridiculous.

Not only is Mr. Collins aware of his status, but he bases his entire value system around it. His status made him prideful and so he acted like he was humble and saintly while others were inferior to his connections and how he had been educated. He thinks he has the power to tell others what to do. For example, after he had heard of Lydia running away with Wickham he wrote a strongly worded letter to the Bennets telling them that they should disown and never speak to her again because of what she had done. Mr. Collins had no right to interfere with their personal affairs, but did anyway because of his superiority complex.

Even in Jane Austen’s more minor characters she showed the depth of a human person. Mr. Collins cannot just be summed up with one word. He has depth. The readers first see him as a formal and humble man, but as the novel progresses he is seen as a conceited man living behind the facade of a humble man. He is aware of his status and lords it over people, but does it in a sneaky way. He is unaware of his awkwardness and annoying manners because he finds himself very proper. Mr. Collins is like a lot of people today, but in an exaggerated way. Many people tend to pretend like they are better than what they are and try to put on an act. However, people are not always what they seem and sooner or later the mask they hide behind is taken off. Mr. Collins was more than just one thing. He developed more as the readers got to know his character and discover his many positive and negative qualities