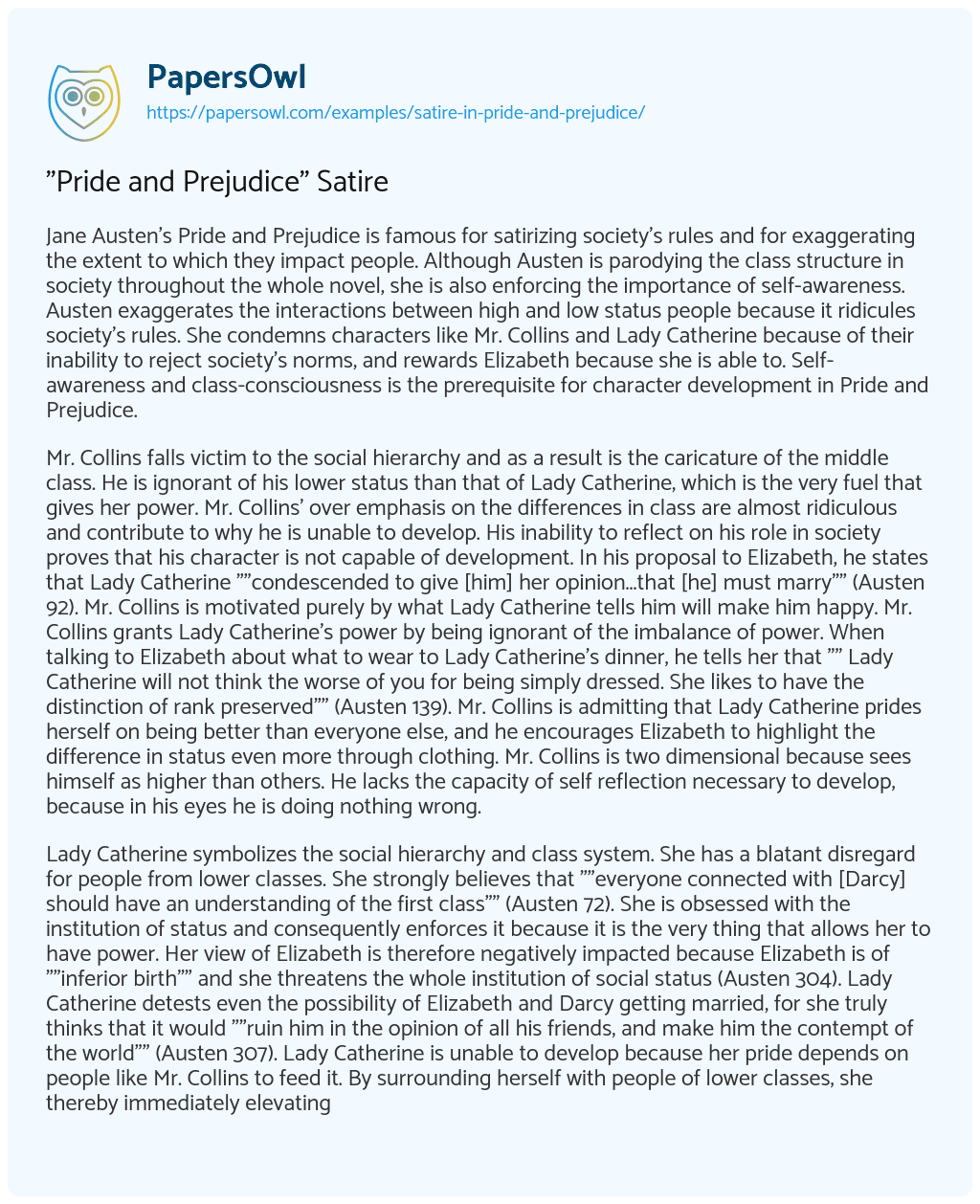 Jane Austen’s Pride and Prejudice is famous for satirizing society’s rules and for exaggerating the extent to which they impact people. Although Austen is parodying the class structure in society throughout the whole novel, she is also enforcing the importance of self-awareness. Austen exaggerates the interactions between high and low status people because it ridicules society’s rules. She condemns characters like Mr. Collins and Lady Catherine because of their inability to reject society’s norms, and rewards Elizabeth because she is able to. Self-awareness and class-consciousness is the prerequisite for character development in Pride and Prejudice.

Mr. Collins falls victim to the social hierarchy and as a result is the caricature of the middle class. He is ignorant of his lower status than that of Lady Catherine, which is the very fuel that gives her power. Mr. Collins’ over emphasis on the differences in class are almost ridiculous and contribute to why he is unable to develop. His inability to reflect on his role in society proves that his character is not capable of development. In his proposal to Elizabeth, he states that Lady Catherine “”condescended to give [him] her opinion…that [he] must marry”” (Austen 92). Mr. Collins is motivated purely by what Lady Catherine tells him will make him happy. Mr. Collins grants Lady Catherine’s power by being ignorant of the imbalance of power. When talking to Elizabeth about what to wear to Lady Catherine’s dinner, he tells her that “” Lady Catherine will not think the worse of you for being simply dressed. She likes to have the distinction of rank preserved”” (Austen 139). Mr. Collins is admitting that Lady Catherine prides herself on being better than everyone else, and he encourages Elizabeth to highlight the difference in status even more through clothing. Mr. Collins is two dimensional because sees himself as higher than others. He lacks the capacity of self reflection necessary to develop, because in his eyes he is doing nothing wrong.

Lady Catherine symbolizes the social hierarchy and class system. She has a blatant disregard for people from lower classes. She strongly believes that “”everyone connected with [Darcy] should have an understanding of the first class”” (Austen 72). She is obsessed with the institution of status and consequently enforces it because it is the very thing that allows her to have power. Her view of Elizabeth is therefore negatively impacted because Elizabeth is of “”inferior birth”” and she threatens the whole institution of social status (Austen 304). Lady Catherine detests even the possibility of Elizabeth and Darcy getting married, for she truly thinks that it would “”ruin him in the opinion of all his friends, and make him the contempt of the world”” (Austen 307). Lady Catherine is unable to develop because her pride depends on people like Mr. Collins to feed it. By surrounding herself with people of lower classes, she thereby immediately elevating her own status. She neglects to acknowledge that she depends on lower status people, and as a result she is unable to develop, because she cannot admit that she is guilty of it. The confrontation between Elizabeth and Lady Catherine, who symbolizes the social class institution, raises the question about the extent to which one should follow society’s rules. Elizabeth rebels by saying “”she will constitute [her own] happiness, without reference to you, or to any person so wholly unconnected with [her]”” (Austen 307). Elizabeth prioritizes her own happiness and thereby chooses to disobey the norms by not agreeing to Lady Catherine’s terms.

In the beginning of the novel, Elizabeth places very little value on social status. Upon meeting Darcy her idea of status changes. She immediately is disgusted by his “”arrogance, conceit, and selfish disdain for the feelings of others””, and comes to the conclusion that it is because he is of a higher social status (Austen 166). However Elizabeth’s development is catalyzed when she realized that her preconception of Darcy was wrong. She is so “”ashamed”” of herself and states “”how despicably have I acted…How humiliating is this discovery…Till this moment I never knew myself”” (Austen 179). Elizabeth’s newfound self-awareness, after she learned that she can be wrong, ultimately leads to her maturation. Her ability to self reflect distinguishes the difference between her and Mr. Collins and Lady Catherine. Elizabeth realizes that she isn’t right about everything and not to judge too quickly. Her acceptance of the truth makes her determined to change and become a better person, thus meaning development is inevitable for her. This in great contrast with Mr. Collins and Lady Catherine, because they are unable to self-reflect, and therefore unable to develop.

Self-awareness and class-consciousness is a prerequisite for character development in Pride and Prejudice.

"Pride and Prejudice" Satire. (2020, May 05). Retrieved from https://papersowl.com/examples/satire-in-pride-and-prejudice/

Expressing Feminism in Pride and Prejudice by Jane Austen