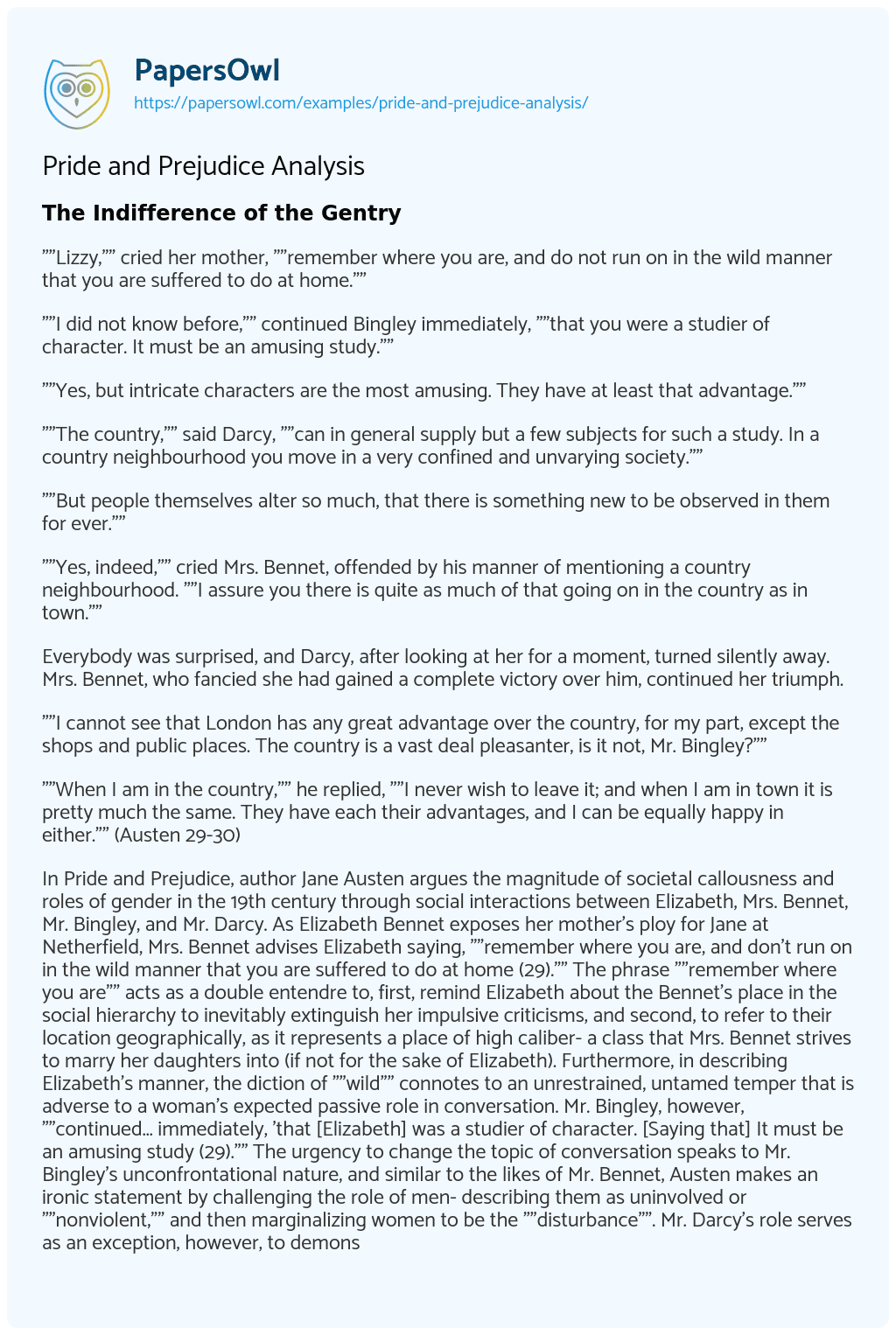 The Indifference of the Gentry

“”Lizzy,”” cried her mother, “”remember where you are, and do not run on in the wild manner that you are suffered to do at home.””

“”I did not know before,”” continued Bingley immediately, “”that you were a studier of character. It must be an amusing study.””

“”Yes, but intricate characters are the most amusing. They have at least that advantage.””

“”The country,”” said Darcy, “”can in general supply but a few subjects for such a study. In a country neighbourhood you move in a very confined and unvarying society.””

“”But people themselves alter so much, that there is something new to be observed in them for ever.””

“”Yes, indeed,”” cried Mrs. Bennet, offended by his manner of mentioning a country neighbourhood. “”I assure you there is quite as much of that going on in the country as in town.””

Everybody was surprised, and Darcy, after looking at her for a moment, turned silently away. Mrs. Bennet, who fancied she had gained a complete victory over him, continued her triumph.

“”I cannot see that London has any great advantage over the country, for my part, except the shops and public places. The country is a vast deal pleasanter, is it not, Mr. Bingley?””

“”When I am in the country,”” he replied, “”I never wish to leave it; and when I am in town it is pretty much the same. They have each their advantages, and I can be equally happy in either.”” (Austen 29-30)

In Pride and Prejudice, author Jane Austen argues the magnitude of societal callousness and roles of gender in the 19th century through social interactions between Elizabeth, Mrs. Bennet, Mr. Bingley, and Mr. Darcy. As Elizabeth Bennet exposes her mother’s ploy for Jane at Netherfield, Mrs. Bennet advises Elizabeth saying, “”remember where you are, and don’t run on in the wild manner that you are suffered to do at home (29).”” The phrase “”remember where you are”” acts as a double entendre to, first, remind Elizabeth about the Bennet’s place in the social hierarchy to inevitably extinguish her impulsive criticisms, and second, to refer to their location geographically, as it represents a place of high caliber- a class that Mrs. Bennet strives to marry her daughters into (if not for the sake of Elizabeth). Furthermore, in describing Elizabeth’s manner, the diction of “”wild”” connotes to an unrestrained, untamed temper that is adverse to a woman’s expected passive role in conversation. Mr. Bingley, however, “”continued… immediately, ‘that [Elizabeth] was a studier of character. [Saying that] It must be an amusing study (29).”” The urgency to change the topic of conversation speaks to Mr. Bingley’s unconfrontational nature, and similar to the likes of Mr. Bennet, Austen makes an ironic statement by challenging the role of men- describing them as uninvolved or “”nonviolent,”” and then marginalizing women to be the “”disturbance””. Mr. Darcy’s role serves as an exception, however, to demonstrate 19th century classism. When addressing education in the country, he says that it “”can in general supply but a few subjects for such a study. In a country neighborhood you move in a very confined and unvarying society.”” Mr. Darcy’s bombastic diction like “”few,”” “”confined”” and “”unvarying”” reveals his sentiments toward the country as a limited and impoverished society, demonstrating the impudent, insolent prejudices the higher class, Mr. Darcy, has for those “”inferior,”” the Bennet’s. Similarly, Mr. Darcy bases importance on the implication that he has a city education, and criticizes those who live and are educated in the country.

“”He really believed, that were it not for the inferiority of her connections, he should be in some danger.”” (Austen 35)

In the novel Pride and Prejudice, Jane Austen discusses themes of financial success and maintenance of stature while searching for true love, revealing the social customs to which Englishmen and women found suitors in the 19th century. When Darcy is initially attracted to Elizabeth, Austen says that if not for her belonging to the middle class, he would be in “”danger.”” Danger, in this sense, refers to the possibility of jeopardizing his family’s reputation with association to hers, and ultimately losing the financial investment he would inherit had he married, for example, Lady Catherine’s niece. Furthermore, Jane is seen with The motif of marriage in the novel is supported with word choices such as “”danger,”” “”anxiety,”” and “”suspicious,”” indicating the venture involved.

-ironic: even though she does not have that high class connection,

-His perception of class is based on wealth and the social circle one belongs to.

The Divergence of Love

In Pride and Prejudice, author Jane Austen argues that the concept of marriage in 19th century England is distorted in the notion that suitability transcends love. Austen communicates the prejudice by creating parallels in marriages such as Elizabeth and Darcy’s and Charlotte and Mr. Collins’. The first line of the novel states, “”It is a truth universally acknowledged, that a single man in possession of a good fortune must be in want of a wife.”” (1). The irony of its overt simplicity foreshadows the conflict that the women pressured to find fortune and the men’s search for suitable wives will both see to these statements with turbulence and complication. The union of Charlotte and Mr. Collins represents the realistic disadvantage of poverty- marrying purely for economic necessity- and desperation. Charlotte expresses the fact that she is “”not romantic”” and “”never was”” and justifies her compliance by saying she asks “”only a comfortable home (89).”” The diction of “”comfortable”” indicates the safety that Mr. Collins’ wealth will provide, and ultimately, reveals that she has no opportunity to pursue someone like Mr. Darcy as a consequence of her plainness. Furthermore, the fact that she is left marrying a man as pompous as Mr. Collins elaborates on the fate of the majority of women- including Austen herself- in an aristocratic society. In contrast, the unlikely pairing of Elizabeth and Mr. Darcy challenge those pretensions of class, as they are able to overcome the very rudiments that Charlotte and Mr. Collins weather. In a letter addressed to Elizabeth, Darcy admits that he has “”been a selfish being all [his] life, in practice, though not in principle (258).”” For an arrogant man such as Mr. Darcy to even begin to acknowledge his faults reveals the magnanimous impact Elizabeth has had on his life, and the examination that his pride is due to upbringing and not morale indicates a possible change in the development of his character. Similarly, Elizabeth begins to question her prejudices after learning what Mr. Darcy had done for Lydia, saying that “”vanity, not love, has been [her] folly… [Having] courted prepossession and ignorance, and driven reason away (145-6).”” The denotation of vanity, according to Mary Bennet, is “”what we would have others think of us (13).”” The effect of this is hypocritical, as Elizabeth criticizes her sisters for their indifference toward Jane, but subsequently imposes the state unto Darcy. However, through admitting this, she, like Darcy, will improve character. Austen offers insight into a fractured society that struggles with apathetic prejudices, but through the marriage of Darcy and Elizabeth, class and social status are proven irrelevant and faults of character are solvable because of true love; while the marriage of Charlotte and Mr. Collins reveals the effects of internalized classism in Victorian society.

Pride and Prejudice Analysis. (2019, May 09). Retrieved from https://papersowl.com/examples/pride-and-prejudice-analysis/