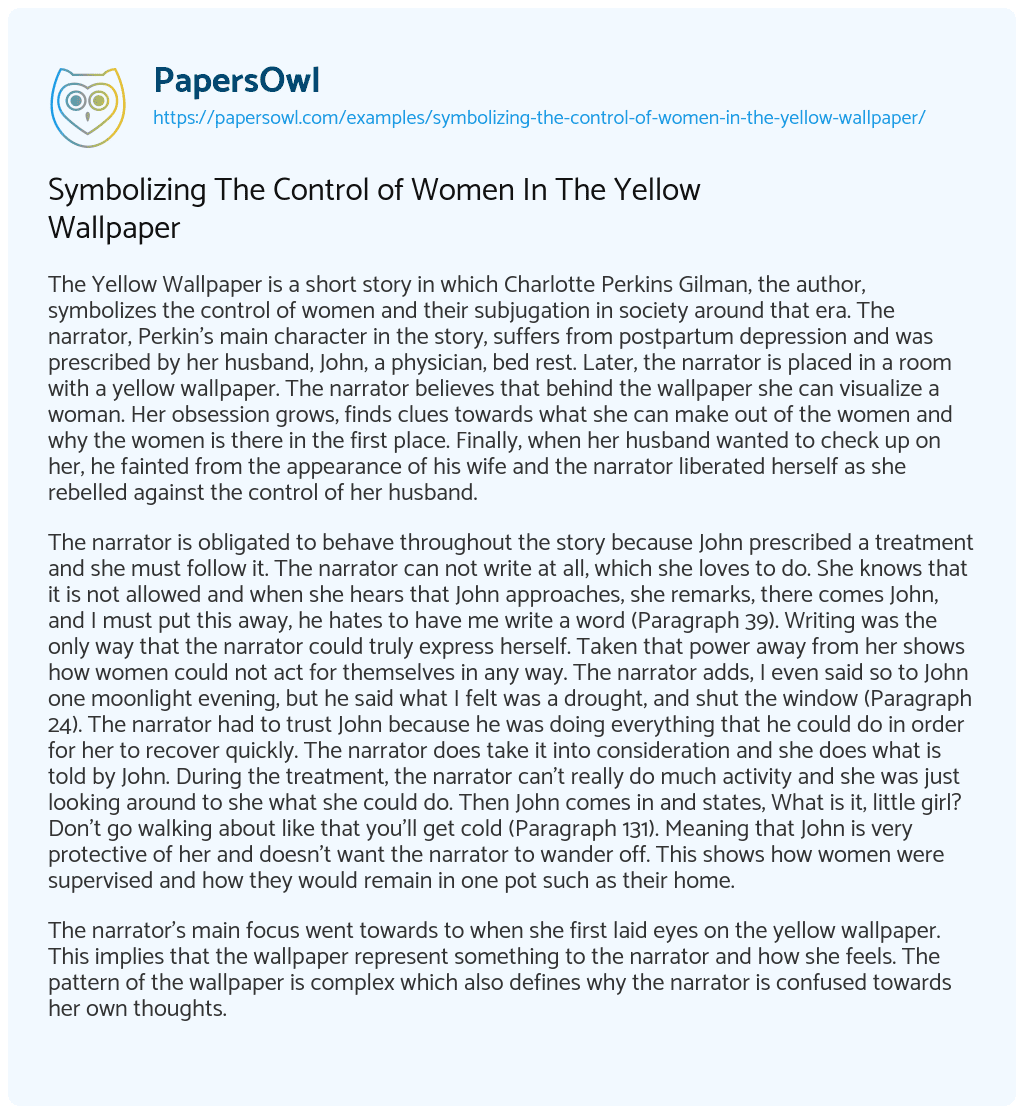 The Yellow Wallpaper is a short story in which Charlotte Perkins Gilman, the author, symbolizes the control of women and their subjugation in society around that era. The narrator, Perkin’s main character in the story, suffers from postpartum depression and was prescribed by her husband, John, a physician, bed rest. Later, the narrator is placed in a room with a yellow wallpaper. The narrator believes that behind the wallpaper she can visualize a woman. Her obsession grows, finds clues towards what she can make out of the women and why the women is there in the first place. Finally, when her husband wanted to check up on her, he fainted from the appearance of his wife and the narrator liberated herself as she rebelled against the control of her husband.

The narrator is obligated to behave throughout the story because John prescribed a treatment and she must follow it. The narrator can not write at all, which she loves to do. She knows that it is not allowed and when she hears that John approaches, she remarks, there comes John, and I must put this away, he hates to have me write a word (Paragraph 39). Writing was the only way that the narrator could truly express herself. Taken that power away from her shows how women could not act for themselves in any way. The narrator adds, I even said so to John one moonlight evening, but he said what I felt was a drought, and shut the window (Paragraph 24). The narrator had to trust John because he was doing everything that he could do in order for her to recover quickly. The narrator does take it into consideration and she does what is told by John. During the treatment, the narrator can’t really do much activity and she was just looking around to she what she could do. Then John comes in and states, What is it, little girl? Don’t go walking about like that you’ll get cold (Paragraph 131). Meaning that John is very protective of her and doesn’t want the narrator to wander off. This shows how women were supervised and how they would remain in one pot such as their home.

The narrator’s main focus went towards to when she first laid eyes on the yellow wallpaper. This implies that the wallpaper represent something to the narrator and how she feels. The pattern of the wallpaper is complex which also defines why the narrator is confused towards her own thoughts.

Symbolizing The Control of Women In The Yellow Wallpaper. (2020, Apr 04). Retrieved from https://papersowl.com/examples/symbolizing-the-control-of-women-in-the-yellow-wallpaper/