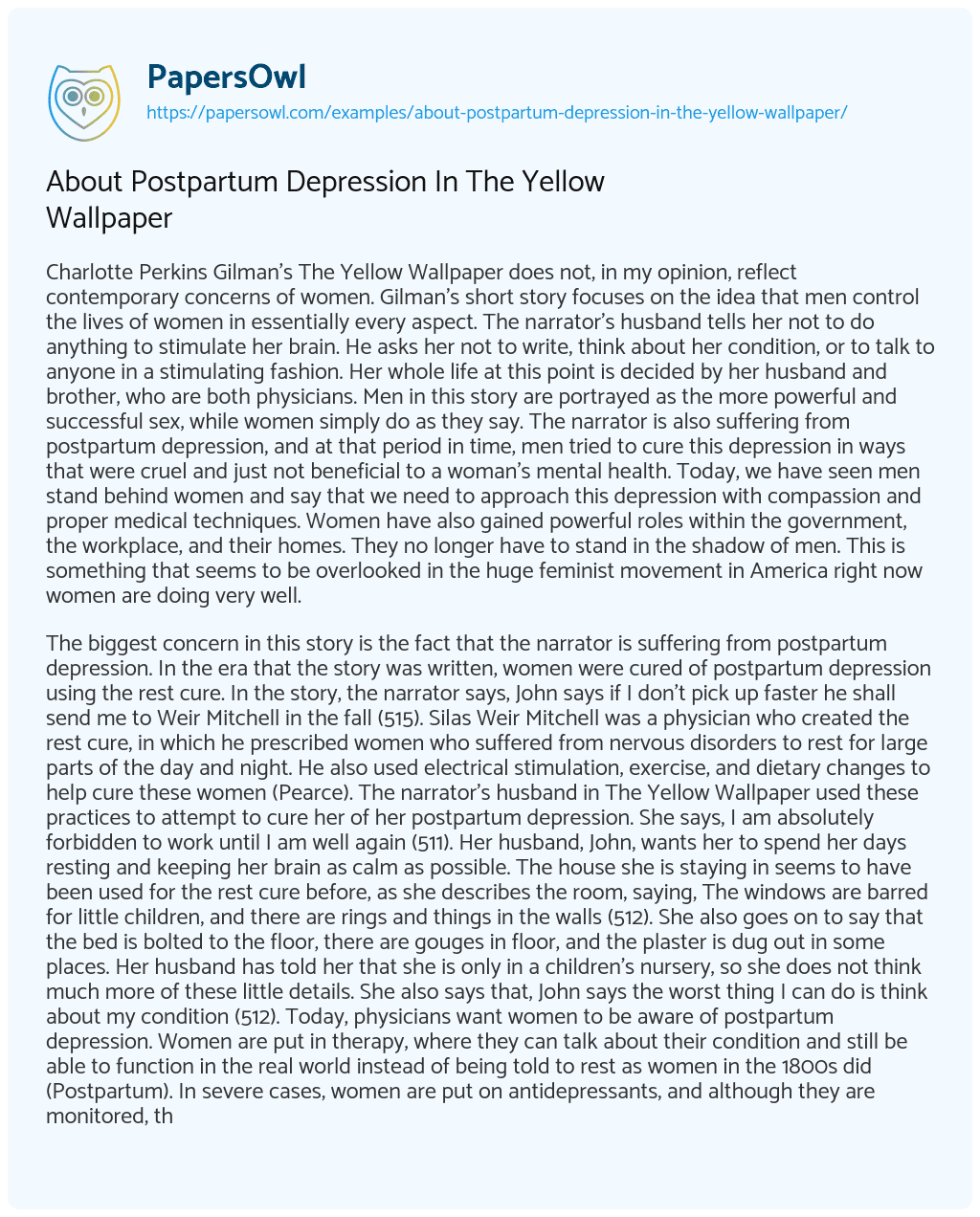 Charlotte Perkins Gilman’s The Yellow Wallpaper does not, in my opinion, reflect contemporary concerns of women. Gilman’s short story focuses on the idea that men control the lives of women in essentially every aspect. The narrator’s husband tells her not to do anything to stimulate her brain. He asks her not to write, think about her condition, or to talk to anyone in a stimulating fashion. Her whole life at this point is decided by her husband and brother, who are both physicians. Men in this story are portrayed as the more powerful and successful sex, while women simply do as they say. The narrator is also suffering from postpartum depression, and at that period in time, men tried to cure this depression in ways that were cruel and just not beneficial to a woman’s mental health. Today, we have seen men stand behind women and say that we need to approach this depression with compassion and proper medical techniques. Women have also gained powerful roles within the government, the workplace, and their homes. They no longer have to stand in the shadow of men. This is something that seems to be overlooked in the huge feminist movement in America right now women are doing very well.

The biggest concern in this story is the fact that the narrator is suffering from postpartum depression. In the era that the story was written, women were cured of postpartum depression using the rest cure. In the story, the narrator says, John says if I don’t pick up faster he shall send me to Weir Mitchell in the fall (515). Silas Weir Mitchell was a physician who created the rest cure, in which he prescribed women who suffered from nervous disorders to rest for large parts of the day and night. He also used electrical stimulation, exercise, and dietary changes to help cure these women (Pearce). The narrator’s husband in The Yellow Wallpaper used these practices to attempt to cure her of her postpartum depression. She says, I am absolutely forbidden to work until I am well again (511). Her husband, John, wants her to spend her days resting and keeping her brain as calm as possible. The house she is staying in seems to have been used for the rest cure before, as she describes the room, saying, The windows are barred for little children, and there are rings and things in the walls (512). She also goes on to say that the bed is bolted to the floor, there are gouges in floor, and the plaster is dug out in some places. Her husband has told her that she is only in a children’s nursery, so she does not think much more of these little details. She also says that, John says the worst thing I can do is think about my condition (512). Today, physicians want women to be aware of postpartum depression. Women are put in therapy, where they can talk about their condition and still be able to function in the real world instead of being told to rest as women in the 1800s did (Postpartum). In severe cases, women are put on antidepressants, and although they are monitored, they are still allowed to do everyday tasks. In this story, women are put through mentally and emotionally draining conditions, but today, they are properly cared for.

The other ideology we see in The Yellow Wallpaper is that men are superior to women. Toward the beginning of the story, the narrator has essentially accepted the fact that her husband has control of her condition, and therefore, her overall mental health and life. She says, If a physician of high standing, and one’s own husband, assures friends and relatives that there is nothing the matter with one but temporary nervous depression a slight hysterical tendency what does one do (511)? It is also important to note that her husband is a physician, as is her brother. Women do not allow men to take charge of their lives anymore. They also are getting degrees and becoming doctors, lawyers, and other amazing things now. This short story was written before women even had the right to vote, so, of course, a man could control every aspect of his wife’s life, and, of course, the men were the physicians, who told women how their mental health could supposedly be fixed. That is not the case anymore. Women have gotten the chance to take control of their own lives. Male superiority is almost a thing of the past now.

As far as the concerns of females go, The Yellow Wallpaper provides a very outdated perspective. Postpartum depression is carefully treated now. Women are able to speak for themselves now without a man controlling them for the most part at least. We have seen women do great things and rise to power in this world. There is no doubt that women have accomplished many things since 1892, when The Yellow Wallpaper was written, so it can no longer speak for women.

About Postpartum Depression In The Yellow Wallpaper. (2020, Mar 03). Retrieved from https://papersowl.com/examples/about-postpartum-depression-in-the-yellow-wallpaper/