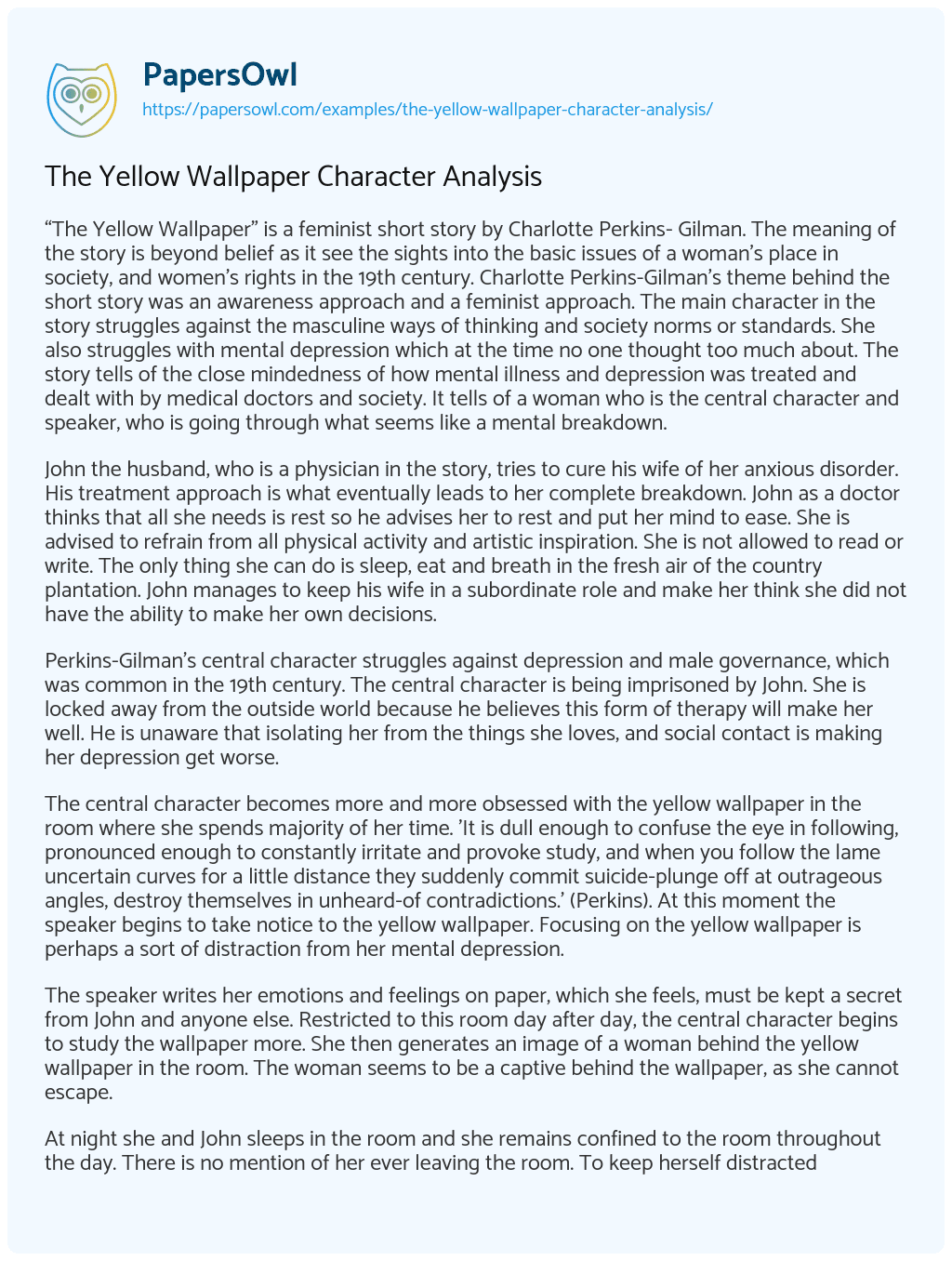 “The Yellow Wallpaper” is a feminist short story by Charlotte Perkins- Gilman. The meaning of the story is beyond belief as it see the sights into the basic issues of a woman’s place in society, and women’s rights in the 19th century. Charlotte Perkins-Gilman’s theme behind the short story was an awareness approach and a feminist approach. The main character in the story struggles against the masculine ways of thinking and society norms or standards. She also struggles with mental depression which at the time no one thought too much about. The story tells of the close mindedness of how mental illness and depression was treated and dealt with by medical doctors and society. It tells of a woman who is the central character and speaker, who is going through what seems like a mental breakdown.

John the husband, who is a physician in the story, tries to cure his wife of her anxious disorder. His treatment approach is what eventually leads to her complete breakdown. John as a doctor thinks that all she needs is rest so he advises her to rest and put her mind to ease. She is advised to refrain from all physical activity and artistic inspiration. She is not allowed to read or write. The only thing she can do is sleep, eat and breath in the fresh air of the country plantation. John manages to keep his wife in a subordinate role and make her think she did not have the ability to make her own decisions.

Perkins-Gilman’s central character struggles against depression and male governance, which was common in the 19th century. The central character is being imprisoned by John. She is locked away from the outside world because he believes this form of therapy will make her well. He is unaware that isolating her from the things she loves, and social contact is making her depression get worse.

The central character becomes more and more obsessed with the yellow wallpaper in the room where she spends majority of her time. ‘It is dull enough to confuse the eye in following, pronounced enough to constantly irritate and provoke study, and when you follow the lame uncertain curves for a little distance they suddenly commit suicide-plunge off at outrageous angles, destroy themselves in unheard-of contradictions.’ (Perkins). At this moment the speaker begins to take notice to the yellow wallpaper. Focusing on the yellow wallpaper is perhaps a sort of distraction from her mental depression.

The speaker writes her emotions and feelings on paper, which she feels, must be kept a secret from John and anyone else. Restricted to this room day after day, the central character begins to study the wallpaper more. She then generates an image of a woman behind the yellow wallpaper in the room. The woman seems to be a captive behind the wallpaper, as she cannot escape.

At night she and John sleeps in the room and she remains confined to the room throughout the day. There is no mention of her ever leaving the room. To keep herself distracted she searches for fine details in the yellow wallpaper. She is captivated with this illusion of the woman being held captive behind the wallpaper. As more days go by she becomes obsessed with this illusion.

She continues to watch this woman behind the yellow wallpaper day in and day out. ‘Through watching so much at night, when it changes so, I have finally found out. The front pattern does move-and no wonder! The woman behind it shakes it! Sometimes I think there are a great many women behind, and sometimes only one, and she crawls around fast, and her crawling shakes it all over.’ (Perkins). She has lost her sense of reality. Perhaps she feels as though what she is imaging is better than her own reality. In her mind the woman is moving around trying to escape, something that she is unable to do. As the story ends the speaker found courage to help the woman get free from the wallpaper.