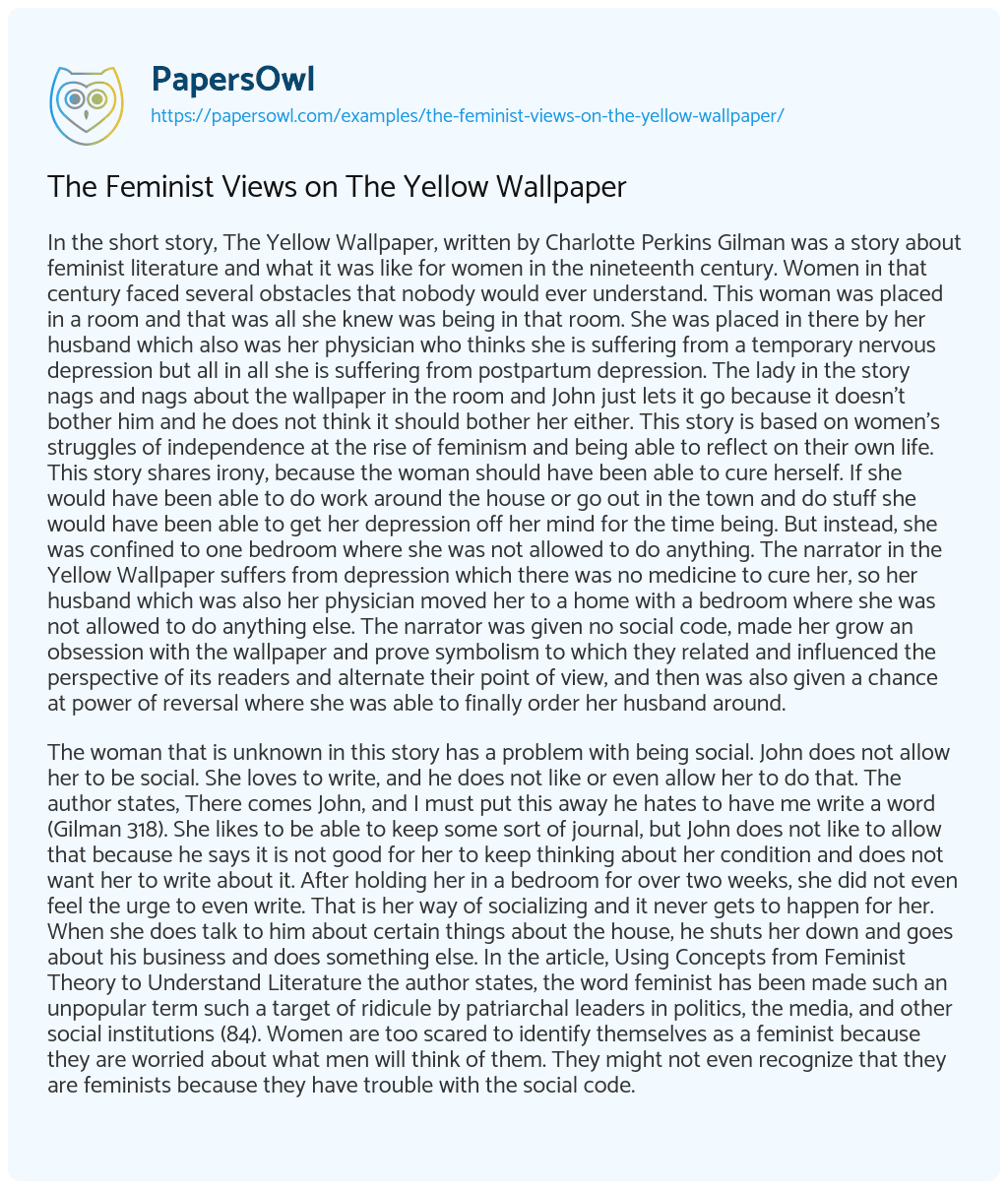 In the short story, The Yellow Wallpaper, written by Charlotte Perkins Gilman was a story about feminist literature and what it was like for women in the nineteenth century. Women in that century faced several obstacles that nobody would ever understand. This woman was placed in a room and that was all she knew was being in that room. She was placed in there by her husband which also was her physician who thinks she is suffering from a temporary nervous depression but all in all she is suffering from postpartum depression. The lady in the story nags and nags about the wallpaper in the room and John just lets it go because it doesn’t bother him and he does not think it should bother her either. This story is based on women’s struggles of independence at the rise of feminism and being able to reflect on their own life. This story shares irony, because the woman should have been able to cure herself. If she would have been able to do work around the house or go out in the town and do stuff she would have been able to get her depression off her mind for the time being. But instead, she was confined to one bedroom where she was not allowed to do anything. The narrator in the Yellow Wallpaper suffers from depression which there was no medicine to cure her, so her husband which was also her physician moved her to a home with a bedroom where she was not allowed to do anything else. The narrator was given no social code, made her grow an obsession with the wallpaper and prove symbolism to which they related and influenced the perspective of its readers and alternate their point of view, and then was also given a chance at power of reversal where she was able to finally order her husband around.

The woman that is unknown in this story has a problem with being social. John does not allow her to be social. She loves to write, and he does not like or even allow her to do that. The author states, There comes John, and I must put this away he hates to have me write a word (Gilman 318). She likes to be able to keep some sort of journal, but John does not like to allow that because he says it is not good for her to keep thinking about her condition and does not want her to write about it. After holding her in a bedroom for over two weeks, she did not even feel the urge to even write. That is her way of socializing and it never gets to happen for her. When she does talk to him about certain things about the house, he shuts her down and goes about his business and does something else. In the article, Using Concepts from Feminist Theory to Understand Literature the author states, the word feminist has been made such an unpopular term such a target of ridicule by patriarchal leaders in politics, the media, and other social institutions (84). Women are too scared to identify themselves as a feminist because they are worried about what men will think of them. They might not even recognize that they are feminists because they have trouble with the social code. There is also such obedience that lays out in this story. She must obey the doctor, her brother but also her husband. In the nineteenth century, women had to obey the men otherwise it was never a good ending for the women because they would never get what they wanted, and they would never get listened to wither.

Also, in The Yellow Wallpaper, there is an example of symbolism to which they are related and can influence the perspective of its readers and alternate their point of view. The narrator gets influenced by her surroundings, so she starts showing signs of mental disorder. This ill lady is obsessed with the wallpaper in the bedroom. She hates it, but she can never stop talking about it. She constantly tells John about it, but he is not worried about it because they are only living in this rented house for 3 months. Gilman said, the paint and the paper look as if a boy’s school had used it. It is stripped off the paper in great patches all around the head of my bed, about as far as I can reach, and in a great place on the other side of the room low down (318). All she talks about is this wallpaper and the less she works the more obsession grows. She does not have anything else to do because John will not allow her to return to work until she is no longer suffering from the depression. So, all she does all day is talk about how horrible this house is and how horrible the color of the wallpaper is. She tries to write certain thoughts down, but she is unsure if she will be able to because John keeps walking into the room and staring down at the paper. She does not want to get caught for writing because she knows she is not allowed to. By having her isolated from the world, she shows growing repression of the wallpaper in the rooms. Her insanity has been taken over by the mental illness and she does not know any better. As she lays awake at night, she sees the moon hitting on the wallpaper and she cannot figure out of the wallpaper is moving. She gets up to try and look and of course John wakes up and tells her not to do that otherwise she is going to get cold. The light from the moon seemed to be moving the wallpaper just when she was wanting out. The moving of the wallpaper really urges her and she cannot stop thinking about it. When someone is suffering from depression-like her and is not allowed to move from the bedroom you will start to become a little crazy and start to have illusions about certain things.

Towards the end of the story, the narrator shows some power reversal. She gets Jeanie, the housekeeper, to stay down stairs for the last night and leave her be. She wanted that because she found a way to get the wallpaper down because she finally realized that the wallpaper was moving and there was some lady behind the bars behind that. She wanted to get to the lady and if she tried to get out she wanted to tie her up. She locked her bedroom door and placed the key by the front door. The narrator said, I pulled, and she shook. I shook, and she pulled, and before morning we had peeled off yards of that paper (326). All she wanted was to take that wallpaper down and she finally was able to in the last couple nights she was staying there. She wanted him to go grab the key, so she could buy herself some time to finish what she was doing. She finally was able to order her husband around once he walked in the door. She broke the social code and was doing something she wanted. She was able to get out of bed and start taking the wallpaper down, which is something she has wanted sense she was placed in that room. I believe that she was finally showing some anger towards Jeanie and also John. She was not just having a breakdown or wanting revenge she is trying to show her capabilities. The narrator was finally able to break through the chains and set herself free. She wanted him to know that she was still a woman and just because she was sick does not mean she can be locked up in the room and never let out. In Chapter 5 of the Using Concepts from Feminist Theory, it stated, for this reason, sexist individuals believe that traditional gender roles which cast men as decision-makers and women as dutiful followers are right and natural because men’s innate superiority dictates that they should be in charge, not only in the family but in business, politics, and all other important social institutions (88). This is allowing for women to come out and be able to strike against all men and so the narrator should be able to strike against John and be able to take care of herself and have rights and allow herself to be free. She should not be locked in a bedroom because that is not allowing her to get better even if John says it is helping her.

The narrator did everything she did out of anger. She wanted to prove to John that she really was sick and that everything she was expie3rcing was real and not fake. John did not want to listen to anything she was saying. After all, he did not even believe that she was suffering from depression. He kept claiming that her illness was just temporary and she would eventually get over it by sitting in this room all alone for so long. John made sure that she did not have any sort of social code towards anyone, making sure that she went crazy and was able to show symbolism and influence the readers, and also she was then able to have a power of reversal towards John.

The Feminist Views on The Yellow Wallpaper. (2019, Mar 27). Retrieved from https://papersowl.com/examples/the-feminist-views-on-the-yellow-wallpaper/