Discrimination has a Role in Humanity 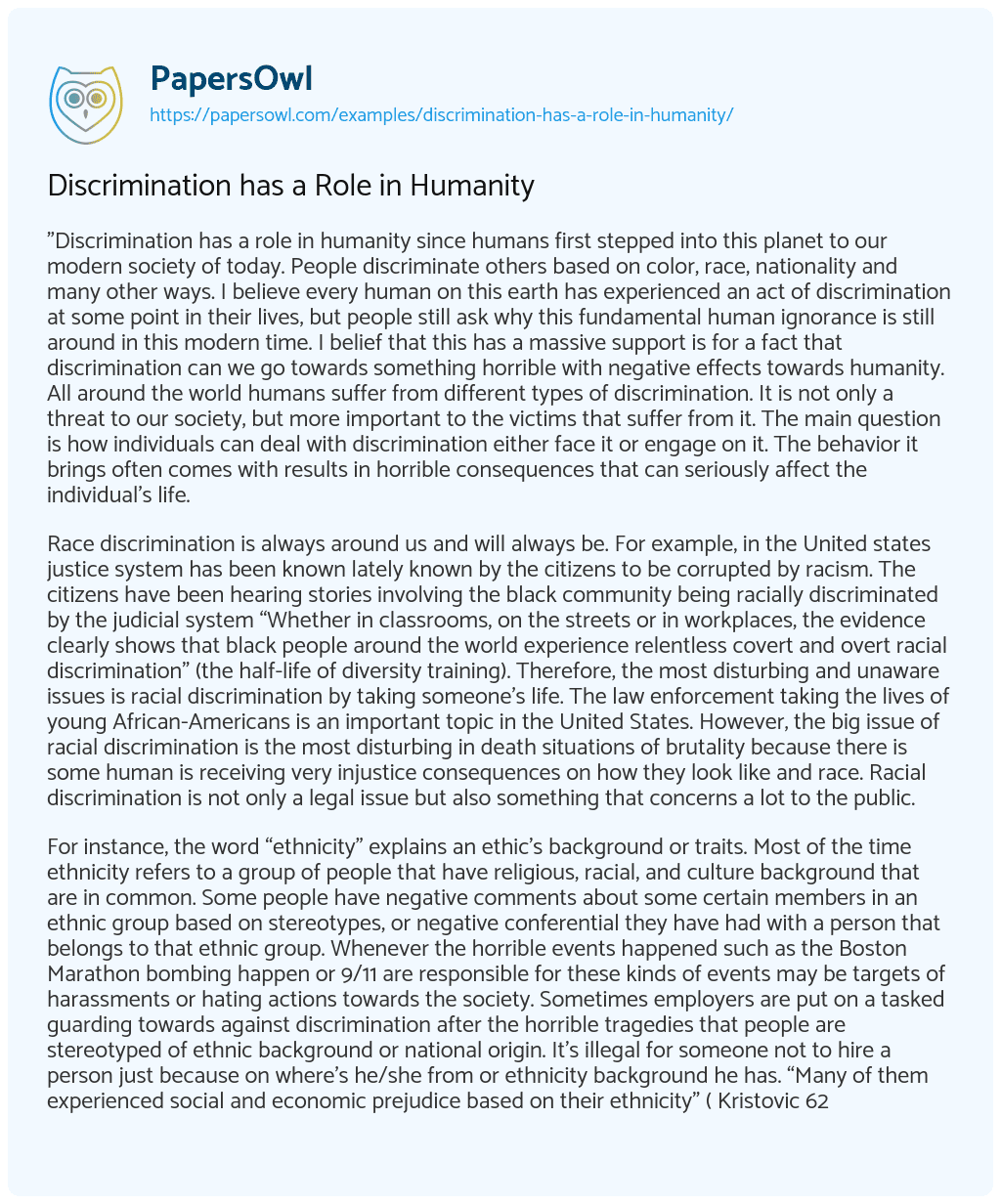 “Discrimination has a role in humanity since humans first stepped into this planet to our modern society of today. People discriminate others based on color, race, nationality and many other ways. I believe every human on this earth has experienced an act of discrimination at some point in their lives, but people still ask why this fundamental human ignorance is still around in this modern time. I belief that this has a massive support is for a fact that discrimination can we go towards something horrible with negative effects towards humanity. All around the world humans suffer from different types of discrimination. It is not only a threat to our society, but more important to the victims that suffer from it. The main question is how individuals can deal with discrimination either face it or engage on it. The behavior it brings often comes with results in horrible consequences that can seriously affect the individual’s life.

Race discrimination is always around us and will always be. For example, in the United states justice system has been known lately known by the citizens to be corrupted by racism. The citizens have been hearing stories involving the black community being racially discriminated by the judicial system “Whether in classrooms, on the streets or in workplaces, the evidence clearly shows that black people around the world experience relentless covert and overt racial discrimination” (the half-life of diversity training). Therefore, the most disturbing and unaware issues is racial discrimination by taking someone’s life. The law enforcement taking the lives of young African-Americans is an important topic in the United States. However, the big issue of racial discrimination is the most disturbing in death situations of brutality because there is some human is receiving very injustice consequences on how they look like and race. Racial discrimination is not only a legal issue but also something that concerns a lot to the public.

For instance, the word “ethnicity” explains an ethic’s background or traits. Most of the time ethnicity refers to a group of people that have religious, racial, and culture background that are in common. Some people have negative comments about some certain members in an ethnic group based on stereotypes, or negative conferential they have had with a person that belongs to that ethnic group. Whenever the horrible events happened such as the Boston Marathon bombing happen or 9/11 are responsible for these kinds of events may be targets of harassments or hating actions towards the society. Sometimes employers are put on a tasked guarding towards against discrimination after the horrible tragedies that people are stereotyped of ethnic background or national origin. It’s illegal for someone not to hire a person just because on where’s he/she from or ethnicity background he has. “Many of them experienced social and economic prejudice based on their ethnicity” ( Kristovic 628).

Whenever you migrate to another country its basically like you’re the new kid in the school. Discrimination is one of the biggest challenges in our society affecting the younger generations. Children sometimes experienced discrimination from their fellow classmates or their teachers. “Many children of migrants and immigrants face discrimination in school. This can take the form of name- calling and bullying from fellow students, but it can also be the result of impatience on the part of teachers at the students; lack of proficiency in the native country& language.” (Krstovic 192). They will go to school having negative attitudes about school, low education motivation, and more likely wanting to drop out of school at a young age. In fact, whenever children face discrimination from their teachers it changes the children’s attitude about their ability to learn and to see how smart they could really be. Sometimes when your fellow students see you different they will harass you by telling you “you don’t belong here” or “to go home” making you feel like you don’t belong there. People shouldn’t be judge on where their coming from or what they represent.

People who judge other people by how they look like you are violating a person’s rights Sometimes it seems like it’s a hard to create an argument to be against discrimination, but sometimes it has a little bit of a good outcome in some situations. Racial profiling is a way of using a person’s ethnicity or race towards the grounds of looking for someone in legal activity. Instead looking for someone by their actions, police officers or citizens will look at a person on how they dress or what race they are suspecting them they have committed a crime. For instance, the president of The United States “Donald Trump” believes that profiling may have a good outcome because some groups that have done something have higher chances of doing them again. One of the many situations that has happened in our modern time is that the law enforcements can stop someone because they suspect a person is up to no good. For example. in some occasions they look for someone who looks Muslim or Arabic because they could try doing a terrorist attack like in the past, and law enforcement could prevent that.

In conclusion, there has and still is discrimination all over the world. Most of the people that think discrimination is okay where raised by people who support those kinds of ideas. We can stop discrimination, but not judging people on how they look. Just because people look different from you doesn’t mean they should be treated any differently. Sometimes you may not agree with someone’s decision and that does not mean that their decision is wrong. Theirs many different lifestyles all over the world and everyone should have the right to be treated equally. Everyone should have the right to live how they want to get treated respectfully and live their happy with happiness without feeling judge every minute.”

Discrimination has a Role in Humanity. (2021, May 10). Retrieved from https://papersowl.com/examples/discrimination-has-a-role-in-humanity/

No Society has been Protected from Discrimination