The Profession of Nursing during World War II 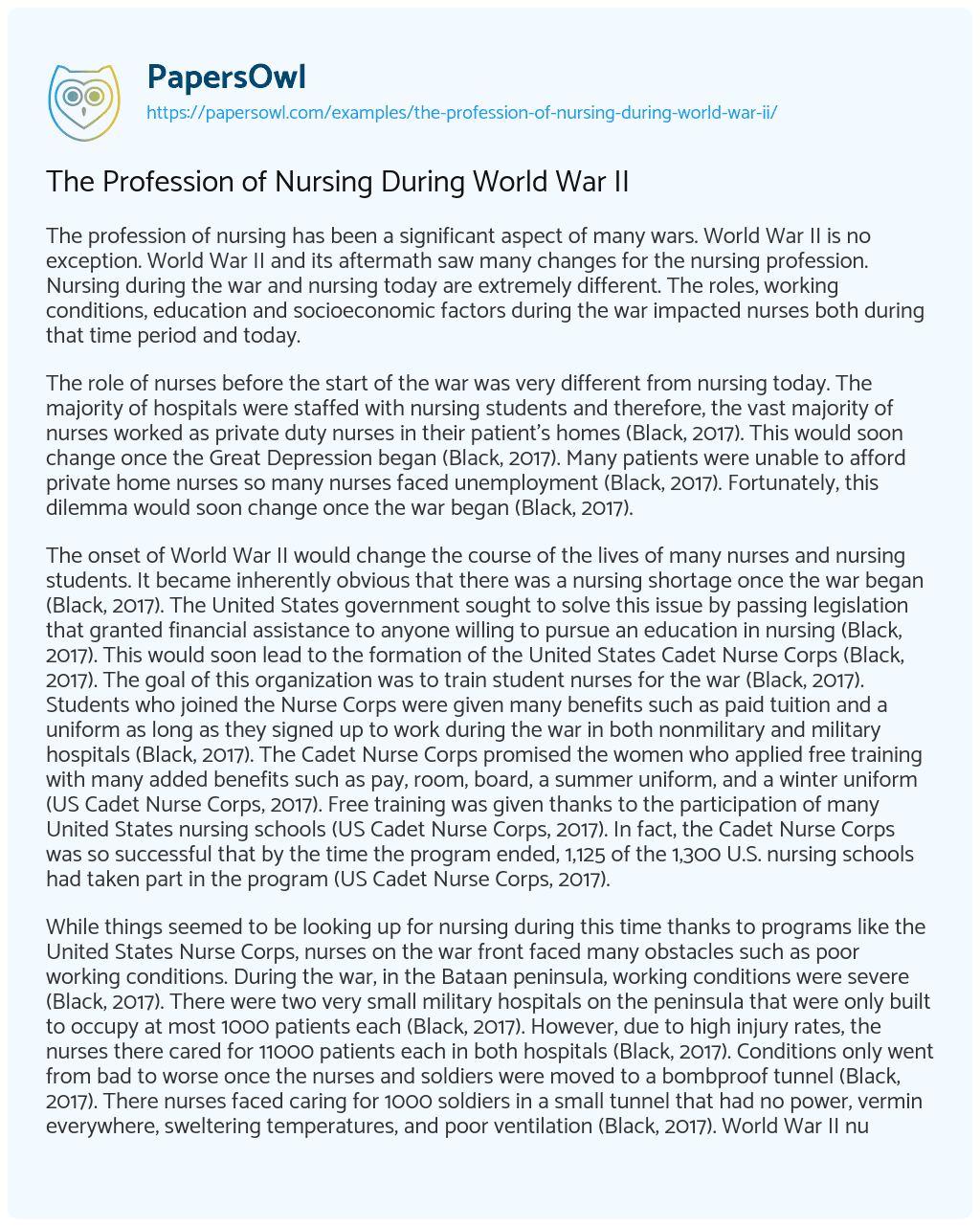 The profession of nursing has been a significant aspect of many wars. World War II is no exception. World War II and its aftermath saw many changes for the nursing profession. Nursing during the war and nursing today are extremely different. The roles, working conditions, education and socioeconomic factors during the war impacted nurses both during that time period and today.

While things seemed to be looking up for nursing during this time thanks to programs like the United States Nurse Corps, nurses on the war front faced many obstacles such as poor working conditions. During the war, in the Bataan peninsula, working conditions were severe (Black, 2017). There were two very small military hospitals on the peninsula that were only built to occupy at most 1000 patients each (Black, 2017). However, due to high injury rates, the nurses there cared for 11000 patients each in both hospitals (Black, 2017). Conditions only went from bad to worse once the nurses and soldiers were moved to a bombproof tunnel (Black, 2017). There nurses faced caring for 1000 soldiers in a small tunnel that had no power, vermin everywhere, sweltering temperatures, and poor ventilation (Black, 2017). World War II nurses continued to care for their patients no matter the obstacle and proved just how resilient they were.

Gender discrimination was a prevalent part of nursing during World War II. Nursing was considered a noncombatant, care giving occupation and was therefore deemed a female occupation (Threat, 2012). Male nurses during the war were forced to question their own masculinity (Threat, 2012). Fortunately, male nurses are much more accepted today (Black, 2017). Even though the ratio of male nurses is still extremely low compared to females, nursing schools now are completely open and welcoming to men (Black, 2017). Organizations like the American Assembly for Men in Nursing have even been formed to encourage and support men in nursing (Black, 2017).

Sadly, male nurses were not the only individuals to face gender discrimination during the war. Since the war was drafting every man able to fight across the ocean, the need for women to run things on the home front was obvious (Quigley, 2016). This realization was met with resistance from individuals who were not ready to see women take control in such an untraditional way (Quigley, 2016). However, the dire need for women to take the men’s place at home quickly outweighed the resistance (Quigley, 2016). This need for new workers was filled first by white women, then minority men, and eventually minority women (WWII home front, 2017). These new opportunities would eventually lead to the desire for equal rights for both women and minorities and would have an impact on the major rights movements that would soon follow in the decades to come (WWII home front, 2017).

Poor working conditions were not the only obstacles faced by America’s new workforce. Since women were now needed to fill many positions that were once occupied by men, childcare became a major concern (WWII home front, 2017). This need would eventually lead to the rise of childcare centers all across America (WWII home front, 2017). This obviously impacted the present as childcare centers are still actively used today.

Nursing during World War II was full of triumphs and obstacles. Nurses proved how vital they were to the war effort. They fought to improve the lives of future nurses once the war ended. World War II nurses fought against racial segregation and poor working conditions. They proved just how resilient and compassionate they were. Women in general proved how resilient and determined they were by striving for independence in the workforce. They proved that they were able to do anything a man could and they let this attitude guide them into the fight for women’s rights. The Second World War had many major impacts on life both during and after the war and those impacts are seen today in nursing and beyond.

The Profession of Nursing During World War II. (2020, May 06). Retrieved from https://papersowl.com/examples/the-profession-of-nursing-during-world-war-ii/

Why Good Nurses Leave the Profession

Nursing is a very Important and Useful Career

What is its Importance Relative to Advance Practice Nursing?