The Scarlet Letter an American Classic 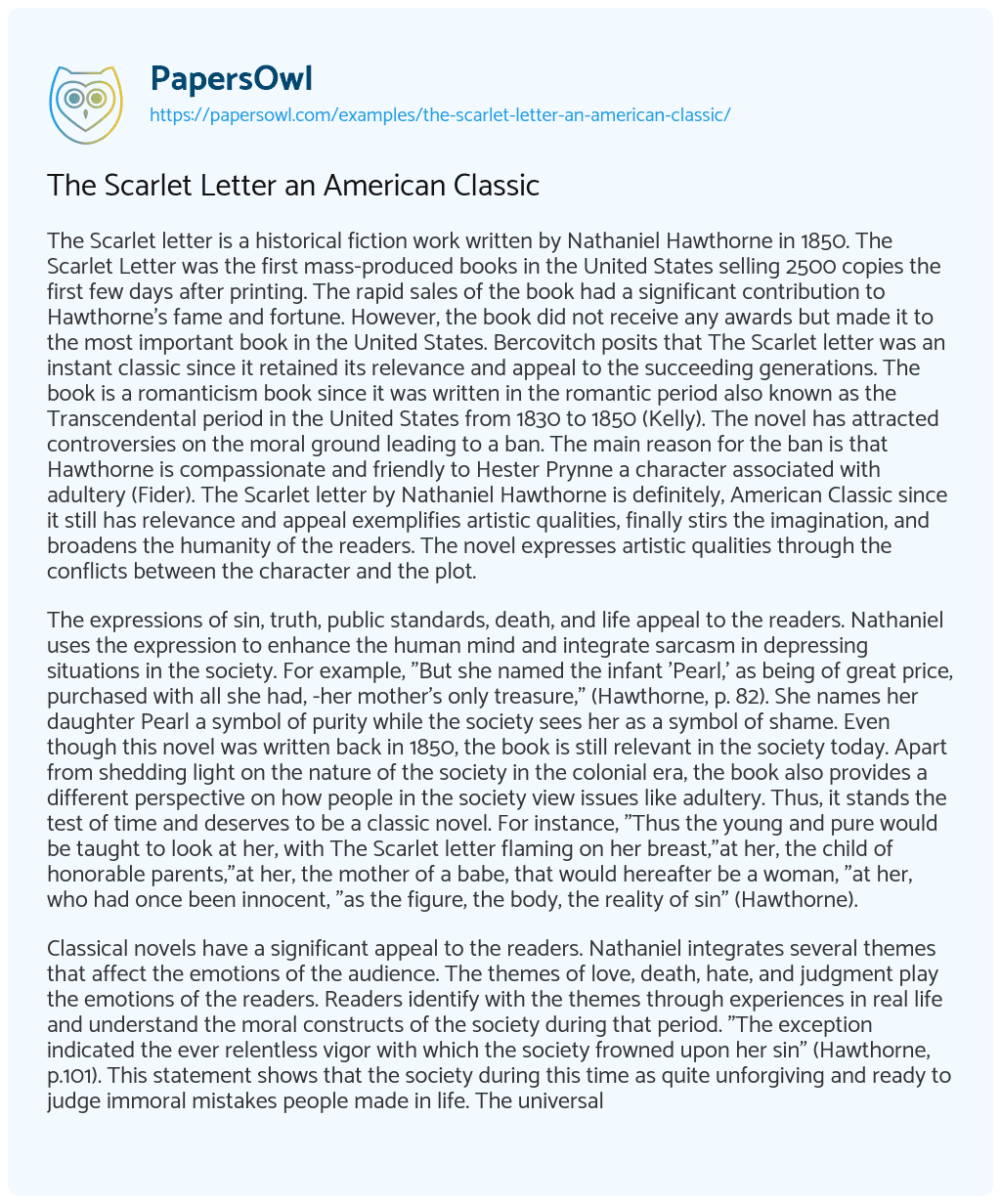 The Scarlet letter is a historical fiction work written by Nathaniel Hawthorne in 1850. The Scarlet Letter was the first mass-produced books in the United States selling 2500 copies the first few days after printing. The rapid sales of the book had a significant contribution to Hawthorne’s fame and fortune. However, the book did not receive any awards but made it to the most important book in the United States. Bercovitch posits that The Scarlet letter was an instant classic since it retained its relevance and appeal to the succeeding generations. The book is a romanticism book since it was written in the romantic period also known as the Transcendental period in the United States from 1830 to 1850 (Kelly). The novel has attracted controversies on the moral ground leading to a ban. The main reason for the ban is that Hawthorne is compassionate and friendly to Hester Prynne a character associated with adultery (Fider). The Scarlet letter by Nathaniel Hawthorne is definitely, American Classic since it still has relevance and appeal exemplifies artistic qualities, finally stirs the imagination, and broadens the humanity of the readers. The novel expresses artistic qualities through the conflicts between the character and the plot.

The expressions of sin, truth, public standards, death, and life appeal to the readers. Nathaniel uses the expression to enhance the human mind and integrate sarcasm in depressing situations in the society. For example, “But she named the infant ‘Pearl,’ as being of great price, purchased with all she had, -her mother’s only treasure,” (Hawthorne, p. 82). She names her daughter Pearl a symbol of purity while the society sees her as a symbol of shame. Even though this novel was written back in 1850, the book is still relevant in the society today. Apart from shedding light on the nature of the society in the colonial era, the book also provides a different perspective on how people in the society view issues like adultery. Thus, it stands the test of time and deserves to be a classic novel. For instance, “Thus the young and pure would be taught to look at her, with The Scarlet letter flaming on her breast,”at her, the child of honorable parents,”at her, the mother of a babe, that would hereafter be a woman, “at her, who had once been innocent, “as the figure, the body, the reality of sin” (Hawthorne).

Classical novels have a significant appeal to the readers. Nathaniel integrates several themes that affect the emotions of the audience. The themes of love, death, hate, and judgment play the emotions of the readers. Readers identify with the themes through experiences in real life and understand the moral constructs of the society during that period. “The exception indicated the ever relentless vigor with which the society frowned upon her sin” (Hawthorne, p.101). This statement shows that the society during this time as quite unforgiving and ready to judge immoral mistakes people made in life. The universal premises make the novel quite relatable.

The Scarlet Letter an American Classic. (2020, Mar 26). Retrieved from https://papersowl.com/examples/the-scarlet-letter-an-american-classic/

Hester Prynne in the Scarlet Letter