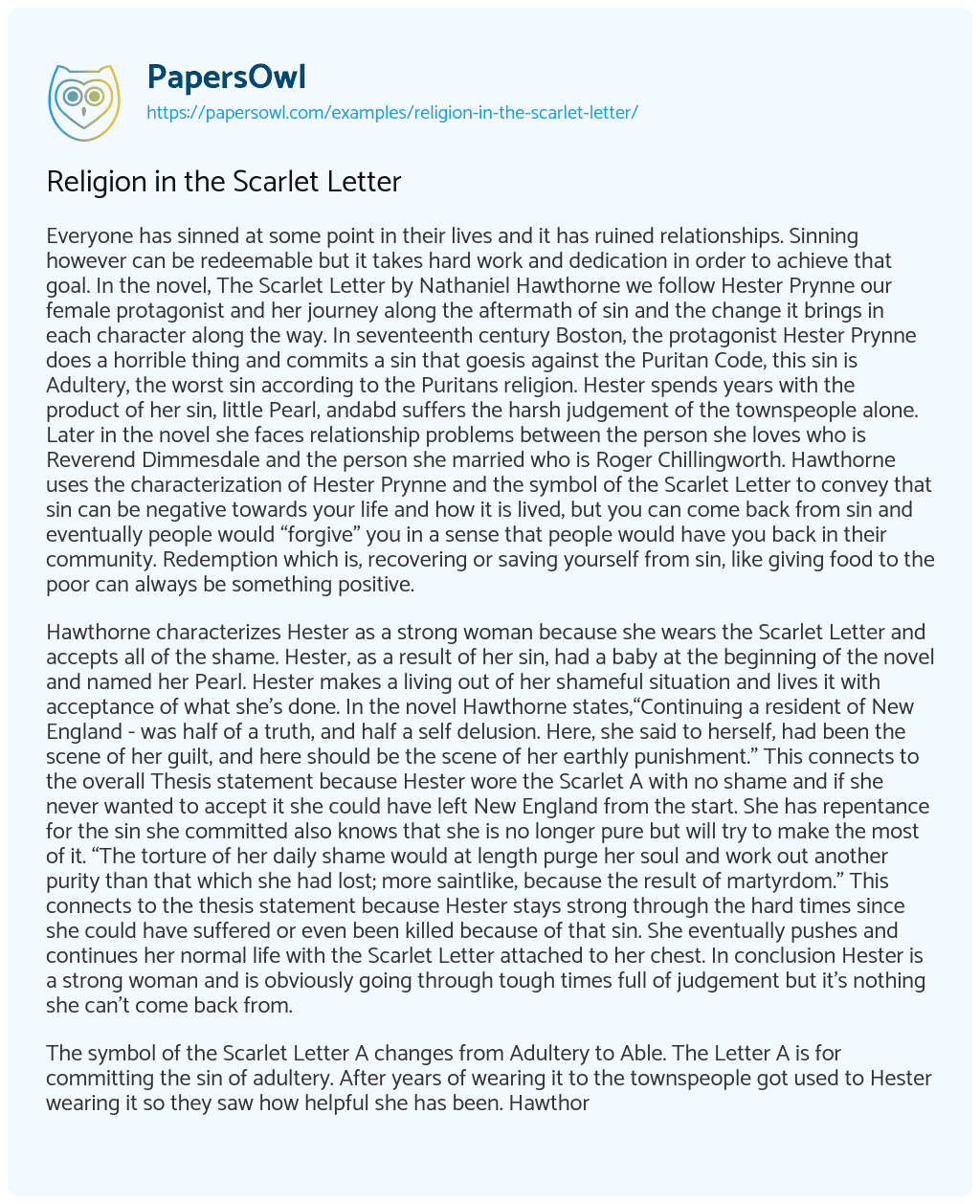 Everyone has sinned at some point in their lives and it has ruined relationships. Sinning however can be redeemable but it takes hard work and dedication in order to achieve that goal. In the novel, The Scarlet Letter by Nathaniel Hawthorne we follow Hester Prynne our female protagonist and her journey along the aftermath of sin and the change it brings in each character along the way. In seventeenth century Boston, the protagonist Hester Prynne does a horrible thing and commits a sin that goesis against the Puritan Code, this sin is Adultery, the worst sin according to the Puritans religion. Hester spends years with the product of her sin, little Pearl, andabd suffers the harsh judgement of the townspeople alone. Later in the novel she faces relationship problems between the person she loves who is Reverend Dimmesdale and the person she married who is Roger Chillingworth. Hawthorne uses the characterization of Hester Prynne and the symbol of the Scarlet Letter to convey that sin can be negative towards your life and how it is lived, but you can come back from sin and eventually people would “forgive” you in a sense that people would have you back in their community. Redemption which is, recovering or saving yourself from sin, like giving food to the poor can always be something positive.

Hawthorne characterizes Hester as a strong woman because she wears the Scarlet Letter and accepts all of the shame. Hester, as a result of her sin, had a baby at the beginning of the novel and named her Pearl. Hester makes a living out of her shameful situation and lives it with acceptance of what she’s done. In the novel Hawthorne states,“Continuing a resident of New England – was half of a truth, and half a self delusion. Here, she said to herself, had been the scene of her guilt, and here should be the scene of her earthly punishment.” This connects to the overall Thesis statement because Hester wore the Scarlet A with no shame and if she never wanted to accept it she could have left New England from the start. She has repentance for the sin she committed also knows that she is no longer pure but will try to make the most of it. “The torture of her daily shame would at length purge her soul and work out another purity than that which she had lost; more saintlike, because the result of martyrdom.” This connects to the thesis statement because Hester stays strong through the hard times since she could have suffered or even been killed because of that sin. She eventually pushes and continues her normal life with the Scarlet Letter attached to her chest. In conclusion Hester is a strong woman and is obviously going through tough times full of judgement but it’s nothing she can’t come back from.

The symbol of the Scarlet Letter A changes from Adultery to Able. The Letter A is for committing the sin of adultery. After years of wearing it to the townspeople got used to Hester wearing it so they saw how helpful she has been. Hawthorne wrote, “Do you see that woman with embroidered badge?” they would say to strangers, “ It is our Hester-the town’s own Hester-who is so kind to the poor, so helpful to the sick, so comforting to the afflicted!”. This connects to the change of the Scarlet Letter because Hester has changed the whole meaning of it and made it into a positive standard. Hester has been strong for years with the Scarlet Letter and has worked for years to give herself a good reputation. Hawthorne wrote again, “That many people refused to interpret the Scarlet “A” by its’ original signification. They said it meant “Able”, so strong was Hester Prynne, with a woman’s strength.”. This connects to the scarlet letters change in the novel because the A is a negative symbol since it represents sin in the Puritan Code. Hester made people reinterpret the meaning of the letter by doing good deeds. The Scarlet Letter A can be a negative thing because people will see Hester as a horrible person who only does bad things. But it can be positive because it can give people awareness on what would happen if you commit a sin.

Hester’s characterization and the letter A changing from Adultery to Able proves that Hawthorne believes that sin can be redeemable and you can come back from anything. Hester gets a job and helps people in need such as the poor in needlework. “Much of the time which she might readily have applied to the better efforts of her art, she employed in making coarse garments for the poor.” This connects to the overall thesis statement because Hester is making the most out of her life with that Scarlet Letter trying to bring her down. She helps/ gives back to her community although they treated her badly. Therefore Hester’s characterization and the change in the meaning of the Scarlet Letter A portrayed that you can redeem yourself from any situation.

Positivity can be produced from negativity and this can help you make a large impact on the lives of others. Hawthorne characterize Hester as a strong woman and she makes the most out of her life with the Scarlet Letter. The symbol of the A changes from Adultery to Able. Hesters characterization and the Letter A changing from Adultery to Able proves that Hawthorne believes that committing a sin can be redeemable. In the real world if you sin, people will look at others like they’ve just killed someone in broad daylight. But if one works hard enough to get that good reputation back then you can once again be a positive person.

Religion in the Scarlet Letter. (2021, Apr 19). Retrieved from https://papersowl.com/examples/religion-in-the-scarlet-letter/