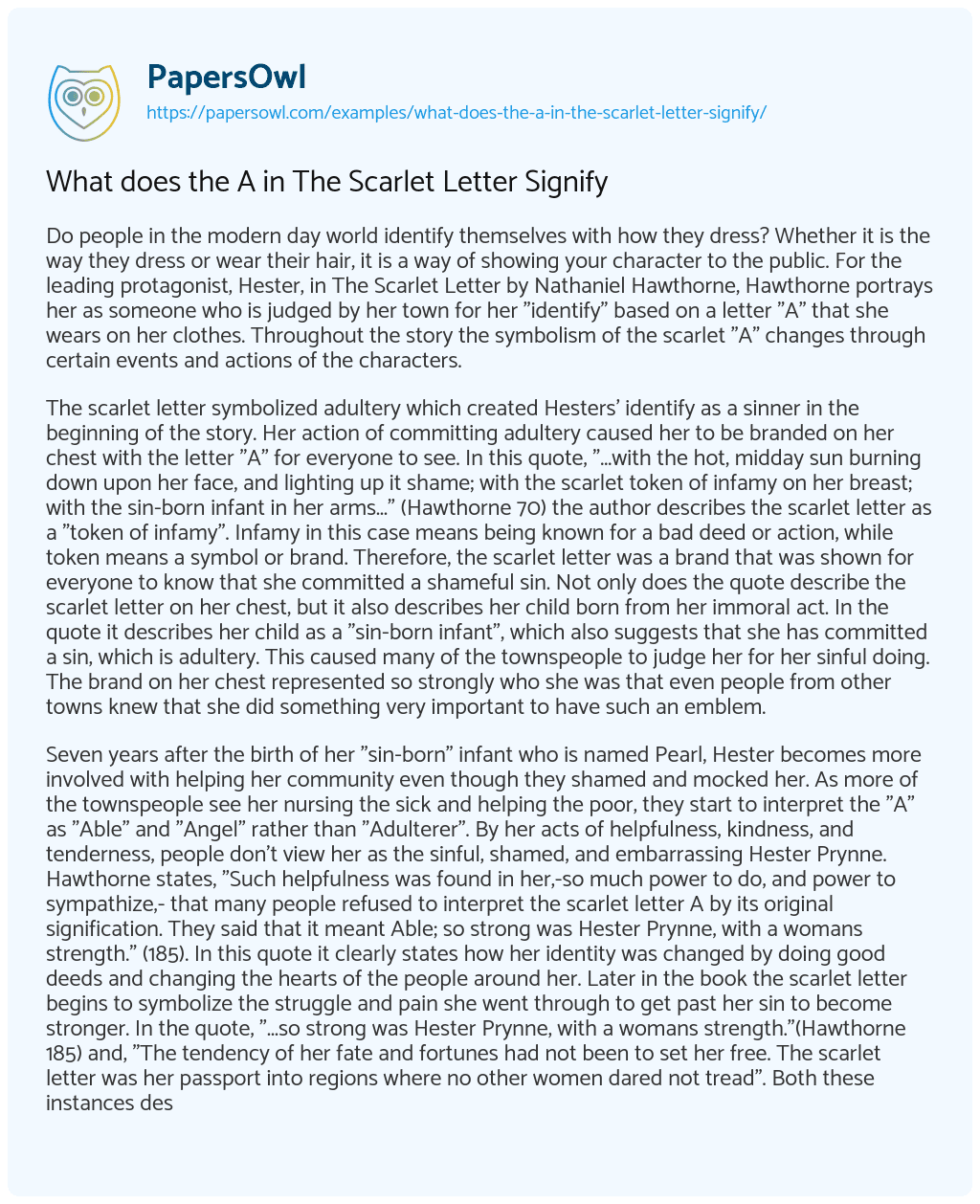 Do people in the modern day world identify themselves with how they dress? Whether it is the way they dress or wear their hair, it is a way of showing your character to the public. For the leading protagonist, Hester, in The Scarlet Letter by Nathaniel Hawthorne, Hawthorne portrays her as someone who is judged by her town for her “identify” based on a letter “A” that she wears on her clothes. Throughout the story the symbolism of the scarlet “A” changes through certain events and actions of the characters.

The scarlet letter symbolized adultery which created Hesters’ identify as a sinner in the beginning of the story. Her action of committing adultery caused her to be branded on her chest with the letter “A” for everyone to see. In this quote, “…with the hot, midday sun burning down upon her face, and lighting up it shame; with the scarlet token of infamy on her breast; with the sin-born infant in her arms…” (Hawthorne 70) the author describes the scarlet letter as a “token of infamy”. Infamy in this case means being known for a bad deed or action, while token means a symbol or brand. Therefore, the scarlet letter was a brand that was shown for everyone to know that she committed a shameful sin. Not only does the quote describe the scarlet letter on her chest, but it also describes her child born from her immoral act. In the quote it describes her child as a “sin-born infant”, which also suggests that she has committed a sin, which is adultery. This caused many of the townspeople to judge her for her sinful doing. The brand on her chest represented so strongly who she was that even people from other towns knew that she did something very important to have such an emblem.

Seven years after the birth of her “sin-born” infant who is named Pearl, Hester becomes more involved with helping her community even though they shamed and mocked her. As more of the townspeople see her nursing the sick and helping the poor, they start to interpret the “A” as “Able” and “Angel” rather than “Adulterer”. By her acts of helpfulness, kindness, and tenderness, people don’t view her as the sinful, shamed, and embarrassing Hester Prynne. Hawthorne states, “Such helpfulness was found in her,-so much power to do, and power to sympathize,- that many people refused to interpret the scarlet letter A by its original signification. They said that it meant Able; so strong was Hester Prynne, with a womans strength.” (185). In this quote it clearly states how her identity was changed by doing good deeds and changing the hearts of the people around her. Later in the book the scarlet letter begins to symbolize the struggle and pain she went through to get past her sin to become stronger. In the quote, “…so strong was Hester Prynne, with a womans strength.”(Hawthorne 185) and, “The tendency of her fate and fortunes had not been to set her free. The scarlet letter was her passport into regions where no other women dared not tread”. Both these instances describe how strong Hester had become, but also how her past was so painful that no other women desired to go down that same path (Hawthorne 232-233). Through this the scarlet letter symbolizes her shameful past that will always linger as long as she is wearing it.

In the end of the book, the scarlet letter symbolizes her former sad, sinful, and dreary identity. Without wearing the scarlet letter, she is passionate, lively, and free, and the sun seems to shine on her once again. The quote, “The stigma gone, Hester heaved a long deep sigh, in which the burden of the shame and anquish departed from her spirit…she had not known the weight, until she felt the freedom!” exclaims how when Hester finally took off her sin bearing token, she felt free like she once did (Hawthorne 236). Her old identity of being a young passionate woman was restored. The scarlet letter, like a heavy weight, was lifted off of her shoulders. The quote, “Her sex, her youth, and the whole richness of her beauty, came back from what men call the irrevocable past…All at once, as with a sudden smile of heaven, forth burst the sunshine, pouring a very flood into the obscure forest.” also describes how when the scarlet letter was taken off, she became her former self (Hawthorne 236). When she wore the scarlet letter, it was claimed that the sunshine seemed to hide from her. That even the sun itself knew of what crime she had committed, and shunned her from ever feeling the warmth of it. As she threw out her past, the sun immediately seemed to shine and warm her like it used to. In the end, the scarlet letter still symbolized her old identity and past that will always be there, but won’t take over who she is.
Throughout the novel, the symbolism of the scarlet letter changes with Hesters actions and events. In the beginning of the novel it symbolized adultery, which was the crime she committed. Then it started to symbolize other words that were more hopeful and kind than adulterer through Hesters actions of helping her people. Lastly, it symbolized her painful past that she would always have, not on what she wears, but in who she was. This impacted the understanding of the novel by explaining what the scarlet letter really meant, while also describing how Hesters identity was sewn into that scarlet letter “A” onto her clothes.

What does the A in The Scarlet Letter Signify. (2019, Sep 07). Retrieved from https://papersowl.com/examples/what-does-the-a-in-the-scarlet-letter-signify/