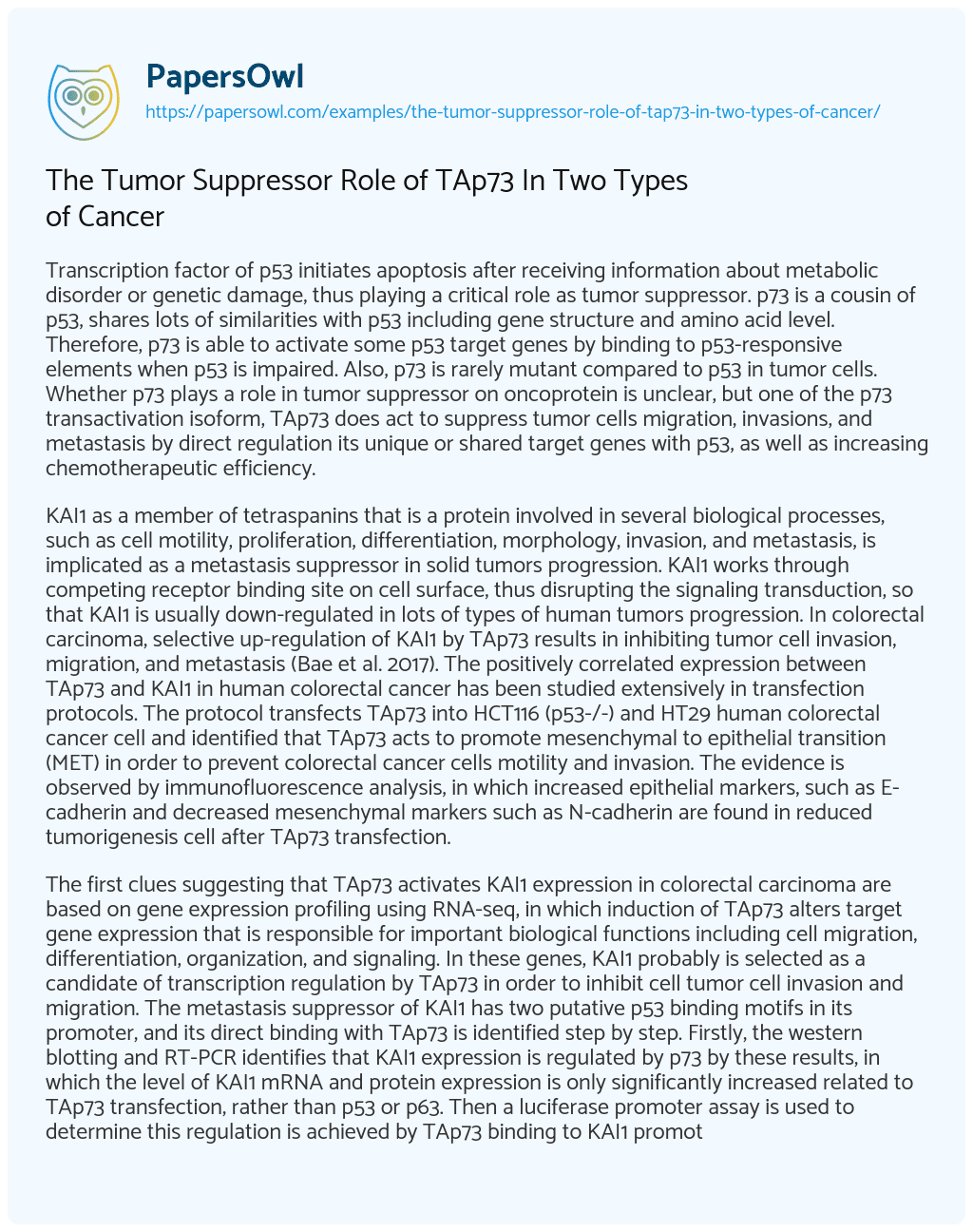 Transcription factor of p53 initiates apoptosis after receiving information about metabolic disorder or genetic damage, thus playing a critical role as tumor suppressor. p73 is a cousin of p53, shares lots of similarities with p53 including gene structure and amino acid level. Therefore, p73 is able to activate some p53 target genes by binding to p53-responsive elements when p53 is impaired. Also, p73 is rarely mutant compared to p53 in tumor cells. Whether p73 plays a role in tumor suppressor on oncoprotein is unclear, but one of the p73 transactivation isoform, TAp73 does act to suppress tumor cells migration, invasions, and metastasis by direct regulation its unique or shared target genes with p53, as well as increasing chemotherapeutic efficiency.

KAI1 as a member of tetraspanins that is a protein involved in several biological processes, such as cell motility, proliferation, differentiation, morphology, invasion, and metastasis, is implicated as a metastasis suppressor in solid tumors progression. KAI1 works through competing receptor binding site on cell surface, thus disrupting the signaling transduction, so that KAI1 is usually down-regulated in lots of types of human tumors progression. In colorectal carcinoma, selective up-regulation of KAI1 by TAp73 results in inhibiting tumor cell invasion, migration, and metastasis (Bae et al. 2017). The positively correlated expression between TAp73 and KAI1 in human colorectal cancer has been studied extensively in transfection protocols. The protocol transfects TAp73 into HCT116 (p53-/-) and HT29 human colorectal cancer cell and identified that TAp73 acts to promote mesenchymal to epithelial transition (MET) in order to prevent colorectal cancer cells motility and invasion. The evidence is observed by immunofluorescence analysis, in which increased epithelial markers, such as E-cadherin and decreased mesenchymal markers such as N-cadherin are found in reduced tumorigenesis cell after TAp73 transfection.

The first clues suggesting that TAp73 activates KAI1 expression in colorectal carcinoma are based on gene expression profiling using RNA-seq, in which induction of TAp73 alters target gene expression that is responsible for important biological functions including cell migration, differentiation, organization, and signaling. In these genes, KAI1 probably is selected as a candidate of transcription regulation by TAp73 in order to inhibit cell tumor cell invasion and migration. The metastasis suppressor of KAI1 has two putative p53 binding motifs in its promoter, and its direct binding with TAp73 is identified step by step. Firstly, the western blotting and RT-PCR identifies that KAI1 expression is regulated by p73 by these results, in which the level of KAI1 mRNA and protein expression is only significantly increased related to TAp73 transfection, rather than p53 or p63. Then a luciferase promoter assay is used to determine this regulation is achieved by TAp73 binding to KAI1 promoter. Because TAp73 transfected colorectal cells greater luciferase activity levels are detected in reporter constructs contained KAI1 promoter gene compared to those constructs without promoter gene. And then, chromatin immunoprecipitation (ChIP) assay is performed and PCR analysis is used to the presence of KAI1 promoter after precipitation, in order to determine the direct binding between TAp73 and KAI1 promoter. As expected, the positive signal bands only produce in chromatin precipitated by anti-TAp73 antibodies rather than igG (control). At last, the crucial step is determination that TAp73 binds to the putative p53 binding motifs of KAI1 promoter. For this, luciferase promoter assays are performed in order to detect the promoter activity for constructed reporter gene containing mutations in two different putative p53 binding sites. Interestingly, the activity of KAI1 promoter is significantly decreased with mutation in binding site 1 compared to no effect in binding site 2. Also, after mutated annealed double-strand KAI1 oligonucleotide probes at both putative TAp73-binding sites, only TAp73-binding site 1 mutation lose binding capacity to TAp73. Now, it’s clear that the functional binding site 1 of TAp73 directly binds to KAI1, leading to activate its transcription for tumor suppression activity.

The importance of KAI1 is indispensable for the inhibitory effects of TAp73 on cell invasions and migration of colorectal carcinoma. Since, the knockdown of KAI1 expression by specific siRNA or shRNA suggests impeding MET demonstrated by reversely increased E-cadherin and decreased N-cadherin, as well as deteriorative hepatic metastasis in HCT116 cells. Taken together, the positive correlated TAp73 and KAI1 expression is significantly associated to inhibit the metastatic behavior in colorectal carcinoma.

How does TAp73 work in neuroblastoma? Neuroblastoma (NBL) is a solid tumor with a high incidence in childhood. NBL has less relation to p53 than p73, since p53 is usually isolated in the cytoplasm compared to TAp73 located in normal nuclear. However, the tumor suppressor of TAp73 cannot work effectively in NBL as in colorectal carcinoma. Because the tumor progression and poor prognosis in NBL are associated with the frequent ?Np73 overexpression. Therefore, the efficient strategy is eliminating the therapeutic resistance caused by disrupted TAp73 function. As mentioned earlier, p73 is rarely mutated in human cancer cell. Therefore, the interaction of TAp73 with MDM2 and mutant p53 usually blocks its transcriptional activity, leading to TAp73 inactivation. Fortunately, a new activator of TAp73, 1-carbaldehyde-3,4-di-methoxyxanthone (LEM2) is identified, which activator acts to disrupt the interaction of TAp73 with MDM2 and mutant p53, thus showing antitumor activity in NBL.

The inhibitor role of LEM2 on the TAp73 interaction with MDM2 and mutant p53 is investigated in clone cancer cell lines. Sulforhodamine B (SRB) assay suggests that the antitumor activity of LEM2 is significantly higher regardless wild-type or null p53 HCT116 cells. Therefore, the inhibitory activity of LEM2 is independent on p53 in human tumor cells, which conclusion is consistent with that LEM2 still can induces cell cycle arrest and apoptosis demonstrated by Annexin V-positive cells and PARP cleavage in p53-null HCT116 cells. Surprisingly, the antiproliferation effect of LEM2 is irrelevant with the induction of DNA damage after examination the unchanged micronuclei in human lymphocytes. Then, our interest shifts into the mechanism of the antitumor activity induced by LEM2.

Cell growth inhibitory activity of LEM2 is most probably associated to restore the function of tumor suppressor TAp73 from its potent inhibitors such as MDM2 and mutant p53 (Gomes et al. 2018). To determine the hypothesis, the activity of LEM2 related to p53-family is identified first, a western blot analysis is performed. Which results revealed that cell growth inhibition induced by LEM-2 in p53-null HCT116 cells follows the regulation of several p53-family transcriptional target gene expressions. For example, LEM2 treatment increases the protein levels of TAp73, MDM2, p21, and Bax; and increases the mRNA levels of CDKN1A, MDM2 and BAX; but reduces the expression of Bcl2 and VEGF protein. After that, a p73-dependent growth inhibitory activity of LEM2 in p53-null HCT116 cells is identified based on the results, in which p73-silenced cells showed resistance to the inhibitory effect of LEM2 compared to control group. And then, the important thing is the determination that LEM2 disrupts the TAp73-MDM2 interaction. For this, a yeast assay is performed in order to determine the restored TAp73-induced growth inhibition that is previously abrogated by MDM2. As expected, growth inhibition is restored in yeast cells co-expressing TAp73 and MDM2 in a LEM2 does dependent way rather than in the control yeast expressing TAp73 or MDM2 alone. Also, co-immunoprecipitation analysis reveals that MDM2 precipitation with TAp73 is significantly reduced after LEM2 treatment, but MDM2 precipitation with p53 is unaffected. Taken together, LEM2 interferes the TAp73-MDM2 interaction in order to suppress tumor activity, and this disruption is independent on p53.

The first clues suggest that antiproliferation activity of LEM2 is mediated by TAp73 activation are obtained from the aberrantly highest IC50 value of LEM2 in HT-29 cells (mutp53-R273H) compared to other mutant p53-expressing tumor cells by SRB assay, specially to the MDA-MB-468 cells expressing same mutp53-R273H, since we find that extremely high IC50 is associated with a much lower proteins level of TAp73. Similarity, LEM2 initiates growth inhibitory activity such as cell cycle arrest and apoptosis though regulation of several TAp73 transcriptional target gene expression in MDA-MB-468 cells. Right now, we move our interest from the involvement of TAp73 in the inhibitory effect of LEM2 on mutp53-expressing tumor cells to the abolished TAp73-mutp53 interaction by LEM2. We first perform a yeast assay, in which TAp73 expression significantly induce yeast growth inhibition, but the inhibitory effect is eliminated after co-expression with mutp53. After that, we reestablish yeast growth assay with a co-expression TAp73 and mutp53-R273H, and as expected, LEM2 is able to restore the TAp73-induced yeast growth inhibition compared to the normal yeast growth in control group that expresses TAp73 or mutp53 alone. Similar to co-immunoprecipitation analysis of MDM2, the amount of TAp73 precipitation with mutp53 is significantly reduced with LEM2 treatment. These results together support that LEM2 disrupts the TAp73-mutp53 interaction, so that saving the antitumor activity of TAp73.

The ultimate goal of this research focused on TAp73-dependent growth inhibitory activity of LEM2 hopes to advance the chemotherapeutical effect in NBL. As expected, MTT assay reveals that cell viability of all NBL cells are significantly reduced by LEM2. Also, NBL-14 cells treated with combination of DOXO/cis-platin with LEM2 showed significantly increased cytotoxicity compared to conventional chemotherapeutic alone. Which excites our interest in the role of TAp73 in the prognosis of chemotherapy. In addition to NBL, the induction of TAp73 by platinum-based compounds is an effective strategy to reduce drug resistance in chronic lymphocytic leukemia (CLL) (Tonino et al. 2015). The activity of most platinum-based compounds such as fludarabine rely on intact p53 function. However, drug resistance produced in repeated therapeutic cycle usually mutates or blocks the gene expression in response to p53. Cisplatinum (CDDP) is one of platinum-based antitumor agent, which drug show highly efficiency in overcoming drug resistance. Although the precise mechanism is unclear, we conclude drug efficiency of CDDP is dependent on alternative target such as TAp73, bypassing the dysfunctional p53.

The Tumor Suppressor Role of TAp73 In Two Types of Cancer. (2019, Sep 07). Retrieved from https://papersowl.com/examples/the-tumor-suppressor-role-of-tap73-in-two-types-of-cancer/