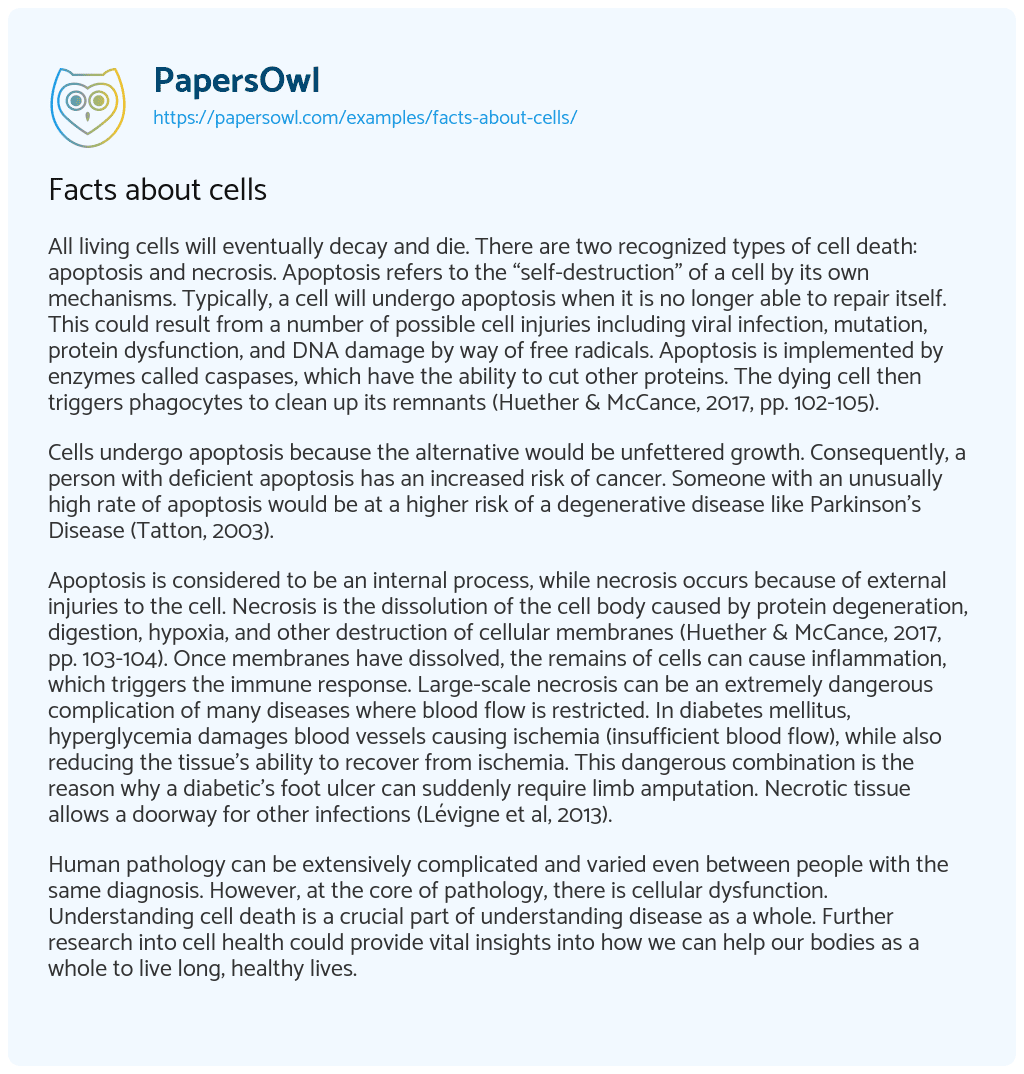 All living cells will eventually decay and die. There are two recognized types of cell death: apoptosis and necrosis. Apoptosis refers to the “self-destruction” of a cell by its own mechanisms. Typically, a cell will undergo apoptosis when it is no longer able to repair itself. This could result from a number of possible cell injuries including viral infection, mutation, protein dysfunction, and DNA damage by way of free radicals. Apoptosis is implemented by enzymes called caspases, which have the ability to cut other proteins. The dying cell then triggers phagocytes to clean up its remnants (Huether & McCance, 2017, pp. 102-105).

Cells undergo apoptosis because the alternative would be unfettered growth. Consequently, a person with deficient apoptosis has an increased risk of cancer. Someone with an unusually high rate of apoptosis would be at a higher risk of a degenerative disease like Parkinson’s Disease (Tatton, 2003).

Apoptosis is considered to be an internal process, while necrosis occurs because of external injuries to the cell. Necrosis is the dissolution of the cell body caused by protein degeneration, digestion, hypoxia, and other destruction of cellular membranes (Huether & McCance, 2017, pp. 103-104). Once membranes have dissolved, the remains of cells can cause inflammation, which triggers the immune response. Large-scale necrosis can be an extremely dangerous complication of many diseases where blood flow is restricted. In diabetes mellitus, hyperglycemia damages blood vessels causing ischemia (insufficient blood flow), while also reducing the tissue’s ability to recover from ischemia. This dangerous combination is the reason why a diabetic’s foot ulcer can suddenly require limb amputation. Necrotic tissue allows a doorway for other infections (Lévigne et al, 2013).

Human pathology can be extensively complicated and varied even between people with the same diagnosis. However, at the core of pathology, there is cellular dysfunction. Understanding cell death is a crucial part of understanding disease as a whole. Further research into cell health could provide vital insights into how we can help our bodies as a whole to live long, healthy lives.