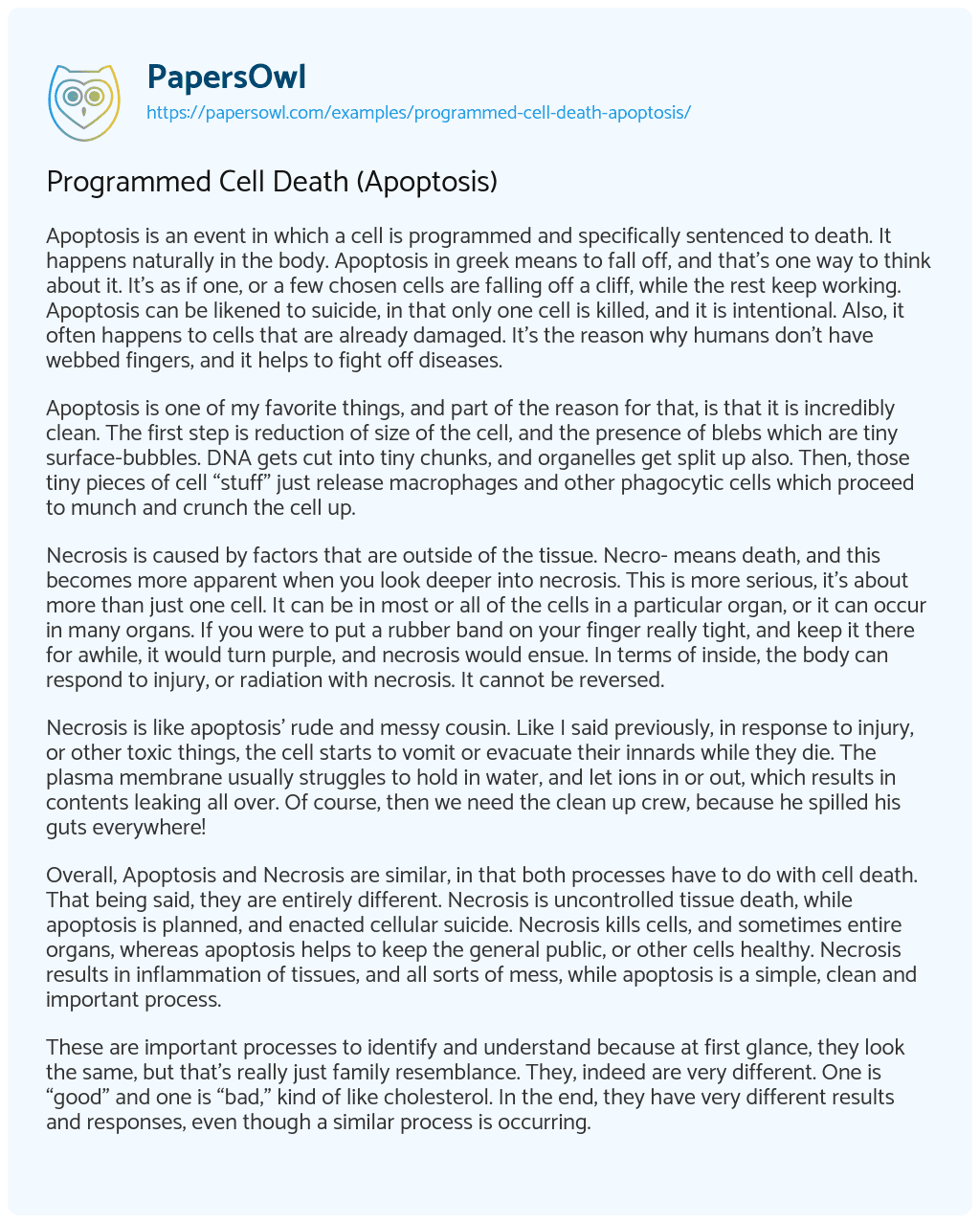 Apoptosis is an event in which a cell is programmed and specifically sentenced to death. It happens naturally in the body. Apoptosis in greek means to fall off, and that’s one way to think about it. It’s as if one, or a few chosen cells are falling off a cliff, while the rest keep working. Apoptosis can be likened to suicide, in that only one cell is killed, and it is intentional. Also, it often happens to cells that are already damaged. It’s the reason why humans don’t have webbed fingers, and it helps to fight off diseases.

Apoptosis is one of my favorite things, and part of the reason for that, is that it is incredibly clean. The first step is reduction of size of the cell, and the presence of blebs which are tiny surface-bubbles. DNA gets cut into tiny chunks, and organelles get split up also. Then, those tiny pieces of cell “stuff” just release macrophages and other phagocytic cells which proceed to munch and crunch the cell up.

Necrosis is caused by factors that are outside of the tissue. Necro- means death, and this becomes more apparent when you look deeper into necrosis. This is more serious, it’s about more than just one cell. It can be in most or all of the cells in a particular organ, or it can occur in many organs. If you were to put a rubber band on your finger really tight, and keep it there for awhile, it would turn purple, and necrosis would ensue. In terms of inside, the body can respond to injury, or radiation with necrosis. It cannot be reversed.

Necrosis is like apoptosis’ rude and messy cousin. Like I said previously, in response to injury, or other toxic things, the cell starts to vomit or evacuate their innards while they die. The plasma membrane usually struggles to hold in water, and let ions in or out, which results in contents leaking all over. Of course, then we need the clean up crew, because he spilled his guts everywhere!

Overall, Apoptosis and Necrosis are similar, in that both processes have to do with cell death. That being said, they are entirely different. Necrosis is uncontrolled tissue death, while apoptosis is planned, and enacted cellular suicide. Necrosis kills cells, and sometimes entire organs, whereas apoptosis helps to keep the general public, or other cells healthy. Necrosis results in inflammation of tissues, and all sorts of mess, while apoptosis is a simple, clean and important process.

These are important processes to identify and understand because at first glance, they look the same, but that’s really just family resemblance. They, indeed are very different. One is “good” and one is “bad,” kind of like cholesterol. In the end, they have very different results and responses, even though a similar process is occurring.