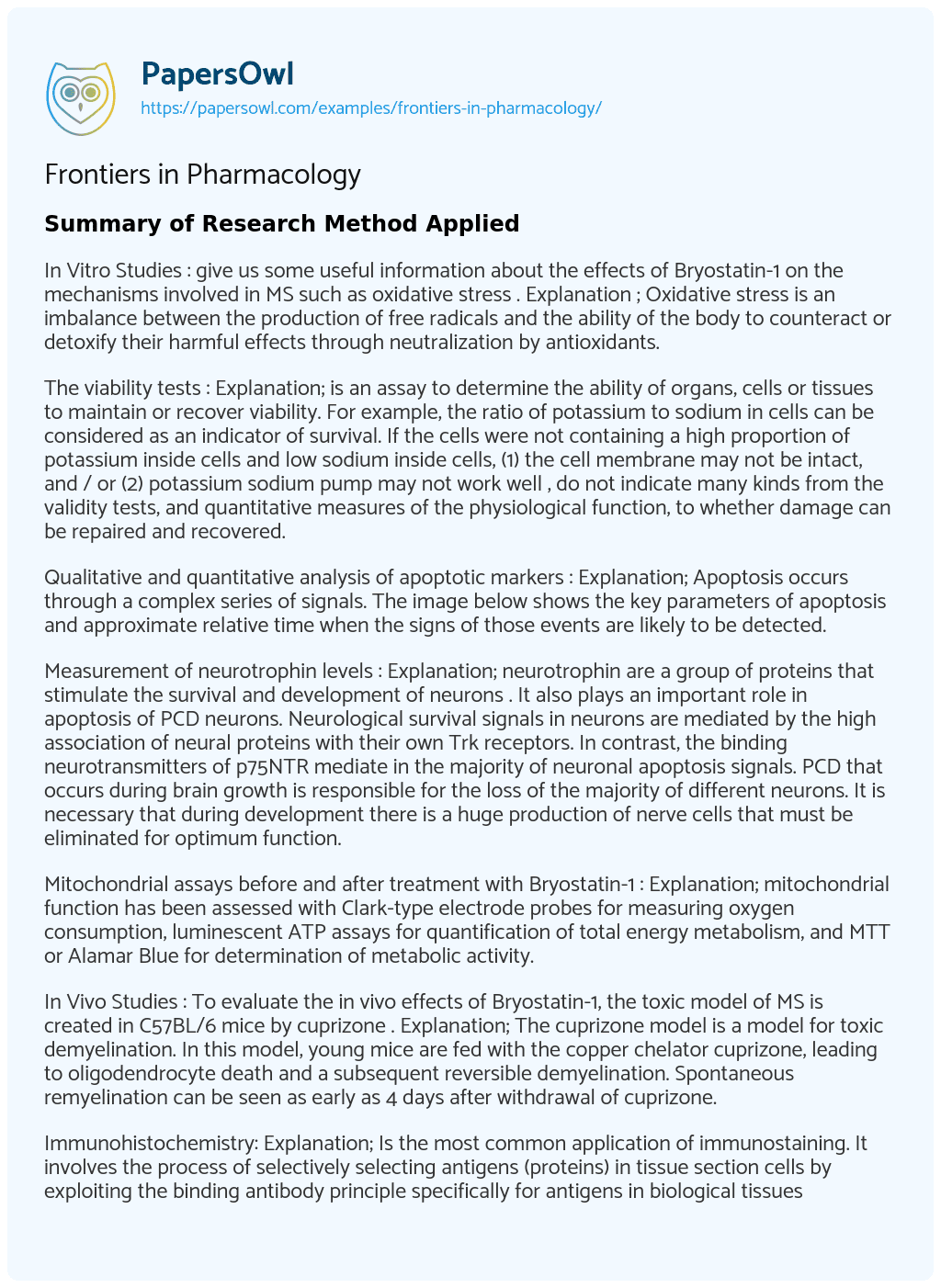 In Vitro Studies : give us some useful information about the effects of Bryostatin-1 on the mechanisms involved in MS such as oxidative stress . Explanation ; Oxidative stress is an imbalance between the production of free radicals and the ability of the body to counteract or detoxify their harmful effects through neutralization by antioxidants.

The viability tests : Explanation; is an assay to determine the ability of organs, cells or tissues to maintain or recover viability. For example, the ratio of potassium to sodium in cells can be considered as an indicator of survival. If the cells were not containing a high proportion of potassium inside cells and low sodium inside cells, (1) the cell membrane may not be intact, and / or (2) potassium sodium pump may not work well , do not indicate many kinds from the validity tests, and quantitative measures of the physiological function, to whether damage can be repaired and recovered.

Qualitative and quantitative analysis of apoptotic markers : Explanation; Apoptosis occurs through a complex series of signals. The image below shows the key parameters of apoptosis and approximate relative time when the signs of those events are likely to be detected.

Measurement of neurotrophin levels : Explanation; neurotrophin are a group of proteins that stimulate the survival and development of neurons . It also plays an important role in apoptosis of PCD neurons. Neurological survival signals in neurons are mediated by the high association of neural proteins with their own Trk receptors. In contrast, the binding neurotransmitters of p75NTR mediate in the majority of neuronal apoptosis signals. PCD that occurs during brain growth is responsible for the loss of the majority of different neurons. It is necessary that during development there is a huge production of nerve cells that must be eliminated for optimum function.

Mitochondrial assays before and after treatment with Bryostatin-1 : Explanation; mitochondrial function has been assessed with Clark-type electrode probes for measuring oxygen consumption, luminescent ATP assays for quantification of total energy metabolism, and MTT or Alamar Blue for determination of metabolic activity.

In Vivo Studies : To evaluate the in vivo effects of Bryostatin-1, the toxic model of MS is created in C57BL/6 mice by cuprizone . Explanation; The cuprizone model is a model for toxic demyelination. In this model, young mice are fed with the copper chelator cuprizone, leading to oligodendrocyte death and a subsequent reversible demyelination. Spontaneous remyelination can be seen as early as 4 days after withdrawal of cuprizone.

Immunohistochemistry: Explanation; Is the most common application of immunostaining. It involves the process of selectively selecting antigens (proteins) in tissue section cells by exploiting the binding antibody principle specifically for antigens in biological tissues.

Western blot : Explanation; Is a common way to detect and analyze proteins. It is based on a technology that involves the transfer of proteins, also known as blotting, separated by electrode from the gel to the membrane where it can be precisely visualized.

Real time-PCR analyses on the myelin genes and proteins. Explanation; this analyses plays an important role in monitoring the increase in the product generated during the reaction, in “real time”. The quantitative approach is based on the time or session in which amplification is first detected instead of quantitative measurement of PCR products

Microscopic examinations will help us to investigate the effects of Bryostatin- 1. Elisa kits : to determine the reduction of inflammation . Explanation; Elisa kit play an important role in Particle detection or conducting ligand link assays. Many ELISA types use the detection of enzymes of radish peroxidase (HRP) or alkali phosphatase (AP), along with chromogenic, fluorescent, or chemiluminescent substrates.

Real time-PCR and Western blot analyses to evaluate the effects of Bryostatin on OPC differentiation .Explanation ; OPC Is a subtype of glial cells in the central nervous system. An introduction to oligodendrocytes behaviors may also be able to differentiate into neuronal astrocytes. The various oligodendrocytes support and provide electrically isolated sheaths in the form of myelin sheath, allowing for potential proliferation of work faster and high-precision transmission without the need to increase axial diameter. The loss of OPCs, and differentiated oligodendrocytes, is associated with impairment of neurological functions

Bryostatin-1 administration resulted in improvement of cognition, synaptogenesis, and neurogenesis, and decline of necrosis and astrogliosis in infarcted tissue. Moreover, it has direct antitumor effects in treatment of lymphoma, sarcoma, leukemia, melanoma, and is used breast, colon, lung, and ovarian cancers.

Explanation ; Cognition is defined as the ability of an individual to perform the various mental activities most closely associated with learning and problem solving. Synaptogenesis is the formation of synapses between neurons in the nervous system. Neurogenesis is the process by which nervous system cells are produced by neural stem cells . Astrogliosis is an abnormal increase in the number of astrocytes due to the destruction of nearby neurons from CNS trauma, infection, ischemia, stroke, autoimmune responses, and neurodegenerative disease.

It is well tolerated and its adverse reactions are rare, mild, and reversible. Explanation ; Tolerability refers to the degree to which overt adverse effects of a drug can be tolerated by a patient. Usually, it is measured by the rate of “dropouts”, or patients that forfeit participation in a study due to extreme adverse effects.

Explanation ; Blood brain barrier is a semipermeable membrane separating the blood from the cerebrospinal fluid, and constituting a barrier to the passage of cells, particles, and large molecules. When the drug cross BBB that means it has an effect on brain cells.

Bryostatin-1 with anti-inflammatory, antioxidant, MMPs inhibitors, and activation of neuronal composition other features and advantages include the ability to cross BBB and oral availability may be appropriate for treatment from MS . Explanation; anti-inflammatory is the property of a substance that reduces inflammation or edema induced by certain chemical mediators of inflammation, such as bradykinin, serotonin, and the prostaglandins.

It is necessary to focus on the molecular events occurring after treatment of the cells with Bryostatin-1 in the future studies. Explanation ; molecular event is the initial interaction between a molecule and a biomolecule or biosystem that can be causally linked to an outcome via a pathway. MIEs use knowledge of the chemistry of these processes to aid AOP research and toxicity risk assessment.

Summary of the Paper

Multiple sclerosis is characterized by inflammation ,high concentration of MMPs, myelin damage and BBB damage . Bryostatin-1 has antiinflammatory effects , decreases MMPs level and BBB damage and antioxidant properties , neuroprotective effect . Based on these properties, this paper hypothesized that Bryostatin-1 is an effective treatment in MS. Explanation ; Multiple sclerosis (MS) is a disease that can potentially disrupt the brain and spinal cord (central nervous system).

In MS, the immune system attacks the protective sheath (myelin) that covers nerve fibers and causes problems in communication between your brain and the rest of your body. In the end, the disease can cause permanent damage or deterioration of the nerves. Signs and symptoms of MS vary widely and depend on the amount of nerve damage that nerves affects. Some people with severe MS may lose their ability to walk independently or at all, while others may experience long periods of remission without any new symptoms. Bryostatins are potent modulators of protein kinase C . They have been studied in clinical trials as anti-cancer agents, as anti-AIDS/HIV agents and in people with Alzheimer’s disease.