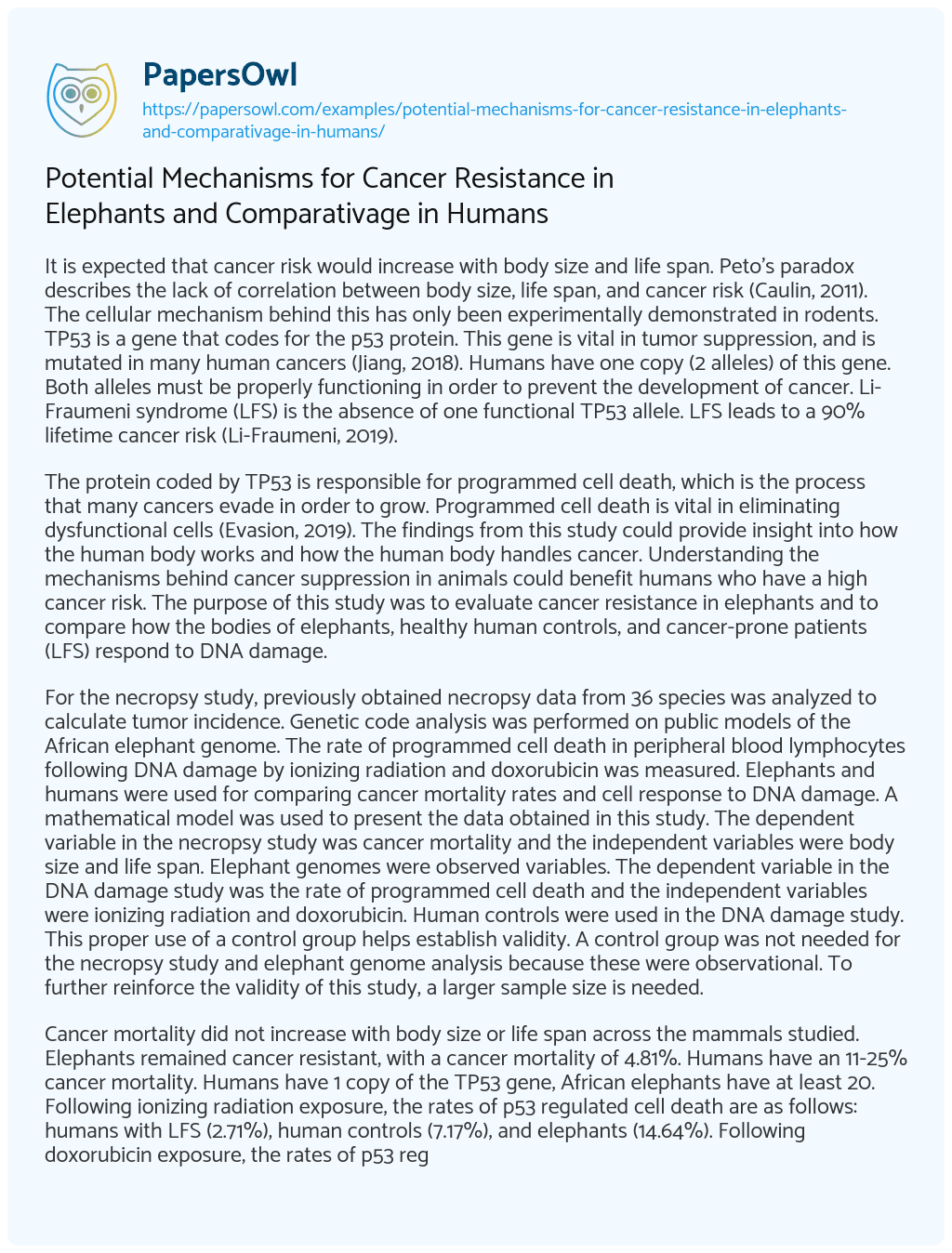 It is expected that cancer risk would increase with body size and life span. Peto’s paradox describes the lack of correlation between body size, life span, and cancer risk (Caulin, 2011). The cellular mechanism behind this has only been experimentally demonstrated in rodents. TP53 is a gene that codes for the p53 protein. This gene is vital in tumor suppression, and is mutated in many human cancers (Jiang, 2018). Humans have one copy (2 alleles) of this gene. Both alleles must be properly functioning in order to prevent the development of cancer. Li-Fraumeni syndrome (LFS) is the absence of one functional TP53 allele. LFS leads to a 90% lifetime cancer risk (Li-Fraumeni, 2019).

The protein coded by TP53 is responsible for programmed cell death, which is the process that many cancers evade in order to grow. Programmed cell death is vital in eliminating dysfunctional cells (Evasion, 2019). The findings from this study could provide insight into how the human body works and how the human body handles cancer. Understanding the mechanisms behind cancer suppression in animals could benefit humans who have a high cancer risk. The purpose of this study was to evaluate cancer resistance in elephants and to compare how the bodies of elephants, healthy human controls, and cancer-prone patients (LFS) respond to DNA damage.

For the necropsy study, previously obtained necropsy data from 36 species was analyzed to calculate tumor incidence. Genetic code analysis was performed on public models of the African elephant genome. The rate of programmed cell death in peripheral blood lymphocytes following DNA damage by ionizing radiation and doxorubicin was measured. Elephants and humans were used for comparing cancer mortality rates and cell response to DNA damage. A mathematical model was used to present the data obtained in this study. The dependent variable in the necropsy study was cancer mortality and the independent variables were body size and life span. Elephant genomes were observed variables. The dependent variable in the DNA damage study was the rate of programmed cell death and the independent variables were ionizing radiation and doxorubicin. Human controls were used in the DNA damage study. This proper use of a control group helps establish validity. A control group was not needed for the necropsy study and elephant genome analysis because these were observational. To further reinforce the validity of this study, a larger sample size is needed.

Similar research has been conducted to explore the relationship between multiple copies of TP53 and cancer suppression. Sulak, M., et al, found that the increased number of TP53 copies may have played a role in the evolution of large body size and resolution of Peto’s paradox because the increased number of copies causes sensitivity to DNA damage and programmed cell death (Sulak, 2016). A study by Vaquez, JM. et al, showed that LIF6, a protein coded by TP53, may have allowed the evolution of large body size in the ancient ancestors of elephants (Vazquez, 2018).

In conclusion, elephants have a lower-than-expected rate of cancer when compared to other mammals. Elephants having multiple copies of the TP53 gene and an increased rate of programmed cell death after DNA damage could be the evolutionary mechanism behind cancer resistance in elephants. This study also shows that larger animals with longer life spans may develop less cancer. Future research could involve further exploration into the age-related decrease in programmed cell death in Asian elephants and further assembly of the elephant genetic code to help understand the functional differences in programmed cell death in elephants. Further research needs to be conducted to determine if the elephant TP53 retrogene produces a functional protein. This could show that these retrogenes potentially serve as decoys for degradation.

Potential Mechanisms for Cancer Resistance in Elephants and Comparativage in Humans. (2019, Jan 08). Retrieved from https://papersowl.com/examples/potential-mechanisms-for-cancer-resistance-in-elephants-and-comparativage-in-humans/