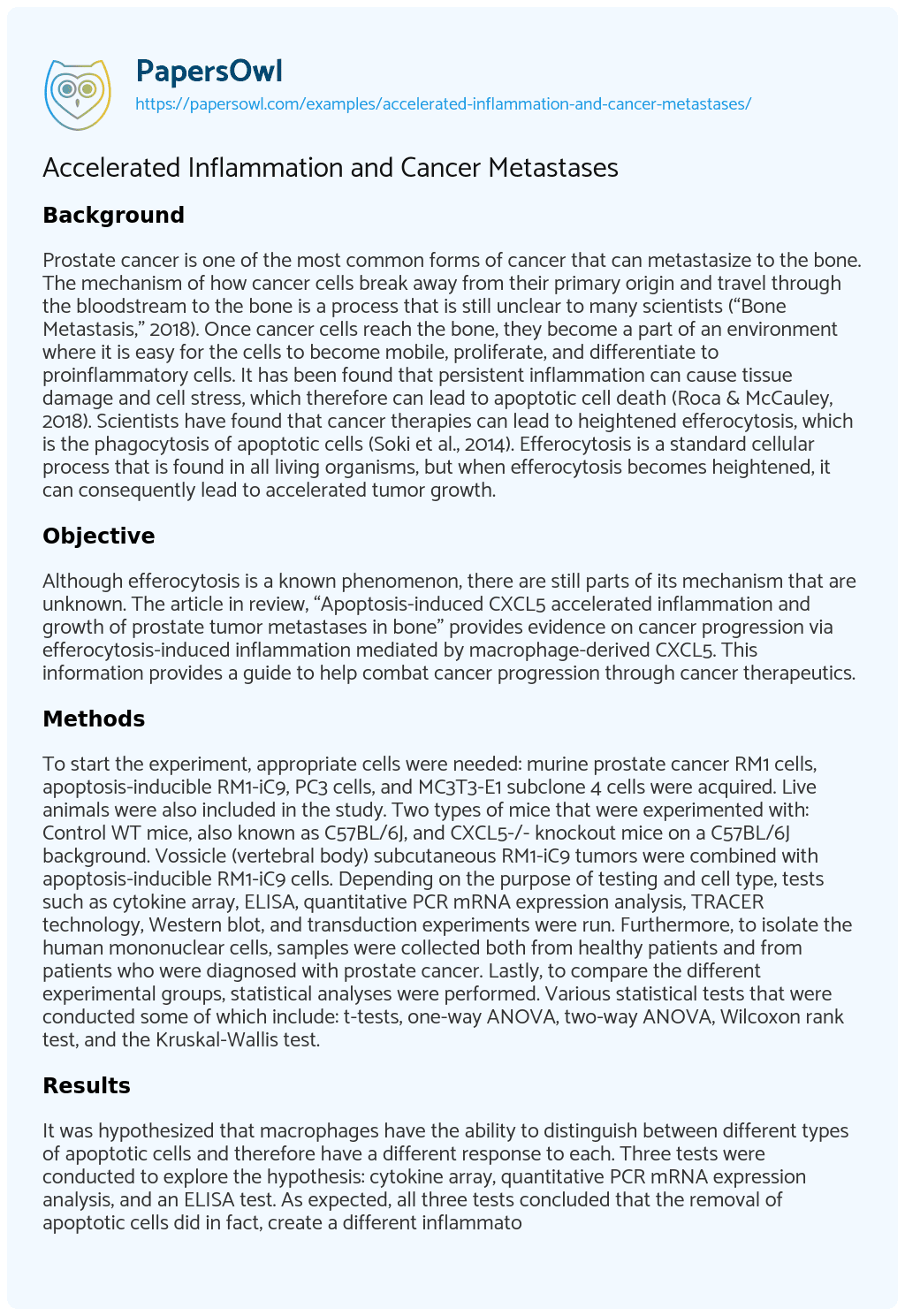 Prostate cancer is one of the most common forms of cancer that can metastasize to the bone. The mechanism of how cancer cells break away from their primary origin and travel through the bloodstream to the bone is a process that is still unclear to many scientists (“Bone Metastasis,” 2018). Once cancer cells reach the bone, they become a part of an environment where it is easy for the cells to become mobile, proliferate, and differentiate to proinflammatory cells. It has been found that persistent inflammation can cause tissue damage and cell stress, which therefore can lead to apoptotic cell death (Roca & McCauley, 2018). Scientists have found that cancer therapies can lead to heightened efferocytosis, which is the phagocytosis of apoptotic cells (Soki et al., 2014). Efferocytosis is a standard cellular process that is found in all living organisms, but when efferocytosis becomes heightened, it can consequently lead to accelerated tumor growth.

Although efferocytosis is a known phenomenon, there are still parts of its mechanism that are unknown. The article in review, “Apoptosis-induced CXCL5 accelerated inflammation and growth of prostate tumor metastases in bone” provides evidence on cancer progression via efferocytosis-induced inflammation mediated by macrophage-derived CXCL5. This information provides a guide to help combat cancer progression through cancer therapeutics.

To start the experiment, appropriate cells were needed: murine prostate cancer RM1 cells, apoptosis-inducible RM1-iC9, PC3 cells, and MC3T3-E1 subclone 4 cells were acquired. Live animals were also included in the study. Two types of mice that were experimented with: Control WT mice, also known as C57BL/6J, and CXCL5-/- knockout mice on a C57BL/6J background. Vossicle (vertebral body) subcutaneous RM1-iC9 tumors were combined with apoptosis-inducible RM1-iC9 cells. Depending on the purpose of testing and cell type, tests such as cytokine array, ELISA, quantitative PCR mRNA expression analysis, TRACER technology, Western blot, and transduction experiments were run. Furthermore, to isolate the human mononuclear cells, samples were collected both from healthy patients and from patients who were diagnosed with prostate cancer. Lastly, to compare the different experimental groups, statistical analyses were performed. Various statistical tests that were conducted some of which include: t-tests, one-way ANOVA, two-way ANOVA, Wilcoxon rank test, and the Kruskal-Wallis test.

It was hypothesized that macrophages have the ability to distinguish between different types of apoptotic cells and therefore have a different response to each. Three tests were conducted to explore the hypothesis: cytokine array, quantitative PCR mRNA expression analysis, and an ELISA test. As expected, all three tests concluded that the removal of apoptotic cells did in fact, create a different inflammatory response. Using TRACER (transcriptional activity cell array) technology, researchers found that there was a difference in inflammatory responses of macrophages between noncancer cells and apoptotic prostate cancer cells.

Although it is known that Stat3 and NF-kB signaling play a role in tumor progression, the study investigated the activation of Nf-kB and Stat3 in macrophages. Once the RM1-iC9 were confirmed to be in the apoptotic state, the cells were then verified to make sure that the cells were able to be efferocytosed. Quantitative PCR analyses were then performed, and the results showed an increased level of mRNA expression of proinflammatory cytokines CXCL5, CCL5, and IL-6. The increased levels of proinflammatory cytokines led researchers to find that cytokine production was dependent on Stat3 and NF-kB inflammatory pathways.

The effect of prostate cancer tumor progression by efferocytosis was explored through the use of an osseous implant vossicle (vertebral body) model. The coimplantation of apoptosis-inducible RM1-iC9 cells and vossicles of 7-day-old C57BL/6J mice into 7-week-old C57BL/6J mice allowed researchers to inject the mice with VEH or AP dimerizer to test if tumor progression occurred. It was found that when inducing apoptosis within cells, tumor growth becomes significant. Tumor cells that were injected with AP treatment were found to have tumor growth around the fourth day with a steady increase in growth the more AP treatment was injected. Additionally, an ELISA test was conducted to test for CXCL5 expression. There was a notable increase in CXCL5 in the AP-treated group. Overall, these results revealed that apoptosis can increase the rate of tumor progression and that efferocytosis does cause increased levels of CXCL5.

Several experiments were conducted that showed that the induction of apoptosis with AP increased efferocytosis causes cancer growth within the bone. The function of CXCL5 in tumor progression was explored. Two groups of mice, the control and the experimental, were treated with AP dimerizer to induce apoptosis and then analyzed for CXCL5 levels. The mice who were CXCL5-deficient had higher trabecular numbers, bone volumes, and reduced trabecular spacing. These results allowed for the conclusion that the CXCL5 deficiency inhibits tumor growth. Furthermore, H&E-staining was performed, and it confirmed that the experimental mice had reduced tumor areas.

To conclude the study, researchers took samples from human cells. Samples were taken from prostate-derived bone cancer and then the samples underwent flow cytometry. It was found that there were increased levels of CD68+, which is a phagocytic monocyte. In addition to CD68+, there were increased levels of CD14+CD16+ and CD14dimCD16+ cells. These cells are considered to be patrolling monocyte subsets. Furthermore, it was found that cells from the prostate-derived cancer patients, had a greater number of cells that could activate efferocytosis compared to the cells of healthy patients. This evidence is important because it provides insight into the specific cells that can lead to cancer metastases. Monocytes are precursors to both dendritic cells and macrophages (Geissmann et al., 2010). These immune cells are vital for the body to be able to defend itself from disease. Currently, cancer therapies target all types of cells, both healthy and cancerous. This research can allow scientists to be able to develop new techniques such as cancer therapeutics or medications that can treat these specific markers.

This study explored the relationship between efferocytosis and cancer cell progression. It was proven that the response of bone marrow macrophages, when involved with efferocytosis of prostate cancer cells, has a different response when compared to the normal reaction. The mechanism of efferocytosis by macrophages causes inflammation and therefore the expression of proinflammatory cytokines which consequently allows for cancer metastases. The CXCL5 protein that was discovered in the apoptosis-induced mice reveals that CXCL5 could serve as a guide for researchers who are studying tumor growth. Overall, the evidence found in this study is vital because into gives insight into creating therapies to combat cancer metastases. Understanding the mechanism of uncontrolled cell growth can help future scientists to be able to treat these diseases before they become incurable.