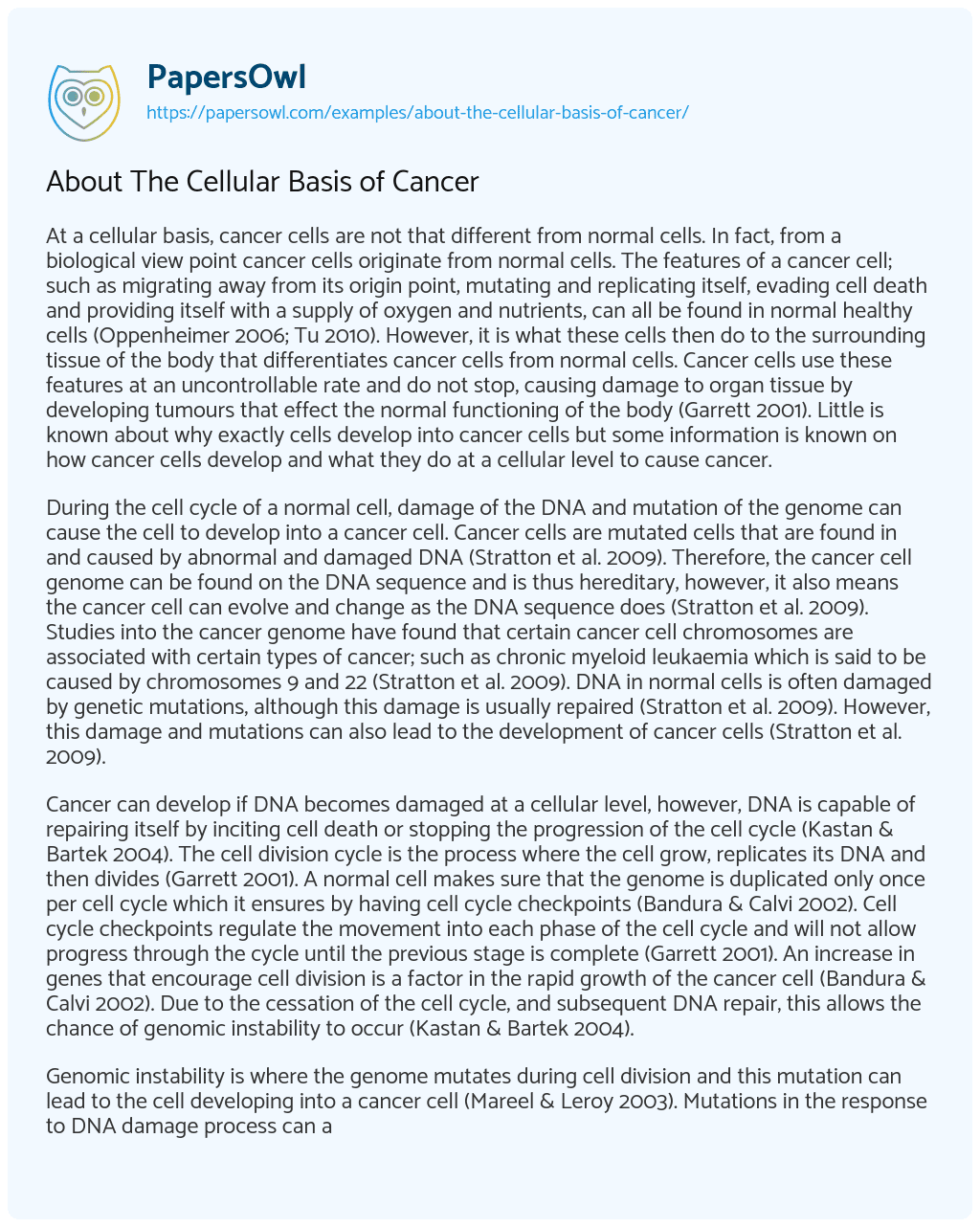 At a cellular basis, cancer cells are not that different from normal cells. In fact, from a biological view point cancer cells originate from normal cells. The features of a cancer cell; such as migrating away from its origin point, mutating and replicating itself, evading cell death and providing itself with a supply of oxygen and nutrients, can all be found in normal healthy cells (Oppenheimer 2006; Tu 2010). However, it is what these cells then do to the surrounding tissue of the body that differentiates cancer cells from normal cells. Cancer cells use these features at an uncontrollable rate and do not stop, causing damage to organ tissue by developing tumours that effect the normal functioning of the body (Garrett 2001). Little is known about why exactly cells develop into cancer cells but some information is known on how cancer cells develop and what they do at a cellular level to cause cancer.

Cancer can develop if DNA becomes damaged at a cellular level, however, DNA is capable of repairing itself by inciting cell death or stopping the progression of the cell cycle (Kastan & Bartek 2004). The cell division cycle is the process where the cell grow, replicates its DNA and then divides (Garrett 2001). A normal cell makes sure that the genome is duplicated only once per cell cycle which it ensures by having cell cycle checkpoints (Bandura & Calvi 2002). Cell cycle checkpoints regulate the movement into each phase of the cell cycle and will not allow progress through the cycle until the previous stage is complete (Garrett 2001). An increase in genes that encourage cell division is a factor in the rapid growth of the cancer cell (Bandura & Calvi 2002). Due to the cessation of the cell cycle, and subsequent DNA repair, this allows the chance of genomic instability to occur (Kastan & Bartek 2004).

In normal cells the cytoskeleton and the extracellular matrix of the cell are important for normal function. The cytoskeleton of the cell is mainly made up of proteins and the extracellular matrix binds cells together to create tissue (Suresh 2007). These structures are altered by cancer; changes in protein structures give cancer cells their ability to move through tissue and thus spread to other parts of the body (Suresh 2007). Cancer cells also have their own signal pathways which allow them to survive and grow (Suresh 2007). Recent studies have stated that the cell that cancer arise from is just as important in the development of cancer as the genetic mutations and abnormal signal pathways within the cell (Tu 2010). In this case, this point of origin would be stem cells and cells like them (Tu 2010). Epithelial cells, or carcinomas, are usually where cancer starts; with the epithelial cells originating from glandular cells, or adenocarcinomas (Fischer et al. 2010). Normal epithelial cells are characterised as regularly space, whereas papillary growth of the epithelial cells or lack of binding between cells can be indications that cancer is developing (Fischer et al. 2010). A random variation of cells is a characteristic of genomic instability which is also a factor in cancer development (Fischer et al. 2010). Stem cells, on the other hand, are the main favourite origin point of cancer in research due to the fact that they share many similar features to cancer cells (Tu 2010). These similarities include; drug resistance, evading apoptosis which is cell death, hypoxia or oxygen deficiency, sustained angiogenesis which is a constant supply of oxygen and nutrients via blood vessels, the ability to continue to replicate itself and active telomerase (Tu 2010). Therefore, it is easy to see how cancer can emerge from cells that originated as stem cells of cell that are like stem cells (Tu 2010).

The features of the cancer cells play a large roll in the uncontrollable growth and spread of cancer. These features are; ignoring signals to stop multiplying, and to stop changing or mutating, the ability to continuously replicate, stop cell death and gain its own blood supply (Ponder 2001). These features allow cancer cells the ability to invade other tissue, with irregular cell growth and the suppression of cell death being the building blocks to abnormal tissue growth in the body, i.e. tumours (Even & Vousden 2001). Once a tumour created by cancer cells reaches angiogenesis and has its own blood supply the cells are considered malignant, cancer cells can enter the blood and lymphatic vessels, a process called intravasation, and they now have access to nutrients and can interact with the blood (Suresh 2007). Cancer cells will the move through the circulatory system and enter the blood vessels of other organs where the can corrupt the tissue, a process called extravasation, cancer cells then form new tumours of metastases (Suresh 2007). This production of secondary tumours is known as the metastatic process.

While studies have shown what and how the cells of the body develop into cancer, little information is know as to why they do this. For now, though, at a cellular level, cancer originates from mutations on normal cells and uses its uncontrollable replication and movement to spread to and invade the rest of the body. Despite its differences, similarities can still be seen between cancer cells and other cells in the body and this could be a factor in how cancer is so uncontrollable. What is known about the cellular basis of cancer is not all there is to know however, and so there is more to learn out there.

About The Cellular Basis of Cancer. (2021, Mar 04). Retrieved from https://papersowl.com/examples/about-the-cellular-basis-of-cancer/