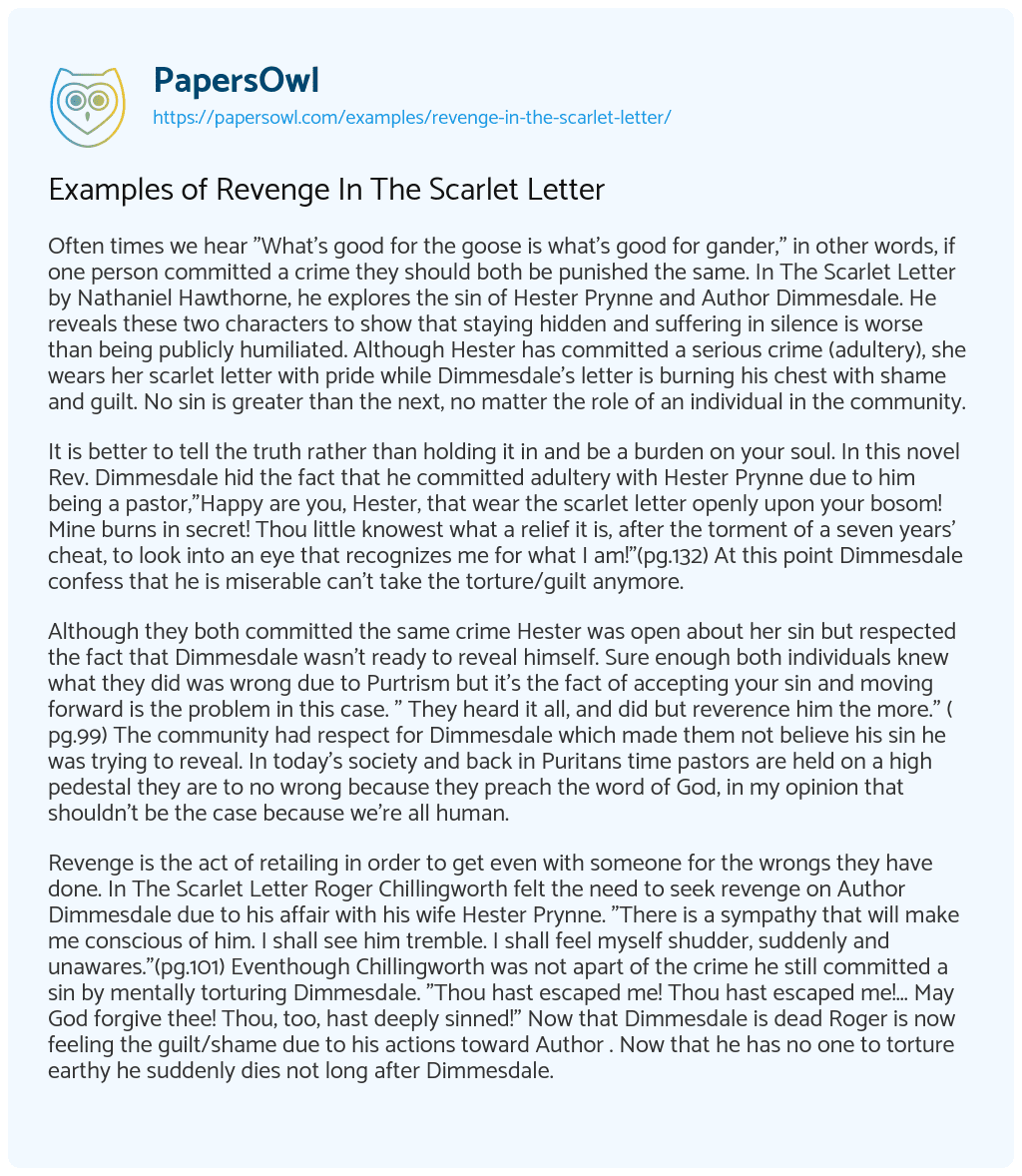 Often times we hear “What’s good for the goose is what’s good for gander,” in other words, if one person committed a crime they should both be punished the same. In The Scarlet Letter by Nathaniel Hawthorne, he explores the sin of Hester Prynne and Author Dimmesdale. He reveals these two characters to show that staying hidden and suffering in silence is worse than being publicly humiliated. Although Hester has committed a serious crime (adultery), she wears her scarlet letter with pride while Dimmesdale’s letter is burning his chest with shame and guilt. No sin is greater than the next, no matter the role of an individual in the community.

It is better to tell the truth rather than holding it in and be a burden on your soul. In this novel Rev. Dimmesdale hid the fact that he committed adultery with Hester Prynne due to him being a pastor,”Happy are you, Hester, that wear the scarlet letter openly upon your bosom! Mine burns in secret! Thou little knowest what a relief it is, after the torment of a seven years’ cheat, to look into an eye that recognizes me for what I am!”(pg.132) At this point Dimmesdale confess that he is miserable can’t take the torture/guilt anymore.

Although they both committed the same crime Hester was open about her sin but respected the fact that Dimmesdale wasn’t ready to reveal himself. Sure enough both individuals knew what they did was wrong due to Purtrism but it’s the fact of accepting your sin and moving forward is the problem in this case. ” They heard it all, and did but reverence him the more.” ( pg.99) The community had respect for Dimmesdale which made them not believe his sin he was trying to reveal. In today’s society and back in Puritans time pastors are held on a high pedestal they are to no wrong because they preach the word of God, in my opinion that shouldn’t be the case because we’re all human.

Revenge is the act of retailing in order to get even with someone for the wrongs they have done. In The Scarlet Letter Roger Chillingworth felt the need to seek revenge on Author Dimmesdale due to his affair with his wife Hester Prynne. “There is a sympathy that will make me conscious of him. I shall see him tremble. I shall feel myself shudder, suddenly and unawares.”(pg.101) Eventhough Chillingworth was not apart of the crime he still committed a sin by mentally torturing Dimmesdale. “Thou hast escaped me! Thou hast escaped me!… May God forgive thee! Thou, too, hast deeply sinned!” Now that Dimmesdale is dead Roger is now feeling the guilt/shame due to his actions toward Author . Now that he has no one to torture earthy he suddenly dies not long after Dimmesdale.

Examples of Revenge In The Scarlet Letter. (2019, Jun 27). Retrieved from https://papersowl.com/examples/revenge-in-the-scarlet-letter/

About the Scarlet Letter by Nathaniel Hawthorne