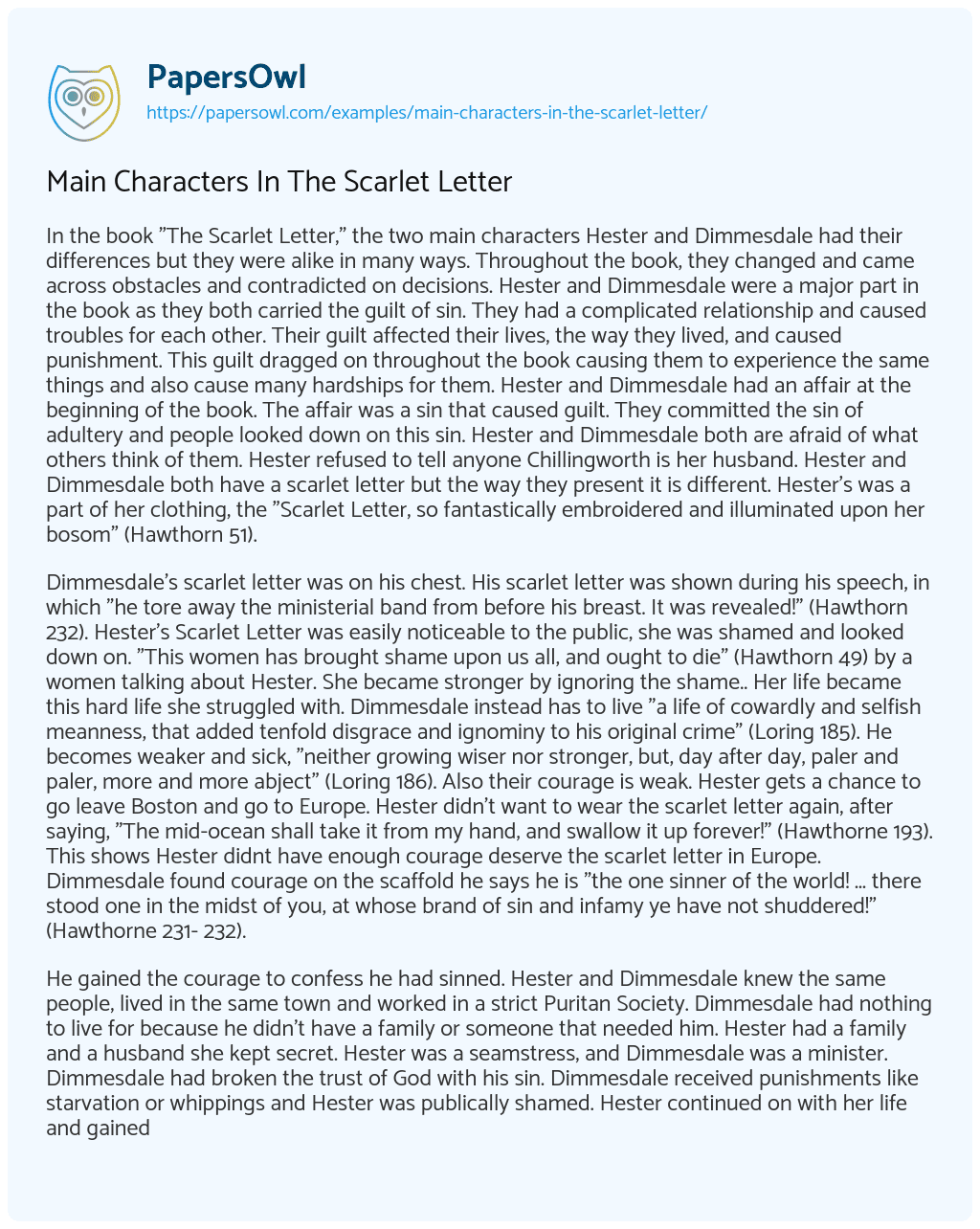 In the book “The Scarlet Letter,” the two main characters Hester and Dimmesdale had their differences but they were alike in many ways. Throughout the book, they changed and came across obstacles and contradicted on decisions. Hester and Dimmesdale were a major part in the book as they both carried the guilt of sin. They had a complicated relationship and caused troubles for each other. Their guilt affected their lives, the way they lived, and caused punishment. This guilt dragged on throughout the book causing them to experience the same things and also cause many hardships for them. Hester and Dimmesdale had an affair at the beginning of the book. The affair was a sin that caused guilt. They committed the sin of adultery and people looked down on this sin. Hester and Dimmesdale both are afraid of what others think of them. Hester refused to tell anyone Chillingworth is her husband. Hester and Dimmesdale both have a scarlet letter but the way they present it is different. Hester’s was a part of her clothing, the “Scarlet Letter, so fantastically embroidered and illuminated upon her bosom” (Hawthorn 51).

Dimmesdale’s scarlet letter was on his chest. His scarlet letter was shown during his speech, in which “he tore away the ministerial band from before his breast. It was revealed!” (Hawthorn 232). Hester’s Scarlet Letter was easily noticeable to the public, she was shamed and looked down on. “This women has brought shame upon us all, and ought to die” (Hawthorn 49) by a women talking about Hester. She became stronger by ignoring the shame.. Her life became this hard life she struggled with. Dimmesdale instead has to live “a life of cowardly and selfish meanness, that added tenfold disgrace and ignominy to his original crime” (Loring 185). He becomes weaker and sick, “neither growing wiser nor stronger, but, day after day, paler and paler, more and more abject” (Loring 186). Also their courage is weak. Hester gets a chance to go leave Boston and go to Europe. Hester didn’t want to wear the scarlet letter again, after saying, “The mid-ocean shall take it from my hand, and swallow it up forever!” (Hawthorne 193). This shows Hester didnt have enough courage deserve the scarlet letter in Europe. Dimmesdale found courage on the scaffold he says he is “the one sinner of the world! … there stood one in the midst of you, at whose brand of sin and infamy ye have not shuddered!” (Hawthorne 231- 232).

He gained the courage to confess he had sinned. Hester and Dimmesdale knew the same people, lived in the same town and worked in a strict Puritan Society. Dimmesdale had nothing to live for because he didn’t have a family or someone that needed him. Hester had a family and a husband she kept secret. Hester was a seamstress, and Dimmesdale was a minister. Dimmesdale had broken the trust of God with his sin. Dimmesdale received punishments like starvation or whippings and Hester was publically shamed. Hester continued on with her life and gained a good reputation because of her actions. Hester was a single-mother who was imprisoned but continued on with her life better than Dimmesdale. Dimmesdale held the guilt in forever and eventually he got sick and died from the stress. They never told anyone about their daughter until before Dimmesdale dies, he told everyone he was the father. The guilt moved on from Hester and Dimmesdale never really fully got over it. The Scarlet Letter was a complicated tragic love story that shows how two people can react totally differently in the same situation. Hester and Dimmesdale were alike because they both didn’t do well with courage and they both had secrets. Hester was stronger and had more power than Dimmesdale. He let himself rot away with the guilt while Hester was trying to overcome the guilt. They both showed equal traits but also they reacted differently in the end.

Main Characters In The Scarlet Letter. (2019, Sep 21). Retrieved from https://papersowl.com/examples/main-characters-in-the-scarlet-letter/

The Scaffold in the Scarlet Letter