Symbolism in the Scarlet Letter 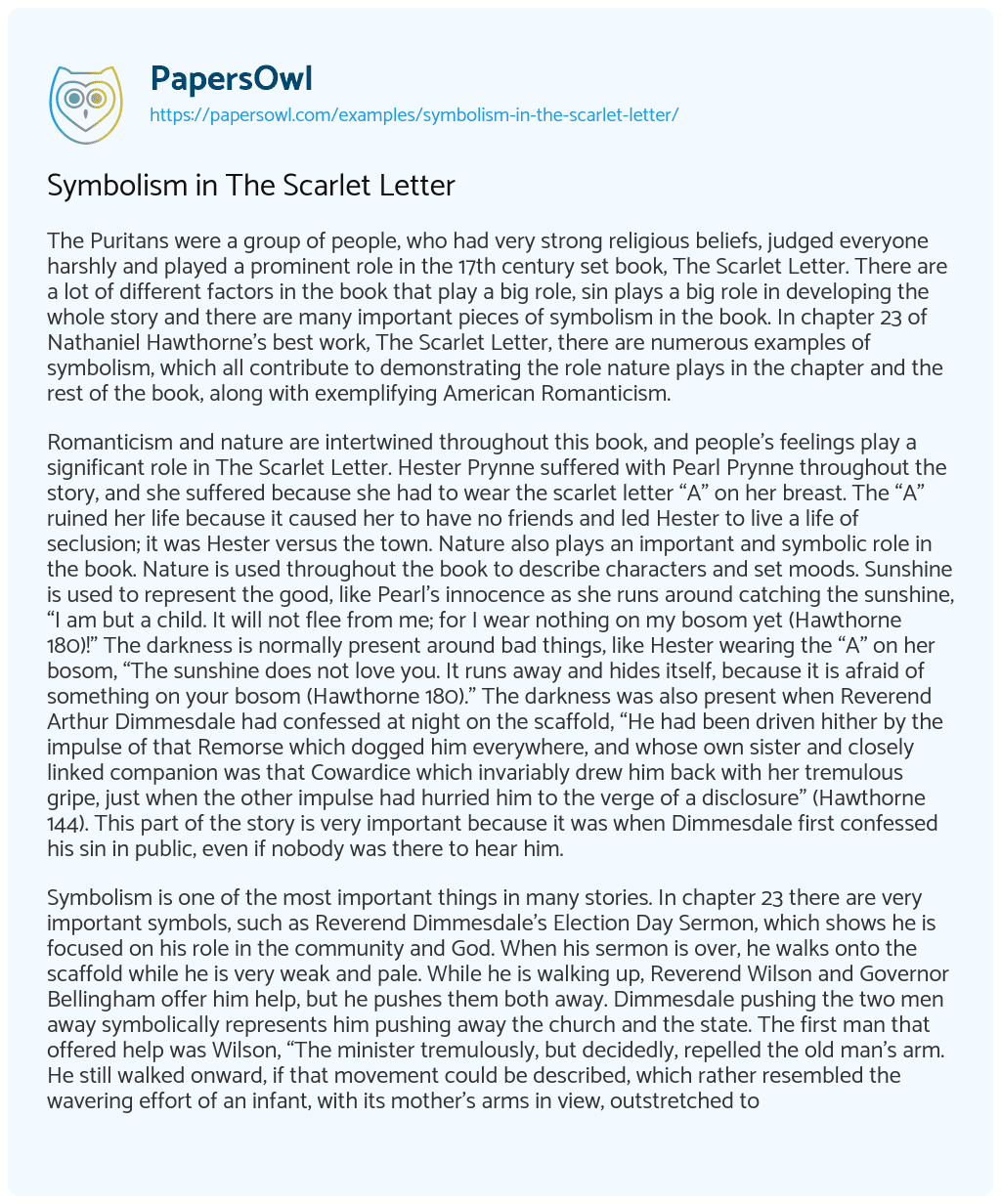 The Puritans were a group of people, who had very strong religious beliefs, judged everyone harshly and played a prominent role in the 17th century set book, The Scarlet Letter. There are a lot of different factors in the book that play a big role, sin plays a big role in developing the whole story and there are many important pieces of symbolism in the book. In chapter 23 of Nathaniel Hawthorne’s best work, The Scarlet Letter, there are numerous examples of symbolism, which all contribute to demonstrating the role nature plays in the chapter and the rest of the book, along with exemplifying American Romanticism.

Romanticism and nature are intertwined throughout this book, and people’s feelings play a significant role in The Scarlet Letter. Hester Prynne suffered with Pearl Prynne throughout the story, and she suffered because she had to wear the scarlet letter “A” on her breast. The “A” ruined her life because it caused her to have no friends and led Hester to live a life of seclusion; it was Hester versus the town. Nature also plays an important and symbolic role in the book. Nature is used throughout the book to describe characters and set moods. Sunshine is used to represent the good, like Pearl’s innocence as she runs around catching the sunshine, “I am but a child. It will not flee from me; for I wear nothing on my bosom yet (Hawthorne 180)!” The darkness is normally present around bad things, like Hester wearing the “A” on her bosom, “The sunshine does not love you. It runs away and hides itself, because it is afraid of something on your bosom (Hawthorne 180).” The darkness was also present when Reverend Arthur Dimmesdale had confessed at night on the scaffold, “He had been driven hither by the impulse of that Remorse which dogged him everywhere, and whose own sister and closely linked companion was that Cowardice which invariably drew him back with her tremulous gripe, just when the other impulse had hurried him to the verge of a disclosure” (Hawthorne 144). This part of the story is very important because it was when Dimmesdale first confessed his sin in public, even if nobody was there to hear him.

Symbolism is one of the most important things in many stories. In chapter 23 there are very important symbols, such as Reverend Dimmesdale’s Election Day Sermon, which shows he is focused on his role in the community and God. When his sermon is over, he walks onto the scaffold while he is very weak and pale. While he is walking up, Reverend Wilson and Governor Bellingham offer him help, but he pushes them both away. Dimmesdale pushing the two men away symbolically represents him pushing away the church and the state. The first man that offered help was Wilson, “The minister tremulously, but decidedly, repelled the old man’s arm. He still walked onward, if that movement could be described, which rather resembled the wavering effort of an infant, with its mother’s arms in view, outstretched to tempt him forward” (Hawthorne 246).

During the climax of the book, Dimmesdale realizes that he cannot save his own life, but he can save Pearl’s by admitting his sin to the town. This is very important because he had been fighting admitting this throughout the whole book. In the beginning of the book, Dimmesdale did not want to admit that he was Pearl’s father to the whole town, but as time went on and Roger Chillingworth continued to hurt him, he decided he needed to tell everybody his sin. Dimmesdale had overcome his fear of confessing. Then, Dimmesdale invites Hester and Pearl onto the scaffold with him and reveals his sin, “With a convulsive motion, he tore away the ministerial band from before his breast. It was revealed (Hawthorne 250)!” While Hester and Pearl stood up on the scaffold with Dimmesdale, Dimmesdale asked Pearl for a kiss because she did not accept Dimmesdale’s kiss previously and she gives him a kiss. When Pearl kisses Dimmesdale, it symbolizes that she forgives him and accepts him as her father, “ “Dear little Pearl, wilt thou kiss me now? Thou wouldst not, yonder, in the forest! But now thou wilt!” Pearl kissed his lips. A spell was broken” (Hawthorne 251).

Nathaniel Hawthorne’s, The Scarlet Letter, has lots of symbolism and nature plays a big role, which all contribute to the book being an American Romanticism. It is an example of American Romanticism because it uses the individual person and their feelings. Another way the book is considered to be an American Romanticism is because revenge plays a role, Chillingworth was so focused throughout the book to get revenge on Dimmesdale, which is a huge sin and Chillingworth was going to die a sinner. Dimmesdale makes a huge transformation through the book, from being scared to admit he was the father of Pearl, to proudly admitting he was. The book is a great, old piece of American Literature and will continue to be analyzed and read for years.

Symbolism in The Scarlet Letter. (2021, Apr 19). Retrieved from https://papersowl.com/examples/symbolism-in-the-scarlet-letter/

The Scaffold in the Scarlet Letter