Comparing the Great Gatsby and the Scarlet Letter 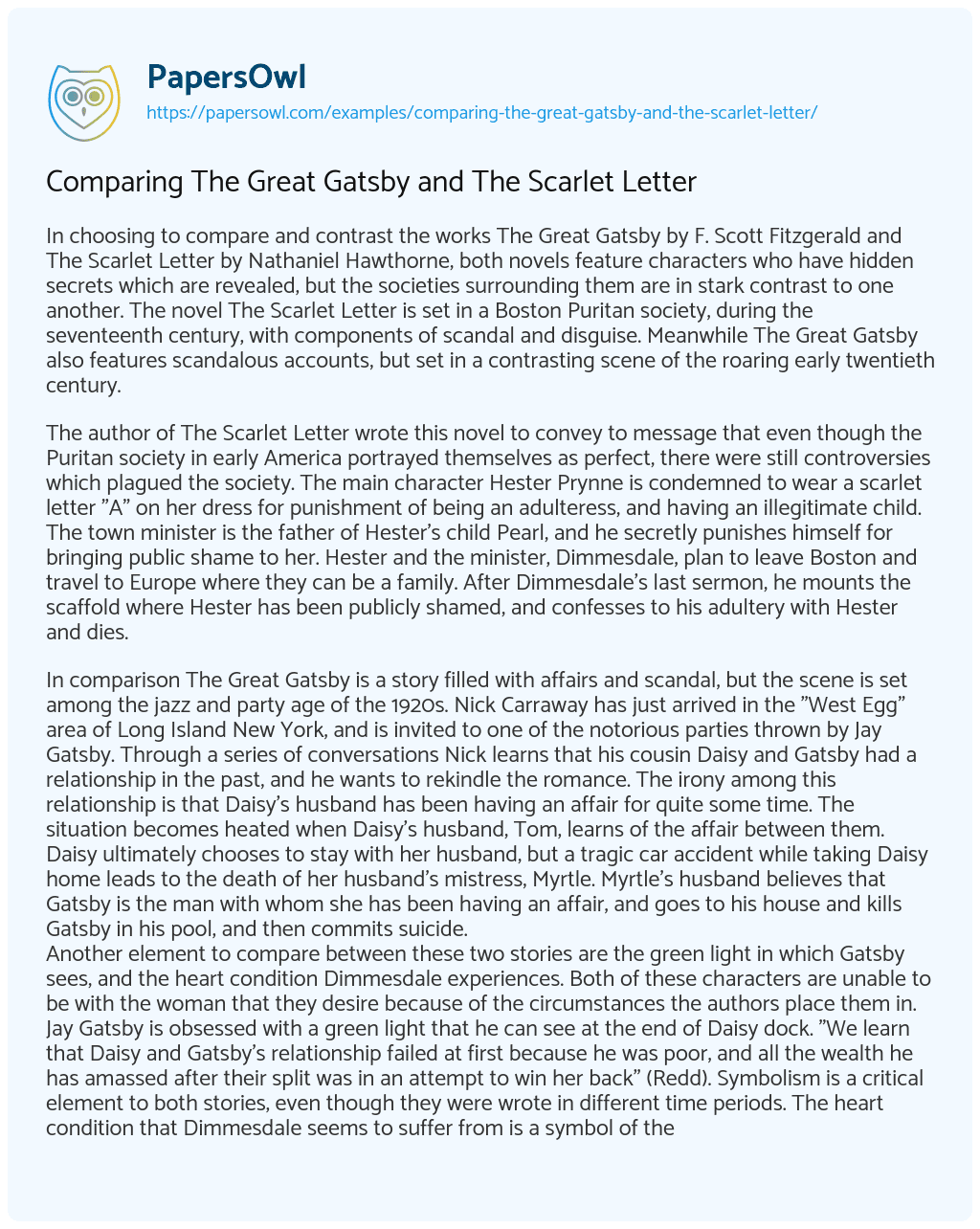 In choosing to compare and contrast the works The Great Gatsby by F. Scott Fitzgerald and The Scarlet Letter by Nathaniel Hawthorne, both novels feature characters who have hidden secrets which are revealed, but the societies surrounding them are in stark contrast to one another. The novel The Scarlet Letter is set in a Boston Puritan society, during the seventeenth century, with components of scandal and disguise. Meanwhile The Great Gatsby also features scandalous accounts, but set in a contrasting scene of the roaring early twentieth century.

The author of The Scarlet Letter wrote this novel to convey to message that even though the Puritan society in early America portrayed themselves as perfect, there were still controversies which plagued the society. The main character Hester Prynne is condemned to wear a scarlet letter “A” on her dress for punishment of being an adulteress, and having an illegitimate child. The town minister is the father of Hester’s child Pearl, and he secretly punishes himself for bringing public shame to her. Hester and the minister, Dimmesdale, plan to leave Boston and travel to Europe where they can be a family. After Dimmesdale’s last sermon, he mounts the scaffold where Hester has been publicly shamed, and confesses to his adultery with Hester and dies.

In comparison The Great Gatsby is a story filled with affairs and scandal, but the scene is set among the jazz and party age of the 1920s. Nick Carraway has just arrived in the “West Egg” area of Long Island New York, and is invited to one of the notorious parties thrown by Jay Gatsby. Through a series of conversations Nick learns that his cousin Daisy and Gatsby had a relationship in the past, and he wants to rekindle the romance. The irony among this relationship is that Daisy’s husband has been having an affair for quite some time. The situation becomes heated when Daisy’s husband, Tom, learns of the affair between them. Daisy ultimately chooses to stay with her husband, but a tragic car accident while taking Daisy home leads to the death of her husband’s mistress, Myrtle. Myrtle’s husband believes that Gatsby is the man with whom she has been having an affair, and goes to his house and kills Gatsby in his pool, and then commits suicide.
Another element to compare between these two stories are the green light in which Gatsby sees, and the heart condition Dimmesdale experiences. Both of these characters are unable to be with the woman that they desire because of the circumstances the authors place them in. Jay Gatsby is obsessed with a green light that he can see at the end of Daisy dock. “We learn that Daisy and Gatsby’s relationship failed at first because he was poor, and all the wealth he has amassed after their split was in an attempt to win her back” (Redd). Symbolism is a critical element to both stories, even though they were wrote in different time periods. The heart condition that Dimmesdale seems to suffer from is a symbol of the sin and guilt that he feels after his affair with Hester. While standing on the scaffold confessing, Dimmesdale rips his shirt open to reveal a letter “A” on his chest. This can be said that he shares the guilt and punishment with his mistress Hester.

The contrasting elements of these two novels are the setting which the authors write them in. The Scarlet Letter is set in the rigid Puritan society of Boston during the seventeenth century. The Puritans came from England to escape the prejudices and adversity they experienced from the Catholics. They adhered to a strict doctrine of religion and moral conduct among themselves, and in their governance. Members of their society found guilty of committing a crime, such as Hester, were subject to public punishment. F. Scott Fitzgerald wrote The Great Gatsby in a polarizing setting of the roaring 1920s. During this time America was experiencing great prosperity after World War I. Cities grew with the expansion of the industrial revolution, and the “American Dream” became a term used for a consumer society. Young people who came from wealth and prosperity attended lavish parties, such as those thrown by Jay Gatsby. The traditions and culture of American society was changing at a fast pace, and this lead to what would be known as “The Great Depression.” This can be a use of symbolism in the death of Gatsby, signaling the death of the “American Dream”, during the tough times of the late 1920s and 1930s. These novels portray two different forms of society in American history.

In conclusion, the characters in both novels struggle with scandal, affairs, and dealing with their past. Hester and Dimmesdale from The Scarlet Letter live with their affair which leads to the public and private punishment of both parties, and eventual death of Dimmesdale. The entire novel The Great Gatsby is covered with scandals and affairs, which ends in the death of Jay Gatsby. The societies which surround the characters are polarizing from the rigid religious Puritan society, and the lifestyle of the wealthy and powerful of the roaring 1920s.

Comparing The Great Gatsby and The Scarlet Letter. (2019, Mar 11). Retrieved from https://papersowl.com/examples/comparing-the-great-gatsby-and-the-scarlet-letter/