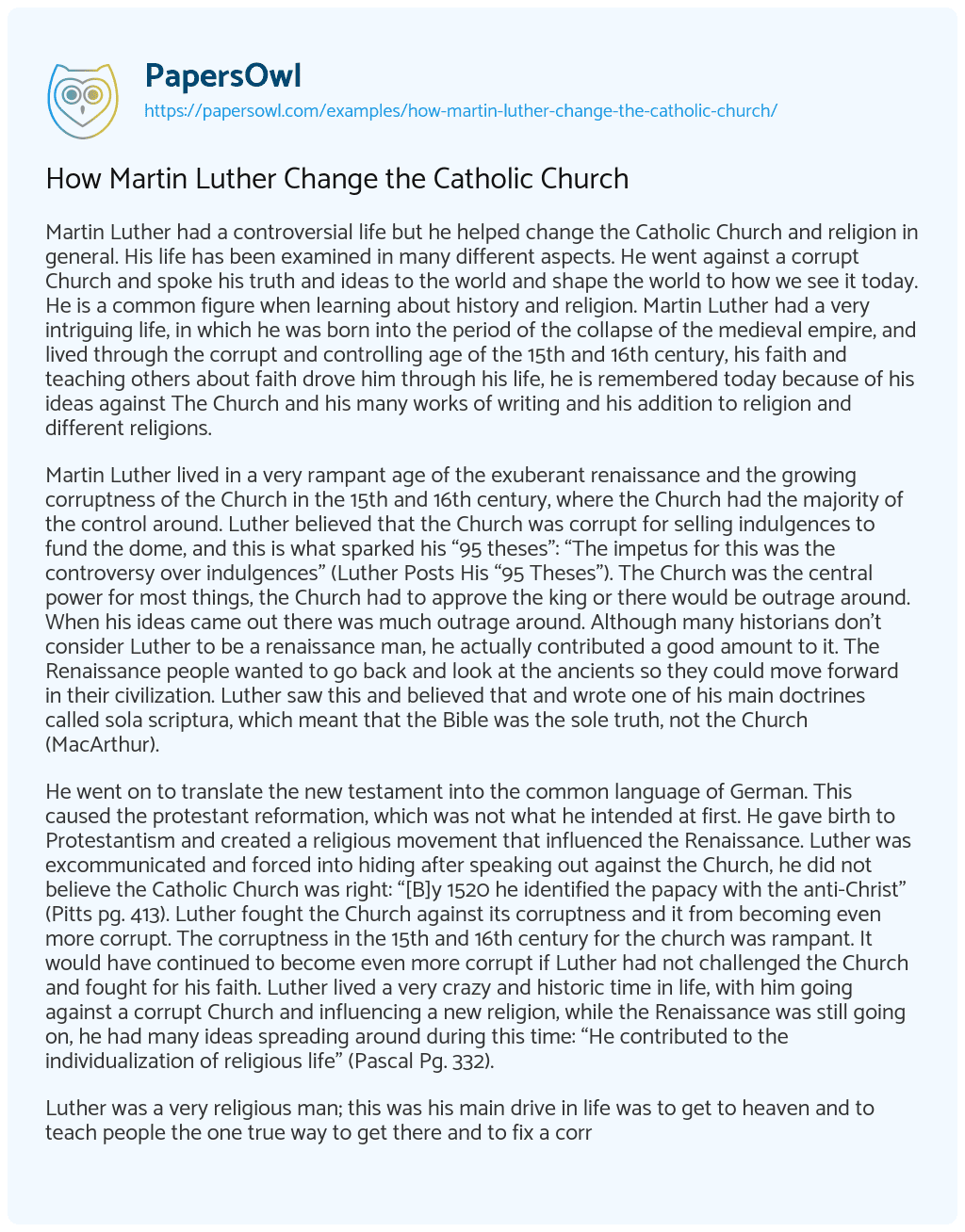 Martin Luther had a controversial life but he helped change the Catholic Church and religion in general. His life has been examined in many different aspects. He went against a corrupt Church and spoke his truth and ideas to the world and shape the world to how we see it today. He is a common figure when learning about history and religion. Martin Luther had a very intriguing life, in which he was born into the period of the collapse of the medieval empire, and lived through the corrupt and controlling age of the 15th and 16th century, his faith and teaching others about faith drove him through his life, he is remembered today because of his ideas against The Church and his many works of writing and his addition to religion and different religions.

Martin Luther lived in a very rampant age of the exuberant renaissance and the growing corruptness of the Church in the 15th and 16th century, where the Church had the majority of the control around. Luther believed that the Church was corrupt for selling indulgences to fund the dome, and this is what sparked his “95 theses”: “The impetus for this was the controversy over indulgences” (Luther Posts His “95 Theses”). The Church was the central power for most things, the Church had to approve the king or there would be outrage around. When his ideas came out there was much outrage around. Although many historians don’t consider Luther to be a renaissance man, he actually contributed a good amount to it. The Renaissance people wanted to go back and look at the ancients so they could move forward in their civilization. Luther saw this and believed that and wrote one of his main doctrines called sola scriptura, which meant that the Bible was the sole truth, not the Church (MacArthur).

He went on to translate the new testament into the common language of German. This caused the protestant reformation, which was not what he intended at first. He gave birth to Protestantism and created a religious movement that influenced the Renaissance. Luther was excommunicated and forced into hiding after speaking out against the Church, he did not believe the Catholic Church was right: “[B]y 1520 he identified the papacy with the anti-Christ” (Pitts pg. 413). Luther fought the Church against its corruptness and it from becoming even more corrupt. The corruptness in the 15th and 16th century for the church was rampant. It would have continued to become even more corrupt if Luther had not challenged the Church and fought for his faith. Luther lived a very crazy and historic time in life, with him going against a corrupt Church and influencing a new religion, while the Renaissance was still going on, he had many ideas spreading around during this time: “He contributed to the individualization of religious life” (Pascal Pg. 332).

Luther was a very religious man; this was his main drive in life was to get to heaven and to teach people the one true way to get there and to fix a corrupt organization. Luther was always a religious man starting with when he got caught up in a great storm and St. Anna came down and told him if he became a monk he would survive, and he never looked back and kept his faith from there on. He was so devoted to his faith that he believed everyone should be able to find the true meaning behind the texts thus translating the Bible into German so that people could find the true meaning behind the scriptures: “Germany’s most famous Bible translator”, he is the most famous translator of the Bible and the most accurate(Kelling pg. 132). Him translating the bible lead to the protestant reformation and the creation of Protestantism, as stated before. Luther believed that the Bible was the sole truth and not what the Church taught.

Luther taught people that the Bible is the central source of religious authority and that salvation is reached through faith and not deeds, which shaped the core of Protestantism. Lutheranism also believes all of his ideas because the religion was founded on Luther’s ideas and Luther himself founded this religion to reform the Western Church to a more biblical foundation. The reason why Luther wrote his “95 theses” was he believed the Church was going against God and straying away from what God intended: “It is certain that when money clinks in the money chest, greed and avarice can be increased; but when the church intercedes, the result is in the hands of God alone”(Luther). The Church was straying from God in Luther’s eyes. As stated, before he believed that the only way to get to salvation is through faith and faith alone. The was Luther’s main idea, he did not believe in getting salvation through “prayer, fasting, pilgrimages, relics, giving to the poor, the sacraments, or any action that a person can take”- Luther. This was his way of teaching and pushing what he believed in to benefit the people around.

Luther is remembered to this day because of how he defied the Church and translated the Bible into German giving people their own way to think and helped lead to many protestants Christian Faiths. Most people know of Luther because of how he hammered his “95 theses” to the Church door, though it did not go down exactly like this, he went against how the Church thought: “Lastly, Luther argued that the pope does not have any power over purgatory. If we believe that the pope does, argued Luther, it raises the uncomfortable question of why he does not simply empty purgatory for the sake of mercy, rather than demanding a fee” (Kilcrease). He spoke out against the Church in a time where that was harshly punishable. He was lucky not to be killed. He believed it was not right for the Church to say the only way to get to salvation in through paying fees and going with everything the Church says. After speaking out against the Church Luther was forced into hiding with the help of German princes, but while hiding he translated the Bible into German and everybody had a chance to interpret what the scriptures meant which started a reformation: “In my translation of the Bible I strove to use pure and intelligible German”, before there were poor inaccurate translations(Luther, An Open Letter on Translating pg. 3). He believed everyone should find the true meaning behind the scripture, he wanted people to find that faith is the only way to get to salvation and that the Bible is the sole truth and not the Church. His ideas sparked outrage within the Church: “The Catholic interprets him as a gesture of anarchy”, but him translating the Bible started a reformation of the protestants (Pascal pg. 332). Although this reformation and uprising were not Luther’s first ideas when he translated the bible and posted his “95 theses”, but his ideas added to the protestant religion. His ideas spread like wildfire, and was not just in Germany, but broke out in countries around. His main beliefs on the bible being the sole truth and not the pope. Although the faith alone is still being debated to this day, some protestants believe in this, but this idea attracted 16th-century listeners. Older protestants know more about Luther’s teaching while younger ones don’t understand them as much. Luther has influenced how we see religion and influenced many religions around and even has a religion named after him.

Martin Luther will be remembered for future classes and his ideas will still be used against the Church today. While living in a time where speaking against the Church was deathly, he helped set up the Church today and helped slow down the corruption within the Church by speaking out with his “95 theses” and going against indulgences, he influenced religion and different religions around. His main goal in life was to teach that faith and faith alone is the only true way to get to Heaven. Martin Luther is undoubtedly one of the most influential figures in Western civilization during the last millennium and still has an influence on the world around us now.