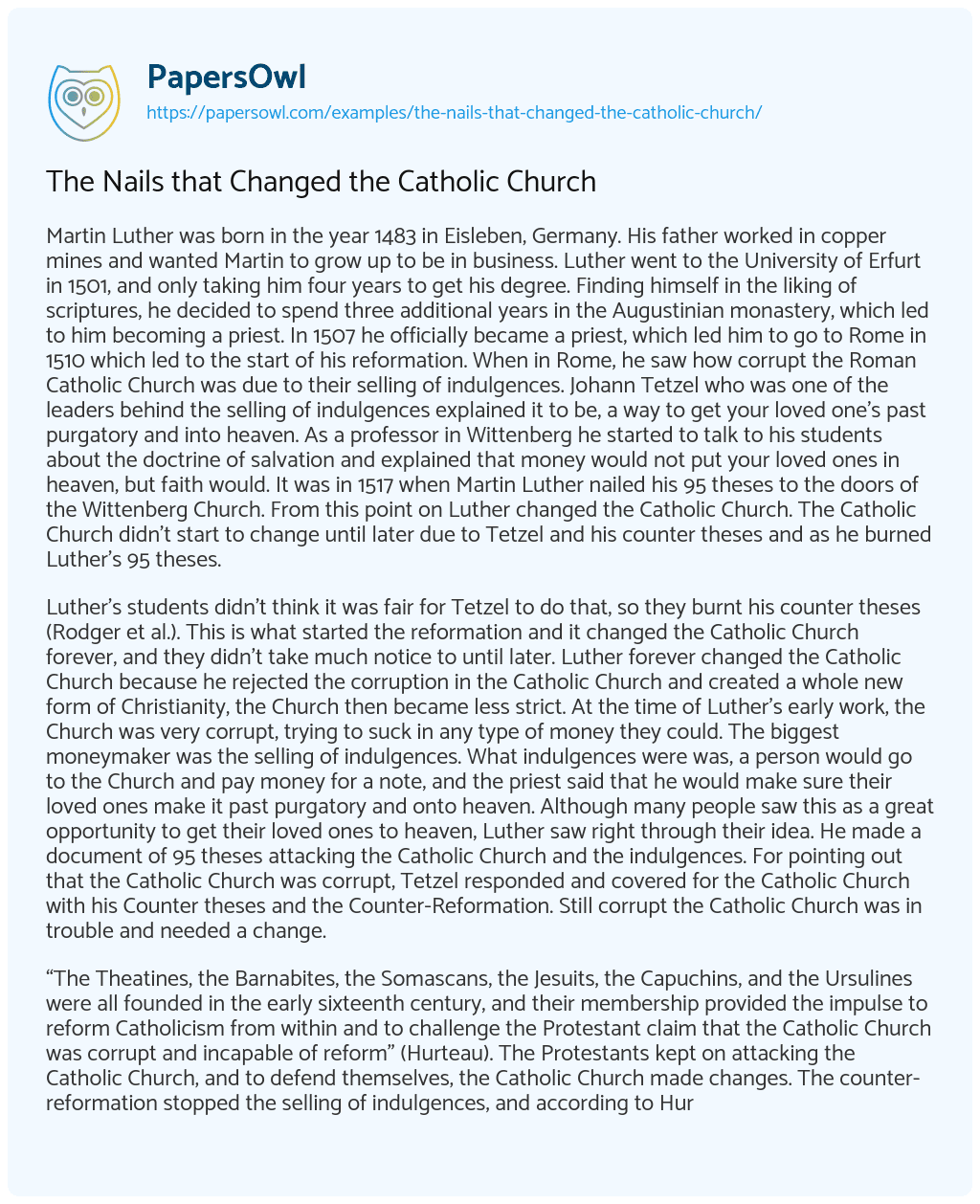 Martin Luther was born in the year 1483 in Eisleben, Germany. His father worked in copper mines and wanted Martin to grow up to be in business. Luther went to the University of Erfurt in 1501, and only taking him four years to get his degree. Finding himself in the liking of scriptures, he decided to spend three additional years in the Augustinian monastery, which led to him becoming a priest. In 1507 he officially became a priest, which led him to go to Rome in 1510 which led to the start of his reformation. When in Rome, he saw how corrupt the Roman Catholic Church was due to their selling of indulgences. Johann Tetzel who was one of the leaders behind the selling of indulgences explained it to be, a way to get your loved one’s past purgatory and into heaven. As a professor in Wittenberg he started to talk to his students about the doctrine of salvation and explained that money would not put your loved ones in heaven, but faith would. It was in 1517 when Martin Luther nailed his 95 theses to the doors of the Wittenberg Church. From this point on Luther changed the Catholic Church. The Catholic Church didn’t start to change until later due to Tetzel and his counter theses and as he burned Luther’s 95 theses.

“The Theatines, the Barnabites, the Somascans, the Jesuits, the Capuchins, and the Ursulines were all founded in the early sixteenth century, and their membership provided the impulse to reform Catholicism from within and to challenge the Protestant claim that the Catholic Church was corrupt and incapable of reform” (Hurteau). The Protestants kept on attacking the Catholic Church, and to defend themselves, the Catholic Church made changes. The counter-reformation stopped the selling of indulgences, and according to Hurteau, it brought a time of religious art that was “linked to life of faith”. This was only part of Luther’s goal as he wanted more than just an internal change. Luther wanted the best for the people, and he didn’t think it was fair that they were being brainwashed to giving all their money away. The Protestant branch of Christianity gave new opportunity to the people, where it differed from the Catholic branch with some small differences. Not only did it affect the religion itself, but “The Protestant Reformation transformed European social, economic, and religious life, especially in regard to the Iberian Peninsula and its relations with its American colonies” “As a result of the Lutheran reforms, Europe plunged into a profound religious and economic crisis” (“Protestant Reformation”).

This allowed for more people to see how the Protestant branch was legit, and the ideas were starting to be accepted. This was not good for the Catholic Church, because as more people started moving toward Protestantism, and as Europe was in a crisis, they needed to make changes they didn’t want to make, to bring more people back. Before Luther corrected the Catholic Church on their faults and changed it, the church was very strict. They had all these rules, and would even brainwash their followers into giving money. “Catholicism today has a very optimistic view of creation and the human person. Creation and the human person are seen as fundamentally good. This has not always been the case. There have been points in history when the human person and the world were seen as being evil or corrupt. Only the spiritual was to be encouraged, not the body, worldliness, or sensuality” (O’Leary). Although Martin’s main goal was to have most people convert to Protestantism, he realized that he wouldn’t get everyone, so he tried to make their life better. The Catholic Church was being pressured by Luther and his reformation, so in order for it’s people to stay, it needed to change in a way the people wanted it to. This changed the Catholic Church forever, because many more people enjoyed it and how it became less strict. According to O’Leary, the Catholic Church never went back as it started to accept the idea of music, art, and painting.

The Nails that Changed the Catholic Church. (2021, Jul 01). Retrieved from https://papersowl.com/examples/the-nails-that-changed-the-catholic-church/