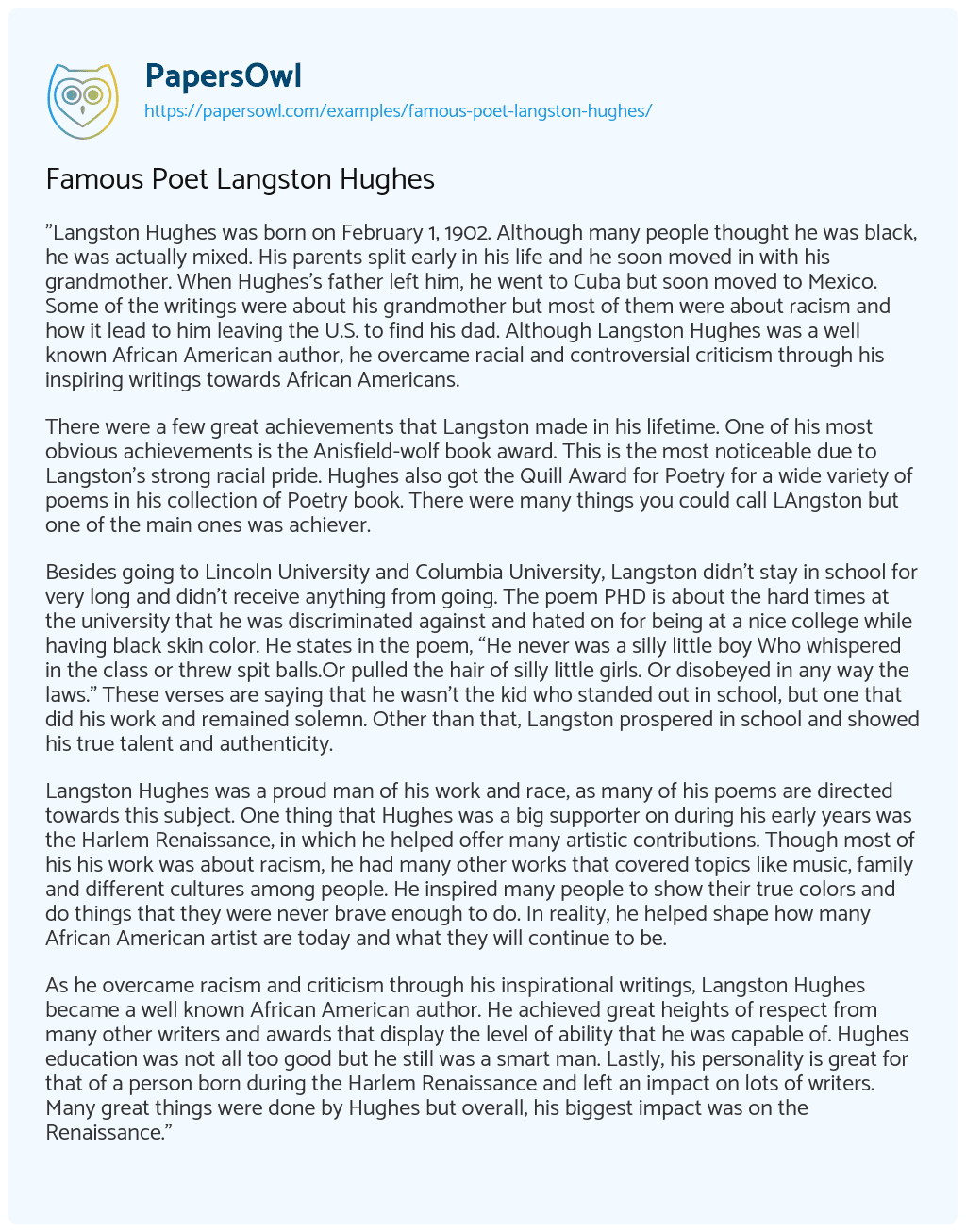 “Langston Hughes was born on February 1, 1902. Although many people thought he was black, he was actually mixed. His parents split early in his life and he soon moved in with his grandmother. When Hughes’s father left him, he went to Cuba but soon moved to Mexico. Some of the writings were about his grandmother but most of them were about racism and how it lead to him leaving the U.S. to find his dad. Although Langston Hughes was a well known African American author, he overcame racial and controversial criticism through his inspiring writings towards African Americans.

There were a few great achievements that Langston made in his lifetime. One of his most obvious achievements is the Anisfield-wolf book award. This is the most noticeable due to Langston’s strong racial pride. Hughes also got the Quill Award for Poetry for a wide variety of poems in his collection of Poetry book. There were many things you could call LAngston but one of the main ones was achiever.

Besides going to Lincoln University and Columbia University, Langston didn’t stay in school for very long and didn’t receive anything from going. The poem PHD is about the hard times at the university that he was discriminated against and hated on for being at a nice college while having black skin color. He states in the poem, “He never was a silly little boy Who whispered in the class or threw spit balls.Or pulled the hair of silly little girls. Or disobeyed in any way the laws.” These verses are saying that he wasn’t the kid who standed out in school, but one that did his work and remained solemn. Other than that, Langston prospered in school and showed his true talent and authenticity.

Langston Hughes was a proud man of his work and race, as many of his poems are directed towards this subject. One thing that Hughes was a big supporter on during his early years was the Harlem Renaissance, in which he helped offer many artistic contributions. Though most of his his work was about racism, he had many other works that covered topics like music, family and different cultures among people. He inspired many people to show their true colors and do things that they were never brave enough to do. In reality, he helped shape how many African American artist are today and what they will continue to be.

As he overcame racism and criticism through his inspirational writings, Langston Hughes became a well known African American author. He achieved great heights of respect from many other writers and awards that display the level of ability that he was capable of. Hughes education was not all too good but he still was a smart man. Lastly, his personality is great for that of a person born during the Harlem Renaissance and left an impact on lots of writers. Many great things were done by Hughes but overall, his biggest impact was on the Renaissance.”