A Poetry Analysis: the Solitary Reaper 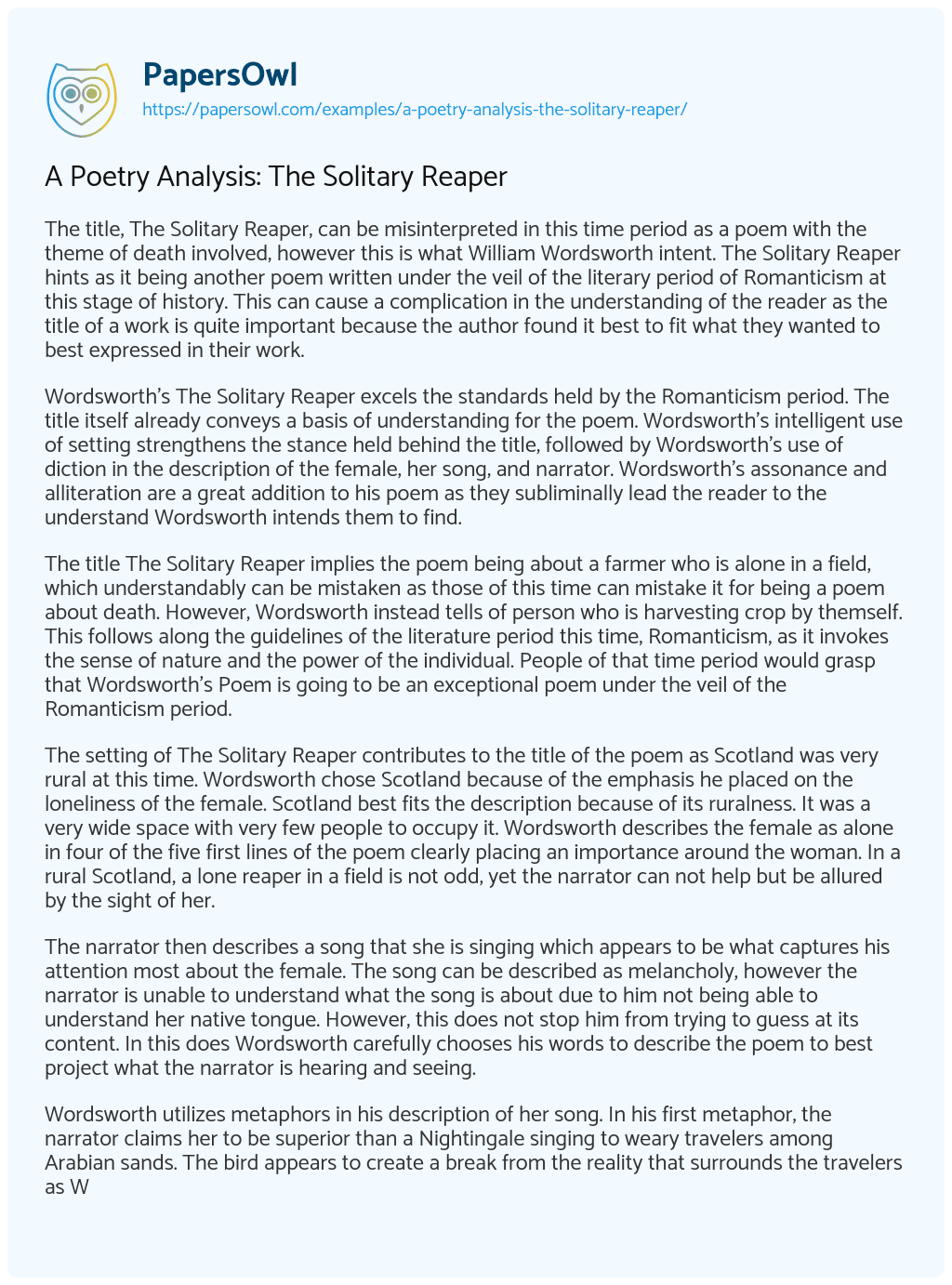 The title, The Solitary Reaper, can be misinterpreted in this time period as a poem with the theme of death involved, however this is what William Wordsworth intent. The Solitary Reaper hints as it being another poem written under the veil of the literary period of Romanticism at this stage of history. This can cause a complication in the understanding of the reader as the title of a work is quite important because the author found it best to fit what they wanted to best expressed in their work.

Wordsworth’s The Solitary Reaper excels the standards held by the Romanticism period. The title itself already conveys a basis of understanding for the poem. Wordsworth’s intelligent use of setting strengthens the stance held behind the title, followed by Wordsworth’s use of diction in the description of the female, her song, and narrator. Wordsworth’s assonance and alliteration are a great addition to his poem as they subliminally lead the reader to the understand Wordsworth intends them to find.

The title The Solitary Reaper implies the poem being about a farmer who is alone in a field, which understandably can be mistaken as those of this time can mistake it for being a poem about death. However, Wordsworth instead tells of person who is harvesting crop by themself. This follows along the guidelines of the literature period this time, Romanticism, as it invokes the sense of nature and the power of the individual. People of that time period would grasp that Wordsworth’s Poem is going to be an exceptional poem under the veil of the Romanticism period.

The setting of The Solitary Reaper contributes to the title of the poem as Scotland was very rural at this time. Wordsworth chose Scotland because of the emphasis he placed on the loneliness of the female. Scotland best fits the description because of its ruralness. It was a very wide space with very few people to occupy it. Wordsworth describes the female as alone in four of the five first lines of the poem clearly placing an importance around the woman. In a rural Scotland, a lone reaper in a field is not odd, yet the narrator can not help but be allured by the sight of her.

The narrator then describes a song that she is singing which appears to be what captures his attention most about the female. The song can be described as melancholy, however the narrator is unable to understand what the song is about due to him not being able to understand her native tongue. However, this does not stop him from trying to guess at its content. In this does Wordsworth carefully chooses his words to describe the poem to best project what the narrator is hearing and seeing.

Wordsworth utilizes metaphors in his description of her song. In his first metaphor, the narrator claims her to be superior than a Nightingale singing to weary travelers among Arabian sands. The bird appears to create a break from the reality that surrounds the travelers as Wordsworth describes its tone to be welcoming which helps with the reader’s understand of the effect of the female reaper’s song on the narrator. The song is not necessarily sad in the way of regret, but in a thoughtful aspect. The second metaphor Wordsworth places in the same stanza supports this claim as the narrator believes that the music of a Cuckoo-bird that breaks the silence of the ocean does not compare to the sing of the woman. In the might of the ocean, such trivial things as a Cuckoo-bird does not seem to be of any importance, yet it remains to be as the effect it can have on the perspective. These metaphors reveals the narrator’s belief of the song as he is enticed by its beauty. These common objects have meaning such as this song does in the field of Scotland.

Wordsworth keys in alliteration in his metaphors to create a smooth pleasant sound to the reader as to add focus to its effects on the narrator. This adds on the importance of the stanzas as the reader has an idea of what the narrator is hearing, but it strengthens their understand furthermore.

The theme of the poem, looking at everyday events with major importance through the imagination, already appears in the very first two stanzas of the poem through the descriptions of the song and it later appears once again in the narrators assumption of the content of it. The narrator wonders if it is about unhappy events and battles that have taken place long ago or if it is about the abundance of days that we go through the motions of. Either route the narrator takes on the song, such as the songs of birds have meaning, so do these perceptions of the song have meaning to the theme.

The battles and unhappy events that took place are what affects her culture and land to that day. Those events are a part of her heritage and even though they are just few among the history of the world, they are important to her and her land. In the days that seem to blend in, that is where we do not advance in our life. It is those days that become numerous where we allow ourselves to place our hopes and dreams on hold. These days appear to be every once in a while or of no importance, but these days soon combine and become numerous and we never realizes its effect on us until it is too late.

This is what places an importance of the female reaper. She sings a song of mystery as she reaps. It can even appear as ironic as she is reaping what she has sown while singing a song about what the author believes to be reaping what you have sown. This also supports the theme as we should have moments in our life when we consider to the minor things to be as important as major things. Also herself is crucial to the song as she is alone in the field and she does not have to work since no one is there to hold her accountable, yet she continues to reap because she herself is aware of what is considered as minor work can amount to.

Wordsworth’s theme is reinforced through the utilization of assonance. Assonance is evident in the second and third stanzas and it creates an effect as it creates a flow in the poem that follows the mood of the narrator. The narrator is so charmed by this female that he does not mention what he is doing there or if he has anywhere to be. In fact, not much is given in the description about the narrator besides the fact that he is alone in the field too. That is why assonance reinforces the attention to small details in its effect it creates by increasing the length of the pronunciation of words carefully chosen by the author to make aware of how the narrator is lengthening his stay in that place.

The theory of death being involved in the poem due to the use of the word reaper in the title can be quite detrimental to the reading of the poem as the theme of death would be sought out in it. In any analysis.

Overall, Wordsworth keys in literary devices and diction for an important reason as all tremendous authors know that their words can have such an effect on their works. Wordsworth’s choice to use these literary tools were important to his theme as only he can express what is inside of his mind and he did so with such expertise that can only be mirrored by significant poets in history.

In The Solitary Reaper, Wordsworth remains true to the standards of his writing as he expertly writes to spread his understanding of love for nature. Wordsworth’s works lay crucial role in the historic period of Romanticism which is why it surrounds the title with much importance as people of that time period would instantly know that Wordsworth created another classic under his love for nature and the individual’s capability of being a part of it.

A Poetry Analysis: The Solitary Reaper. (2022, Aug 20). Retrieved from https://papersowl.com/examples/a-poetry-analysis-the-solitary-reaper/

“I, Too” by Langston Hughes Poetry Analysis

My Poetry Analysis of i have a Dream Speech by Dr. Martin Luther King Jr and Frances Ellen Watkins Harper’s Poem “The Slave Auction”

A Significant Role in the Poetry of Nature, Creativity, and Imagination in the Eighteenth Century