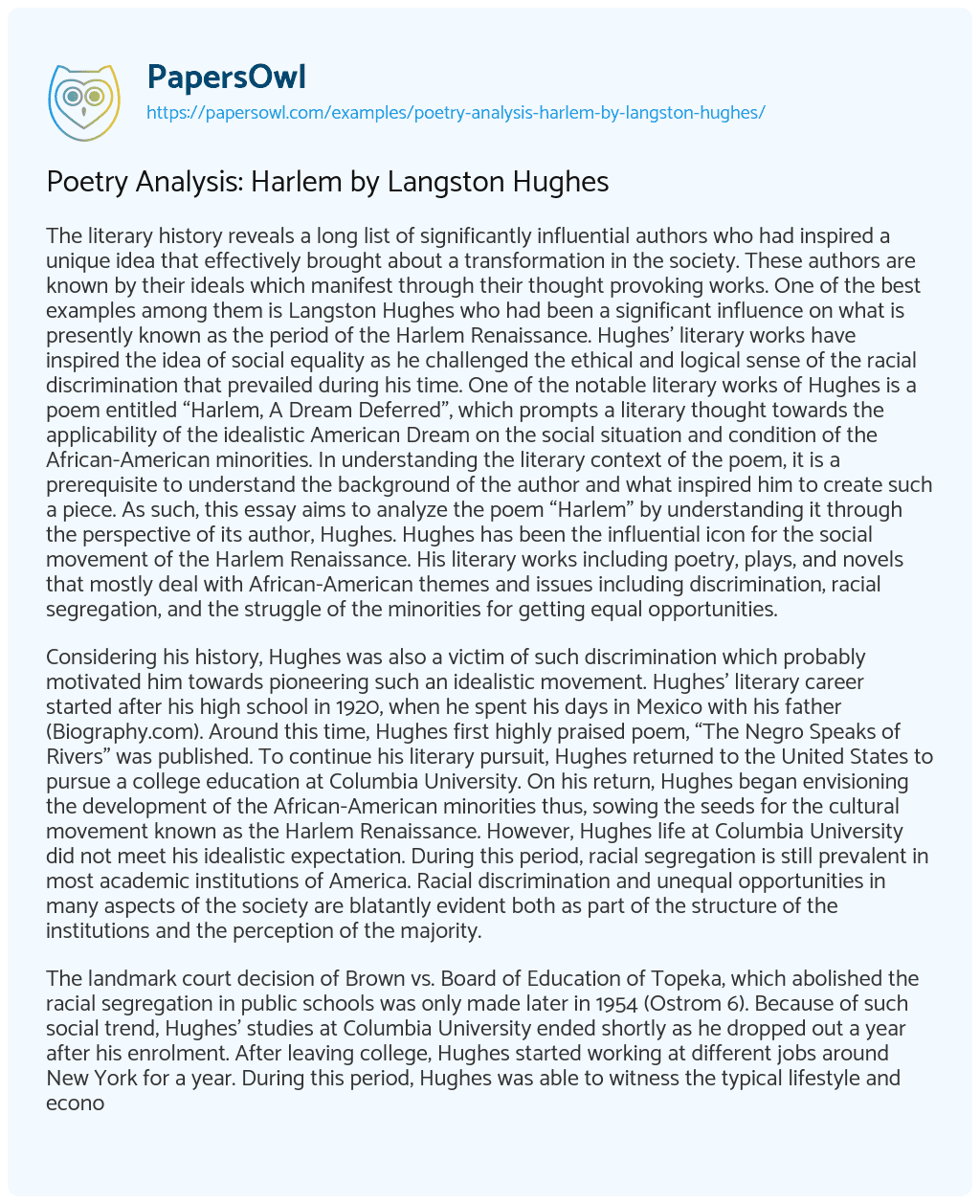 The literary history reveals a long list of significantly influential authors who had inspired a unique idea that effectively brought about a transformation in the society. These authors are known by their ideals which manifest through their thought provoking works. One of the best examples among them is Langston Hughes who had been a significant influence on what is presently known as the period of the Harlem Renaissance. Hughes’ literary works have inspired the idea of social equality as he challenged the ethical and logical sense of the racial discrimination that prevailed during his time. One of the notable literary works of Hughes is a poem entitled “Harlem, A Dream Deferred”, which prompts a literary thought towards the applicability of the idealistic American Dream on the social situation and condition of the African-American minorities. In understanding the literary context of the poem, it is a prerequisite to understand the background of the author and what inspired him to create such a piece. As such, this essay aims to analyze the poem “Harlem” by understanding it through the perspective of its author, Hughes. Hughes has been the influential icon for the social movement of the Harlem Renaissance. His literary works including poetry, plays, and novels that mostly deal with African-American themes and issues including discrimination, racial segregation, and the struggle of the minorities for getting equal opportunities.

Considering his history, Hughes was also a victim of such discrimination which probably motivated him towards pioneering such an idealistic movement. Hughes’ literary career started after his high school in 1920, when he spent his days in Mexico with his father (Biography.com). Around this time, Hughes first highly praised poem, “The Negro Speaks of Rivers” was published. To continue his literary pursuit, Hughes returned to the United States to pursue a college education at Columbia University. On his return, Hughes began envisioning the development of the African-American minorities thus, sowing the seeds for the cultural movement known as the Harlem Renaissance. However, Hughes life at Columbia University did not meet his idealistic expectation. During this period, racial segregation is still prevalent in most academic institutions of America. Racial discrimination and unequal opportunities in many aspects of the society are blatantly evident both as part of the structure of the institutions and the perception of the majority.

The landmark court decision of Brown vs. Board of Education of Topeka, which abolished the racial segregation in public schools was only made later in 1954 (Ostrom 6). Because of such social trend, Hughes’ studies at Columbia University ended shortly as he dropped out a year after his enrolment. After leaving college, Hughes started working at different jobs around New York for a year. During this period, Hughes was able to witness the typical lifestyle and economic status of the African-American minorities. He witnessed the limited opportunity for many of his racial group regardless of their diligence and effort towards pursuing the idealistic American dream in terms of both economic and civil development. However, such issues did not hamper much of Hughes’ determination as he was signed on as a steward on a freighter in 1923, giving him the opportunity to travel to Africa and Spain (Biography.com). After a year, Hughes remained briefly in Paris and was able to immerse himself in the culture of a liberal country which further inspired him and gave him more insights on his ideals. It is evident from his background that much of Hughes’ inspiration for his poem Harlem was from his actual experiences within a racially oppressive society ruled by the white majority. As such, the aforementioned literary piece is often interpreted as an inquisitive exposition to society regarding an idealistic dream that has been deferred.

In understanding the poem, it is important to consider the language used by the author to develop the context of his work. In this concern, the word deferred means delayed or postponed; thus reflecting the determination of the African American minorities to pursue their dreams inspite of the threats they face in the society. Their mission is however hampered by the racial issue thus, creating the unethical scenario of the unequal applicability of the ideal American dream to the white social majority and the African-American minority. Further, Hughes uses different illustrative metaphors to depict his interpretations on the deferred dream. His line “Does it dry up like a raisin in the sun?” implies that a person’s dream is dried when constantly battered by challenges and deferred due to social circumstances (Poetry Foundation). On his second metaphor, Hughes also compared a deferred dream as something that could “fester like a sore” implying that such a state can have negative consequences on the determination of a person. In this context, when a person’s dreams are repeatedly deferred, they may weaken the zeal and interest of the person in life similar to how a festering sore affects the health of a person. Likewise, the fourth metaphor of the poem compares the deferred dream to “a heavy load” which burdens a person until he becomes tired runs out of all his enthusiasm in life. Most likely, Hughes drew such metaphors based on his experiences at his college and work.

Considering the notion implied by Hughes, it is evident that he is advocating a social state that is devoid of the racial discrimination and segregation in a soceity that incessantly defer the idealistic dream of the oppressed African-American minorities. As Hughes referred to the dream as a live concept, it is important for the society to nourish it unless it becomes a “rotten meat” that can produce a contagious illness of negativity and weakness (Miller 34). On the other hand, Hughes last line of the poem creates a prophetic statement towards the likely outcome of the social scenario of rampant discrimination. His line “or does it explode” implies the likely result of culmination of the interest of the minorities. This forceful trend is compared to a bomb that would shatter the prevailing unethical circumstance. This is likely a reference to the upcoming events such as the Harlem Renaissance and the case of Brown vs. Board of Directors, among others. In these circumstances, the deferred dreams become the inspiration and motivation of the oppressed for their collective movement.

The Use of Symbols in Langston Hughes’ Harlem