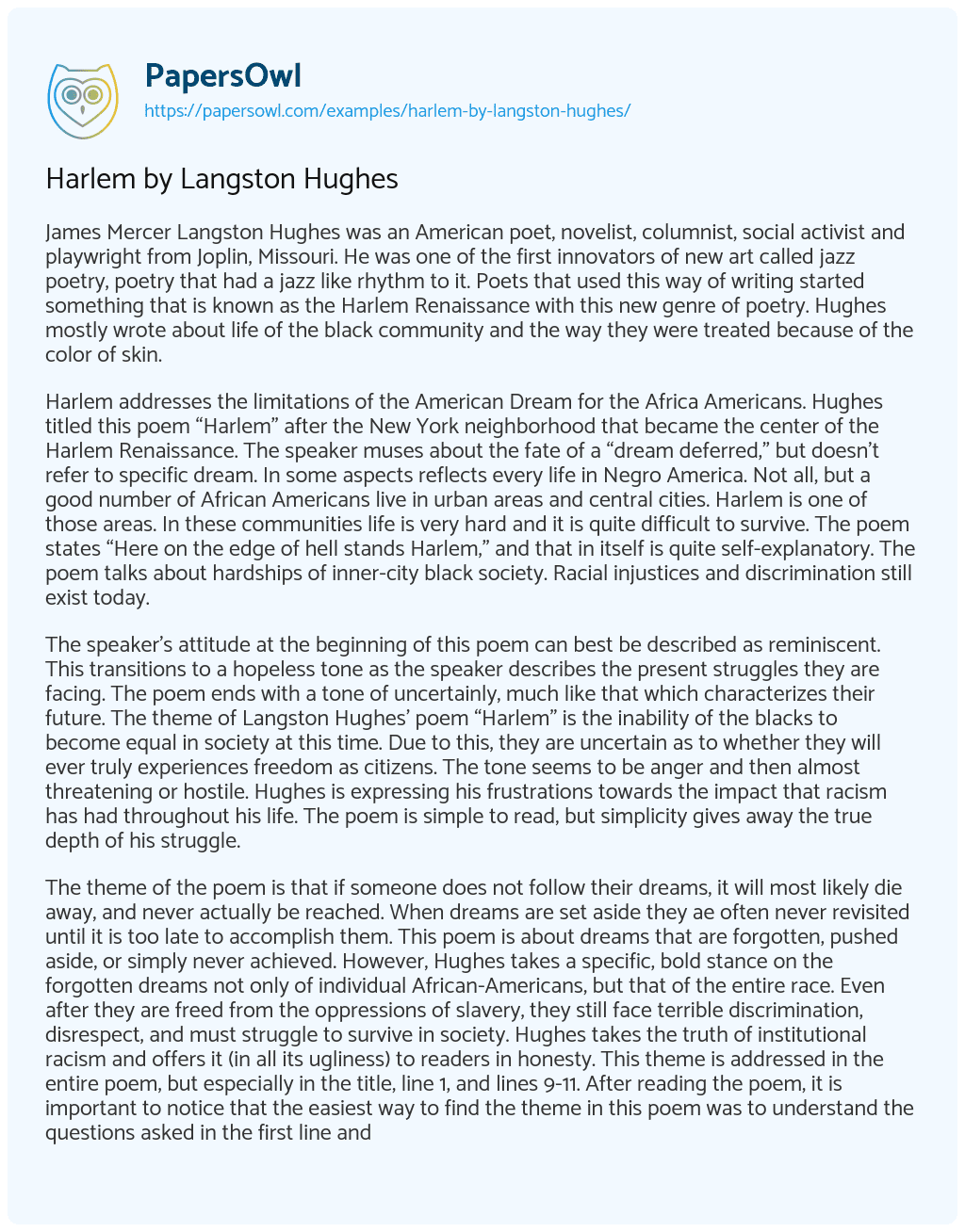 James Mercer Langston Hughes was an American poet, novelist, columnist, social activist and playwright from Joplin, Missouri. He was one of the first innovators of new art called jazz poetry, poetry that had a jazz like rhythm to it. Poets that used this way of writing started something that is known as the Harlem Renaissance with this new genre of poetry. Hughes mostly wrote about life of the black community and the way they were treated because of the color of skin.

Harlem addresses the limitations of the American Dream for the Africa Americans. Hughes titled this poem “Harlem” after the New York neighborhood that became the center of the Harlem Renaissance. The speaker muses about the fate of a “dream deferred,” but doesn’t refer to specific dream. In some aspects reflects every life in Negro America. Not all, but a good number of African Americans live in urban areas and central cities. Harlem is one of those areas. In these communities life is very hard and it is quite difficult to survive. The poem states “Here on the edge of hell stands Harlem,” and that in itself is quite self-explanatory. The poem talks about hardships of inner-city black society. Racial injustices and discrimination still exist today.

The speaker’s attitude at the beginning of this poem can best be described as reminiscent. This transitions to a hopeless tone as the speaker describes the present struggles they are facing. The poem ends with a tone of uncertainly, much like that which characterizes their future. The theme of Langston Hughes’ poem “Harlem” is the inability of the blacks to become equal in society at this time. Due to this, they are uncertain as to whether they will ever truly experiences freedom as citizens. The tone seems to be anger and then almost threatening or hostile. Hughes is expressing his frustrations towards the impact that racism has had throughout his life. The poem is simple to read, but simplicity gives away the true depth of his struggle.

The theme of the poem is that if someone does not follow their dreams, it will most likely die away, and never actually be reached. When dreams are set aside they ae often never revisited until it is too late to accomplish them. This poem is about dreams that are forgotten, pushed aside, or simply never achieved. However, Hughes takes a specific, bold stance on the forgotten dreams not only of individual African-Americans, but that of the entire race. Even after they are freed from the oppressions of slavery, they still face terrible discrimination, disrespect, and must struggle to survive in society. Hughes takes the truth of institutional racism and offers it (in all its ugliness) to readers in honesty. This theme is addressed in the entire poem, but especially in the title, line 1, and lines 9-11. After reading the poem, it is important to notice that the easiest way to find the theme in this poem was to understand the questions asked in the first line and at the end of the poem line.”

Harlem by Langston Hughes. (2021, May 10). Retrieved from https://papersowl.com/examples/harlem-by-langston-hughes/

The Use of Symbols in Langston Hughes’ Harlem