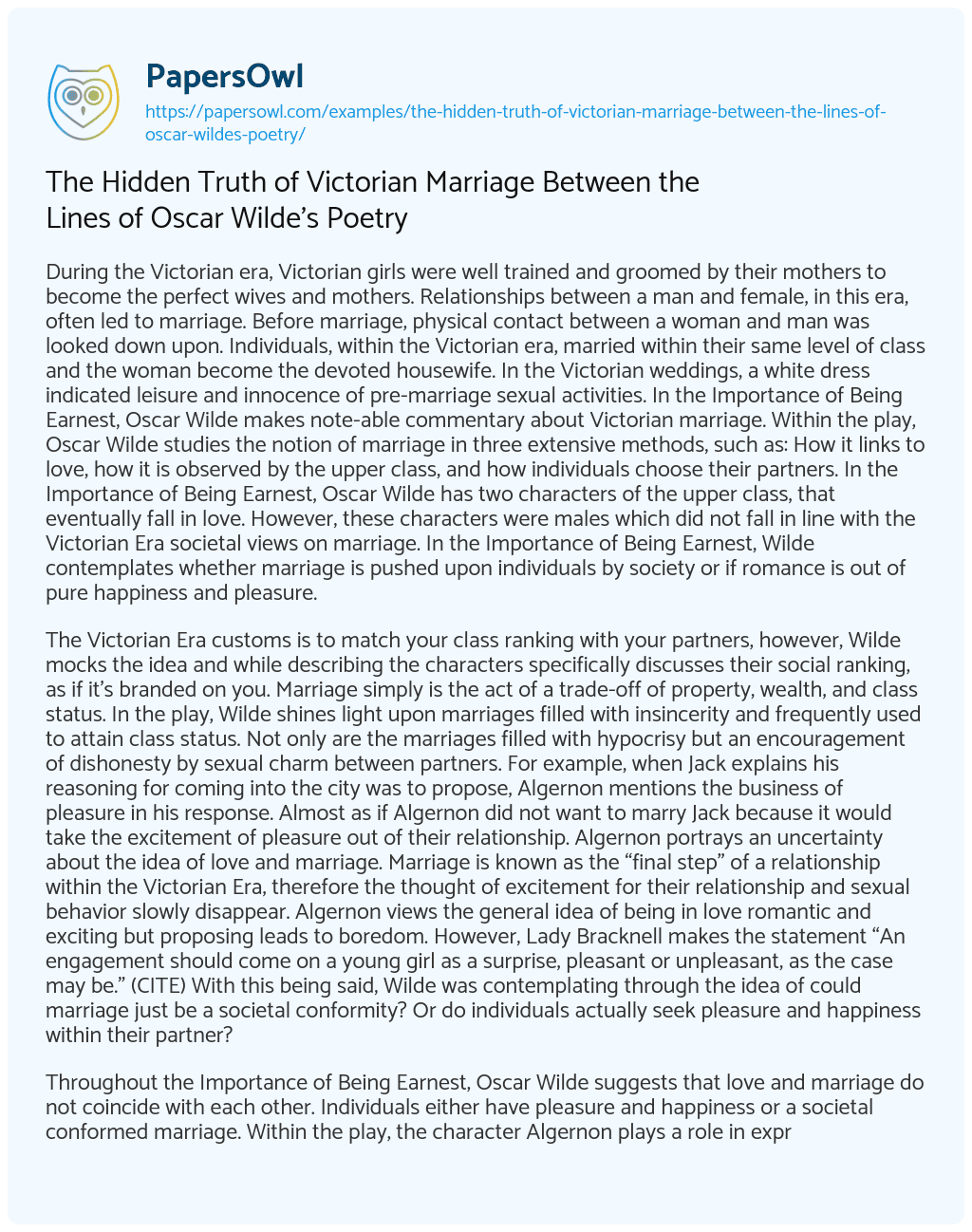 During the Victorian era, Victorian girls were well trained and groomed by their mothers to become the perfect wives and mothers. Relationships between a man and female, in this era, often led to marriage. Before marriage, physical contact between a woman and man was looked down upon. Individuals, within the Victorian era, married within their same level of class and the woman become the devoted housewife. In the Victorian weddings, a white dress indicated leisure and innocence of pre-marriage sexual activities. In the Importance of Being Earnest, Oscar Wilde makes note-able commentary about Victorian marriage. Within the play, Oscar Wilde studies the notion of marriage in three extensive methods, such as: How it links to love, how it is observed by the upper class, and how individuals choose their partners. In the Importance of Being Earnest, Oscar Wilde has two characters of the upper class, that eventually fall in love. However, these characters were males which did not fall in line with the Victorian Era societal views on marriage. In the Importance of Being Earnest, Wilde contemplates whether marriage is pushed upon individuals by society or if romance is out of pure happiness and pleasure.

The Victorian Era customs is to match your class ranking with your partners, however, Wilde mocks the idea and while describing the characters specifically discusses their social ranking, as if it’s branded on you. Marriage simply is the act of a trade-off of property, wealth, and class status. In the play, Wilde shines light upon marriages filled with insincerity and frequently used to attain class status. Not only are the marriages filled with hypocrisy but an encouragement of dishonesty by sexual charm between partners. For example, when Jack explains his reasoning for coming into the city was to propose, Algernon mentions the business of pleasure in his response. Almost as if Algernon did not want to marry Jack because it would take the excitement of pleasure out of their relationship. Algernon portrays an uncertainty about the idea of love and marriage. Marriage is known as the “final step” of a relationship within the Victorian Era, therefore the thought of excitement for their relationship and sexual behavior slowly disappear. Algernon views the general idea of being in love romantic and exciting but proposing leads to boredom. However, Lady Bracknell makes the statement “An engagement should come on a young girl as a surprise, pleasant or unpleasant, as the case may be.” (CITE) With this being said, Wilde was contemplating through the idea of could marriage just be a societal conformity? Or do individuals actually seek pleasure and happiness within their partner?

Throughout the Importance of Being Earnest, Oscar Wilde suggests that love and marriage do not coincide with each other. Individuals either have pleasure and happiness or a societal conformed marriage. Within the play, the character Algernon plays a role in expressing how love and marriage work against each other. Before marriage, you have the excitement of lust, pleasure and slight movements of sexual arousal through eating but once marriage happens, the enthusiasm vanishes. During a conversation with his servant, Lane, Algernon questions the difference between the keeping of champagne and wine within an individual’s household. ”I attribute it to the superior quality of the wine, sir. I have often observed that in married households the champagne is rarely of a first-rate brand.” Therefore, Oscar Wilde uses the champagne and wine as symbols of individuals before and after marriage. Champagne is characterized as a fun, bubbly, celebration beverage; However, wine is known as a smooth, mellow and matured beverage. Algernon mocks the idea of marriage being based of societal conformities instead of romance. Algernon truly believes that no one could possibly be truly happy in an unexciting, routine based marriage. However, Algernon’s butler, Lane, portrays a different view on love and marriage. Algernon asks Lane if he believes if love and marriage is demoralizing, Lane responds “I believe it is a very pleasant state, sir” (CITE). Although Wilde does not have Lane speak much throughout the play, this specific line describes his output on the topic of love and marriage. Lane believes that if two individuals love each other, marriage being the final step, would enhance the love between them. Wilde adding this line to the play, allows the reader to grasp the different views between different classes. Algernon, being of the upper class, wants to go through life being a bachelor. However, Lane, being of the working class, believes that marriage is a symbol of love and that it can further the emotions of love shared between individuals. This also portrays the idea of the higher class marrying solely for money and class while the working and lower class marry for love.

Within the Importance of Being Earnest, Oscar Wilde uses food and eating as symbols for lust. Due to the views upon lust and pre-marital sexual contact during the Victorian Era, these actions were hidden by food and eating. In the play, Wilde expresses their lustful behavior between scenes of the individuals discussing food while eating. For example, when Algernon states that Gwendolen is “devoted to bread and butter” (CITE), Jack vigorously begins eating bread and butter. “Gwendolen: …my ideal has always been to love some one of the name of Ernest. There is something in that name that inspires absolute confidence. The moment Algernon first mentioned to me that he had a friend called Ernest, I knew I was destined to love you” (CITE). However, Gwendolen is infatuated with the conception of falling in love with someone named Ernest. Therefore, Algernon and Jack are deceitful. Although Gwendolen does not find out Jack’s true name, her love is conditional and somewhat childish, especially since her lover was chosen because of his name. She mocks other names in front of Jack which makes it clear that if he was named anything else, she would not love him. Gwendolen’s mockery of names other than Earnest, encourages Jack’s dishonesty so that she will love him. In the play, Jack’s portrayed as a straight man, who is deceitful towards Gwendolen for her love and counters Algernon’s witty humor. Jack somewhat represents the idea of living a life of responsibility in the country while in town, he is deceptive. Wilde uses Jack as a symbol of a deceptive life full of pleasure in the homosexual community. Jack lusts for Gwendolen’s hand in marriage and will lie to her face, in order to get what he wants.

In the Importance of Being Earnest, Wilde discusses a character known as Lady Bracknell. Lady Bracknell is a character who married primarily for money but remains hypocritical towards others’ marriages. In the play, Lady Bracknell supposedly disapproves of “mercenary marriages”, however she married more for money than a livelong partner. Lady Bracknell expresses, “When I married Lord Bracknell I had not fortune of any kind. But I never dreamed of allowing that to stand in my way” (CITE). Throughout this statement, it is almost as if Lady Bracknell is blankly saying that she just married him for money. In the statement, she did not mention the emotion of love or pleasure, just fortune. Oscar Wilde characterizes Lady Bracknell as shallow, in order to mock the social morals of the Victorian era. Not only is Lady Bracknell used to mock the social morals of the Victorian era, but Dr. Chausible quickly reverses his views upon marriage quickly throughout the play. For example, when Dr. Chausible proposes to Miss Prism, he expresses that the “Primitive Church did not condone marriage” (CITE). However, he displays a strong desire to marry Miss Prism. By using such reversals, Wilde shines light upon the hypocrisy and foolishness in the social morals of the Victorian era social standards.

The Hidden Truth of Victorian Marriage Between the Lines of Oscar Wilde’s Poetry. (2021, Mar 20). Retrieved from https://papersowl.com/examples/the-hidden-truth-of-victorian-marriage-between-the-lines-of-oscar-wildes-poetry/

Essay about “The Importance of being Earnest” by Oscar Wilde

Trivialization in the Victorian Era

“The Importance of being Earnest” by Oscar Wilde

Entertainment and Criticisms of the Victorian Era