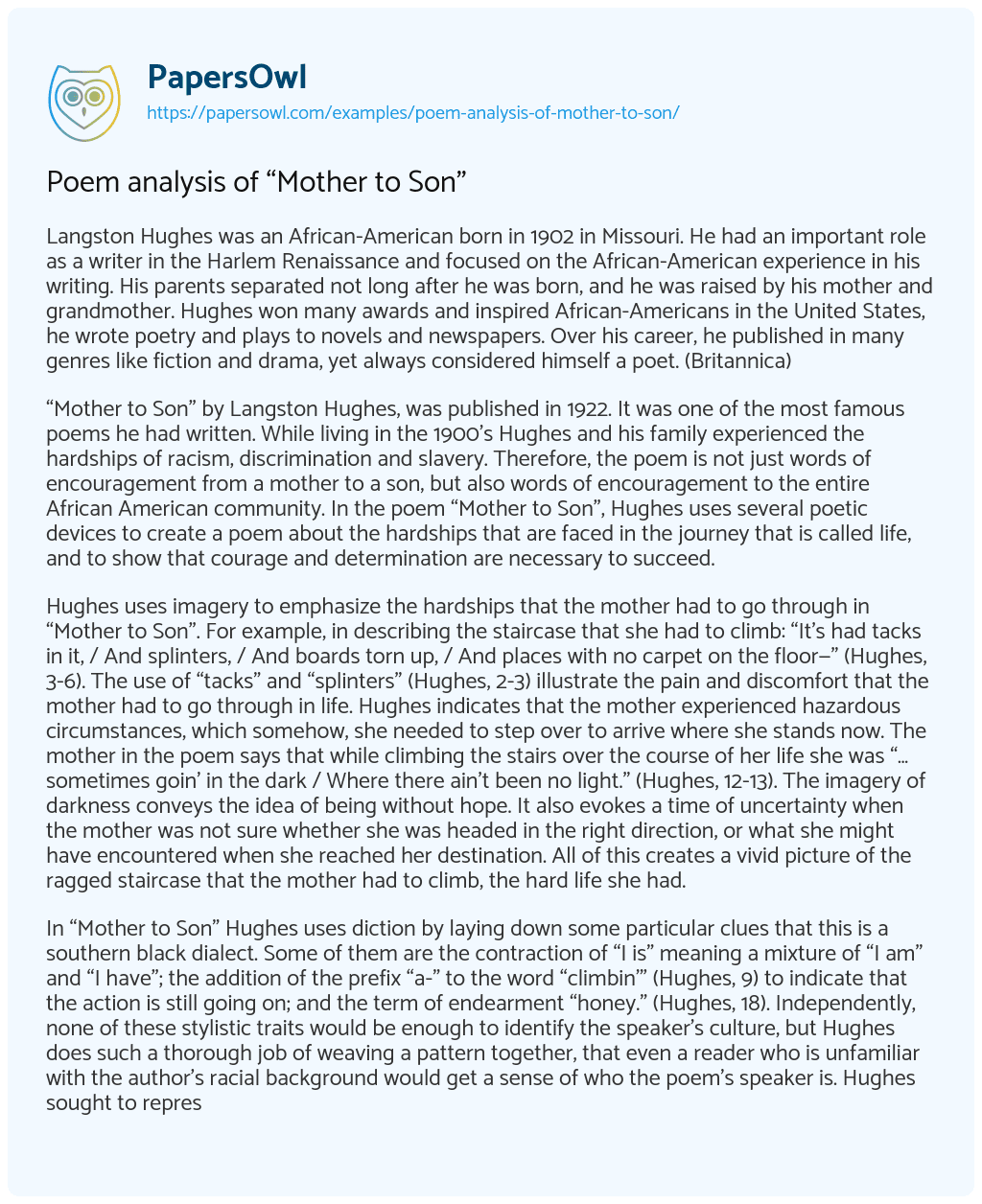 Langston Hughes was an African-American born in 1902 in Missouri. He had an important role as a writer in the Harlem Renaissance and focused on the African-American experience in his writing. His parents separated not long after he was born, and he was raised by his mother and grandmother. Hughes won many awards and inspired African-Americans in the United States, he wrote poetry and plays to novels and newspapers. Over his career, he published in many genres like fiction and drama, yet always considered himself a poet. (Britannica)

“Mother to Son” by Langston Hughes, was published in 1922. It was one of the most famous poems he had written. While living in the 1900’s Hughes and his family experienced the hardships of racism, discrimination and slavery. Therefore, the poem is not just words of encouragement from a mother to a son, but also words of encouragement to the entire African American community. In the poem “Mother to Son”, Hughes uses several poetic devices to create a poem about the hardships that are faced in the journey that is called life, and to show that courage and determination are necessary to succeed.

Hughes uses imagery to emphasize the hardships that the mother had to go through in “Mother to Son”. For example, in describing the staircase that she had to climb: “It’s had tacks in it, / And splinters, / And boards torn up, / And places with no carpet on the floor—” (Hughes, 3-6). The use of “tacks” and “splinters” (Hughes, 2-3) illustrate the pain and discomfort that the mother had to go through in life. Hughes indicates that the mother experienced hazardous circumstances, which somehow, she needed to step over to arrive where she stands now. The mother in the poem says that while climbing the stairs over the course of her life she was “…sometimes goin’ in the dark / Where there ain’t been no light.” (Hughes, 12-13). The imagery of darkness conveys the idea of being without hope. It also evokes a time of uncertainty when the mother was not sure whether she was headed in the right direction, or what she might have encountered when she reached her destination. All of this creates a vivid picture of the ragged staircase that the mother had to climb, the hard life she had.

In “Mother to Son” Hughes uses diction by laying down some particular clues that this is a southern black dialect. Some of them are the contraction of “I is” meaning a mixture of “I am” and “I have”; the addition of the prefix “a-” to the word “climbin’” (Hughes, 9) to indicate that the action is still going on; and the term of endearment “honey.” (Hughes, 18). Independently, none of these stylistic traits would be enough to identify the speaker’s culture, but Hughes does such a thorough job of weaving a pattern together, that even a reader who is unfamiliar with the author’s racial background would get a sense of who the poem’s speaker is. Hughes sought to represent African-American speech with dignity and verve for, in the hands of many white American writers, black dialect was used to preserve stereotypes of black ignorance. Hughes sought to overturn such caricatures by representing humor, strength, wisdom, and music in the plain speech of his African-American poetic personas. After carefully interpreting the mother’s insights and messages to her son, the reader recognizes that in “Mother to Son” and many of Hughes’s poems, uneducated diction signifies a lifetime of reduced opportunity rather than ignorance or lazy speech. Thus, the emotional drama of the mother’s will to persist is heightened considerably by the disadvantage that her diction bespeaks.

Langston Hughes uses free verse in “Mother to Son”. The poem is written in free verse, so it has no formal rhyme scheme. However, there are occasional rhymes such as “stair” and “bare.” (Hughes; 2, 7). The rhythm follows an informal pattern, as the poem is supposed to mimic dialogue–the way a mother would speak to her son. For example, the use of the words “ain’t” and the phrase “a-climbin’” is informal in nature. The use of free verse allows Hughes to create a poem without limitations of regular meter or rhythm.

In the poem “Mother to Son” Hughes uses repetition of consonant sounds in words that are close together. For example, the lines “Bare. / But all the time” (Hughes, 7-8) repeat the “B” sound, and the line “Don’t you set down on the steps” (Hughes, 15) repeats the “s” sound. Repetition adds to the imagery of the poem and helps support the theme. “Tell”, “ain’t”, “crystal stair”, “tacks”, “splinters”, “torn”, “places”, “carpet”, “time”, “peace”, “climb”, “corners”, “steps”: the constant repetition of p’s, t’s, and s’s render the reader completely breathless imitating the exhaustive uphill climb of stairs. Even the repeated use of specific words adds to the effect of repetition. Using the word “and” repeatedly creates a constant feeling of never-ending continuation, consequently reinforcing the theme of courage and determination, both vital factors necessary to continue the “stair climbing”. The line “Life for me ain’t been no crystal stair” (Hughes; 2, 20) is also repeated to give this idea emphasis. This poem mimics the way a person would speak, and it also includes an extended metaphor of a crystal stair–the easy path that the mother’s life has definitely not followed in her hardscrabble existence.

Hughes uses extended metaphor in the poem “Mother to Son” to conjoin life and a staircase, he says: “Well, son, I’ll tell you: / life for me ain’t been no crystal stair.” (Hughes, 1-2). The mother says to her son, that life is not an easy journey that can be stroll through. Instead, in this passage of the poem, she tells her son that life is hard, full of stumbling blocks, but one must keep climbing, one cannot turn back or sit down, because one will catch a break, a turn, a landing, and keep going. Each step symbolizes a part of her life that she had to endure. Throughout the poem “Mother to Son”, Hughes compares life to a staircase and bases his main idea around the crystal staircase. The mother in the poem compares her life to all the glorious things that it is not. Crystal is seen as beautiful, pure, clear and valuable. The mother explains that her life is not any of these things. She also showcases her life as being filled with “tacks” and “splinters” (Hughes, 3-4). These splinters and tacks are metaphors for the obstacles one encounters throughout life. They represent the harsh reality of life, as opposed to the ideal fantasy life.

In conclusion, Langston Hughes’s moving poem “Mother to Son” empowers not only the son, but also the reader with precious words of wisdom. Through the skillful use of several poetic devices, Hughes manages to create the image of a mother lovingly, yet firmly, talking to her son about life. The advice is simple but pertinent to the poetic theme: in order to overcome the hurdles of life, a person must possess courage and determination.

Poem analysis of “Mother to Son”. (2019, Mar 29). Retrieved from https://papersowl.com/examples/poem-analysis-of-mother-to-son/

Mother and Son by Langston Hughes

“Mother to Son” by Langston Hughes